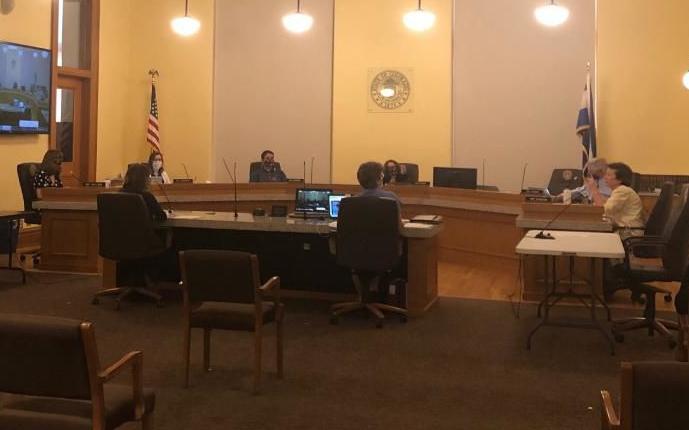 The Joint Budget Committee began meeting on Monday, May 4 to find $2 billion to $3 billion in budget cuts to balance the 2020-21 budget. The only person not wearing a mask: Rep. Kim Ransom, R-Lone Tree, at far right. Photo courtesy Rep. Daneya Esgar, D-Pueblo.

Increases in Medicaid patient copays, as approved Wednesday, May 6 by the Joint Budget Committee.

There are many emotions that can surface when as much as a quarter of the state's 2020-21 budget needs to be cut. On Wednesday, the third long day in the Joint Budget Committee's work of cutting $2 billion to $3 billion, it included some tears.

And for the third time in as many days, the committee made some cuts but for held off on some larger expense decisions.

The committee didn't consider some of the uglier — and bigger — cuts proposed by the JBC staff, and it was at that moment that the weight of those recommendations began to show.

JBC staff analyst Robin Smart could be heard sniffling and holding back tears as she offered a 25% cut to state services for those with intellectual and developmental disabilities, for a savings of $5.1 million.

"How do you decide to reduce services for people with IDD" versus those in the state's CH+P program, which provides medical services to low-income children, asked Eric Kurtz, JBC staff analyst. The committee also never considered a recommendation to completely eliminate the CH+P program, which would mean a savings of $72.7 million.

During the committee's deliberations on budget cuts to the Department of Health Care Policy and Financing, they agreed to scale down a cut to the Commission on Family Medicine, over concerns that it would impact rural hospitals. The recommended cut, at $4 million, was reduced to $1 million, but that decision will likely to be revisited at a later date.

That date is likely sometime around May 12, when the JBC gets an interim updated revenue forecast that will shed light on just how much revenue the state will lose due to the COVID-19 pandemic.

Among other considerations on Wednesday: future enrollment in the state's Program for All-inclusive Care for the Elderly. According to the JBC staff analysis, the program, under HCPF, is set up for people 55 years and older who meet nursing facility-level of care standards. They receive support for standard medical costs, behavioral health and long-term services and support.

The staff recommendation was to freeze enrollment in the program for 2020-21, which would save the state about $5.9 million, including $2.8 million in general fund.

Kurtz began his discussion by pointing out he was getting pushback over the recommendation. It didn't end there.

Lawmakers, including those outside of the JBC, pleaded with the committee to keep the program intact. But Kurtz noted that the program's providers had been asked for alternatives and didn't come up with anything. The committee decided to hold off on any changes to the program's budget.

"This is another big ticket item that we're delaying," said JBC Chair Rep. Daneya Esgar, a Pueblo Democrat. "I'll listen to members" who ask the JBC to get more information before making these decisions, but if people have ideas, they need to send them in.

That wasn't the only program that faced the budget ax and was spared.

The biggest of the day: the second year of the state's reinsurance program, which was lauded for lowering the cost of health care, especially for Coloradans on the Western Slope.

The staff recommendation was to eliminate funding for the program's second year, which would save the state $59.7 million in general fund dollars.

That didn't go over well with Rep. Julie McCluskie, a Dillon Democrat, and Sen. Bob Rankin, a Republican from Carbondale. Both were sponsors of the 2019 legislation that created the program.

This is not the time to impact people's access to health insurance, McCluskie argued.

"I hate to see us eliminate a program during a health crisis that creates more access to health insurance," especially since about 12,000 people have enrolled in the individual health insurance market since the pandemic began. Rankin added that eliminating the second year of funding would mean those who bought health insurance would face up to 50% increases in premiums.

Among the budget changes the JBC did make on Wednesday: increasing co-pays for Medicaid patients.

Earlier Wednesday, the JBC also looked at potential cuts to the Department of Transportation and transportation funding, as well as for capital construction.

The recommendations on transportation included asking the committee to persuade lawmakers not to seek a ballot measure in November to raise taxes for transportation funding. It won't fly in the state's current situation, explained JBC staff analyst Steve Allen.

The transportation department escaped relatively unscathed, due largely to the fact that it gets no general fund dollars. The one cut the JBC made was to eliminate some of the funding for an education program — funded by marijuana tax revenues — for those who drive while under the influence of marijuana. That program, according to the JBC analysis, targets young men. The cut of $500,000 leaves some of the program's funding intact.

The only other issue, and it's a big one, was what to do about a $50 million payment on certificates of participation tied to Senate Bill 17-267. That law included several opportunities to fund road and bridge construction, including in rural communities. The JBC, as it has done with other big ticket items, postponed a decision, although Allen said the department is willing to cover those payments out of sources other than general fund.

Capital construction, often a go-to for big budget cuts, was left relatively intact, due to advocacy from some committee members for some of the projects on the list approved back in March.

The approved list had $321.5 million in prioritized projects, including $166.5 million from the state's capital construction fund. The staff recommendation, to reverse the JBC's March decisions, would save $201.6 million in state funds. The committee voted to suspend depreciation lease payments for six departments, saving $7.5 million, and to authorize transfers into the general fund of $19.7 million.

The committee took no official position on another JBC staff recommendation: asking the sponsors of SB 20-003 to postpone the bill indefinitely. The measure is currently awaiting action from the House Finance Committee, and would pay for improvements at state parks and for the purchase of Fishers Peak, a new state park designated by executive order last September by Gov. Jared Polis. Killing the bill would save $6 million.

Esgar is one of the bill's sponsors.

No member of the Joint Budget Committee has been in the legislature long enough to take part in any budget-cutting pain that occurred in previous years, although many members of the staff have. Here's where cuts have come from in past economic downturns.