The Governor's Office of State Planning and Budgeting has directed most state agencies to pare more than $43 million in general and cash funds from their 2019-20 budgets. But that's only the start — the budget office warns that revenue reductions may continue for the next three years.

The budget cuts will be a tall order for agencies that are less than three months from the end of the fiscal year. Most hard hit: the Department of Health Care Policy and Financing, which has been given a target of $20 million.

To put those numbers into perspective, that's equivalent to an $80 million cut for an entire fiscal year.

Few agencies are spared. Human Services has a goal of $16.8 million; Public Safety, $1.2 million and Corrections, $800,000, at a time when the agency is struggling to find (and pay for) beds in the wake of the closure of the Cheyenne Mountain Re-entry Center, which closed for good on March 7.

Even the state Department of Public Health and Environment, the lead agency for dealing with COVID-19, isn't spared: their cut is $217,842. 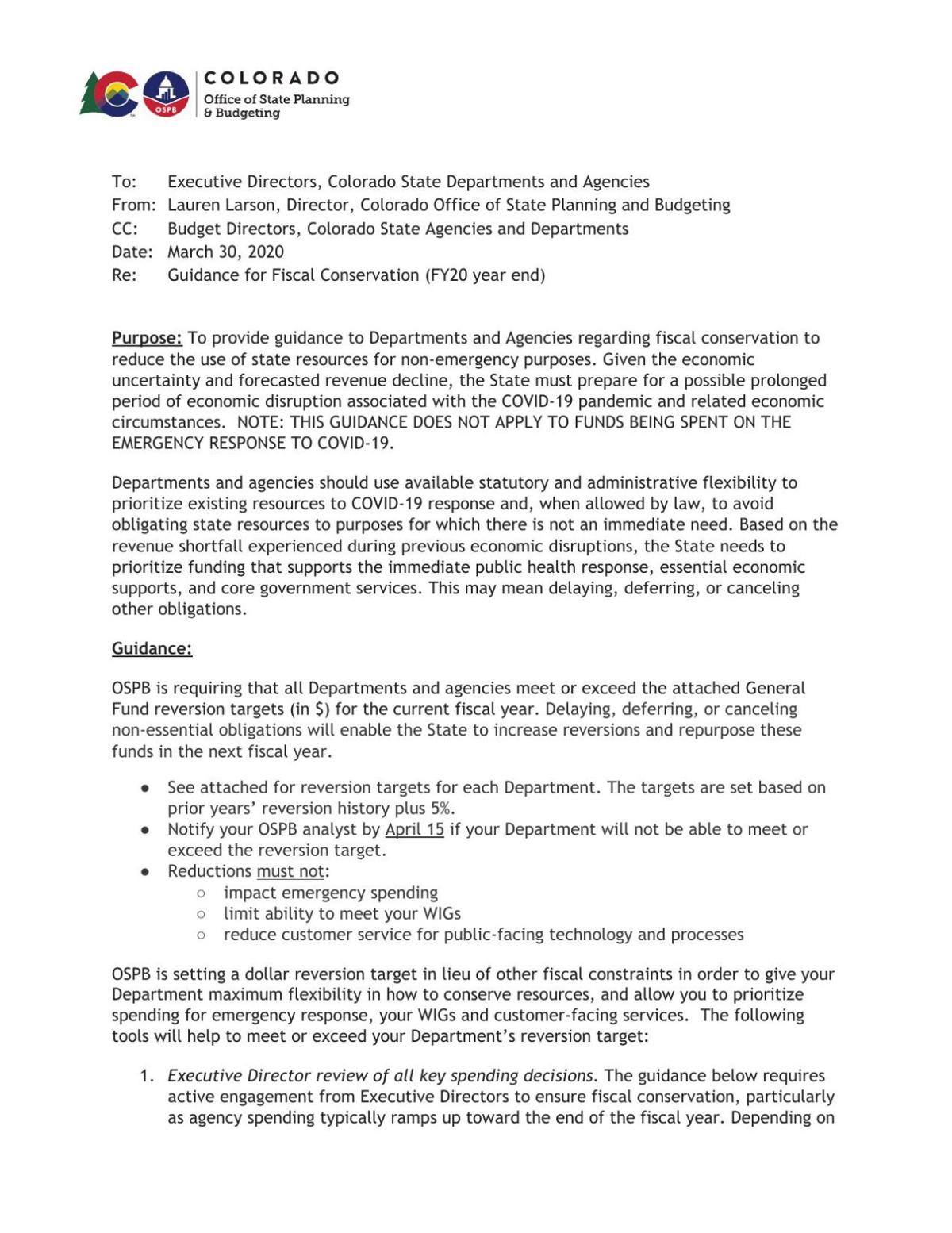 Among the agencies exempted from cuts: agriculture, transportation, labor and employment and judicial, as well as the constitutional offices: treasury, secretary of state and law/attorney general.

The governor's office has a $1.3 million target*.

The March 30 OSPB memo doesn't stop at providing budget targets. It also discourages agencies from hiring, either for vacant or new positions, and instructs agencies to delay entering into new contracts unless those contracts "supply critical necessary work." Contracts that are no longer essential should be terminated, the memo said.

Agencies also should hold off on implementing programs that came out of legislation in the 2018 and 2019 sessions, the memo said, and if an executive order is needed to accomplish that, ask for it.

Existing grants that have not been awarded or disbursed should be put on hold, as should capital or information technology projects.

"Once non-essential funds and commitments go out the door, resources are hard to reclaim," the memo concludes. "Departments must act now to ensure the State is prepared to manage what may be a minimum of three years of revenue reductions."

The one caveat is that revenue reductions must not impact emergency spending, limit the ability of an agency to meet "Wildly Important Goals" (a term used by the Polis administration to talk about key strategies) nor reduce customer service for "public-facing technology and processes."

Several agencies contacted by Colorado Politics gave some indication of how they plan to manage those cuts, and whether they have any programs they intend to put on hold.

The Department of Human Services does have programs that could fit the criteria that seeks 2018 and 2019 programs to put on hold. Spokeswoman Madlynn Ruble said Friday that "we have many programs that fit the criteria, but at this time we don't know of any that will be delayed. We do not have a fully agreed upon plan" at this time, she said. As to the budget cut, the agency has not yet come up with a plan on how to manage it.

Corrections spokeswoman Annie Skinner said in an email that the department "typically reverts a small percentage of the annual general fund budget each fiscal year due to underutilization in budget lines set for specific expenditures." That should cover the cut, she explained. Corrections also does not have any programs tied to legislation from 2018 or 2019 that would meet the criteria "in a material way," hence, they will meet their reduction obligations "using other resources."

At Health Care Policy and Financing, the reductions will be covered by spending less on elective surgeries — already on hold due to executive orders from the governor — and dentistry, according to spokesman Marc Williams.

The directive comes in the wake of revenue forecasts on March 17 that said state revenues could be down more than $800 million from December 2019 projections. Numbers since then indicate a budget shortfall in 2020-21 of $2 billion to $3 billion, according to Speaker of the House KC Becker of Boulder, who spoke to reporters earlier Thursday.

"We can deal with the current budget year with reserves," Becker said, but writing the 2020-21 budget will be "incredibly difficult ... .  Every week, the numbers get worse," she said, and how short the state will be changes from week to week. "We have at least a $2 billion shortfall" heading into the next budget year. "Where we will find $2 billion to $3 billion in cuts, that's what folks are working on right now."

Correction: a previous version left out the target for the governor's office.

Polis also reported that Colorado has asked the federal government for 2 million N95 masks, 10,000 ventilators, 880,000 face shields and 720,000 surgical gowns. What Colorado is getting is just a fraction of that.