In all, the governor issued nine executive orders to end the month of April. The orders are in place for 30 days unless extended by the governor.

The state doesn't have the money to continue the functions of state government for the balance of the 2019-20 fiscal year, Polis wrote in D2020-050. The executive order cancels out or suspends $228.7 million in expenditures. The vast majority of the cuts — $183 million — will come from the state's Medicaid services program within the Department of Health Care Policy and Financing.

In a March 30 memo, the governor's budget staff told state agencies to find programs that could be suspended or cancelled, and much of what's in the rest of the cuts are from those programs. Within the department of higher education, that includes educator loan forgiveness programs, scholarships, teacher mentors and teaching stipends, all totaling about $2.1 million.

But a letter from OSPB's Lauren Larson that accompanied the executive order noted that what's outlined in the order would mean the state would not have to enact across-the-board cuts, and also would not result in mandatory furloughs or layoffs for state employees. "[W]e want to ensure we have a strong, stable state workforce as we manage the challenges presented by the COVID-19 pandemic," Larson wrote.

The OSPB letter states that reductions are targeting: 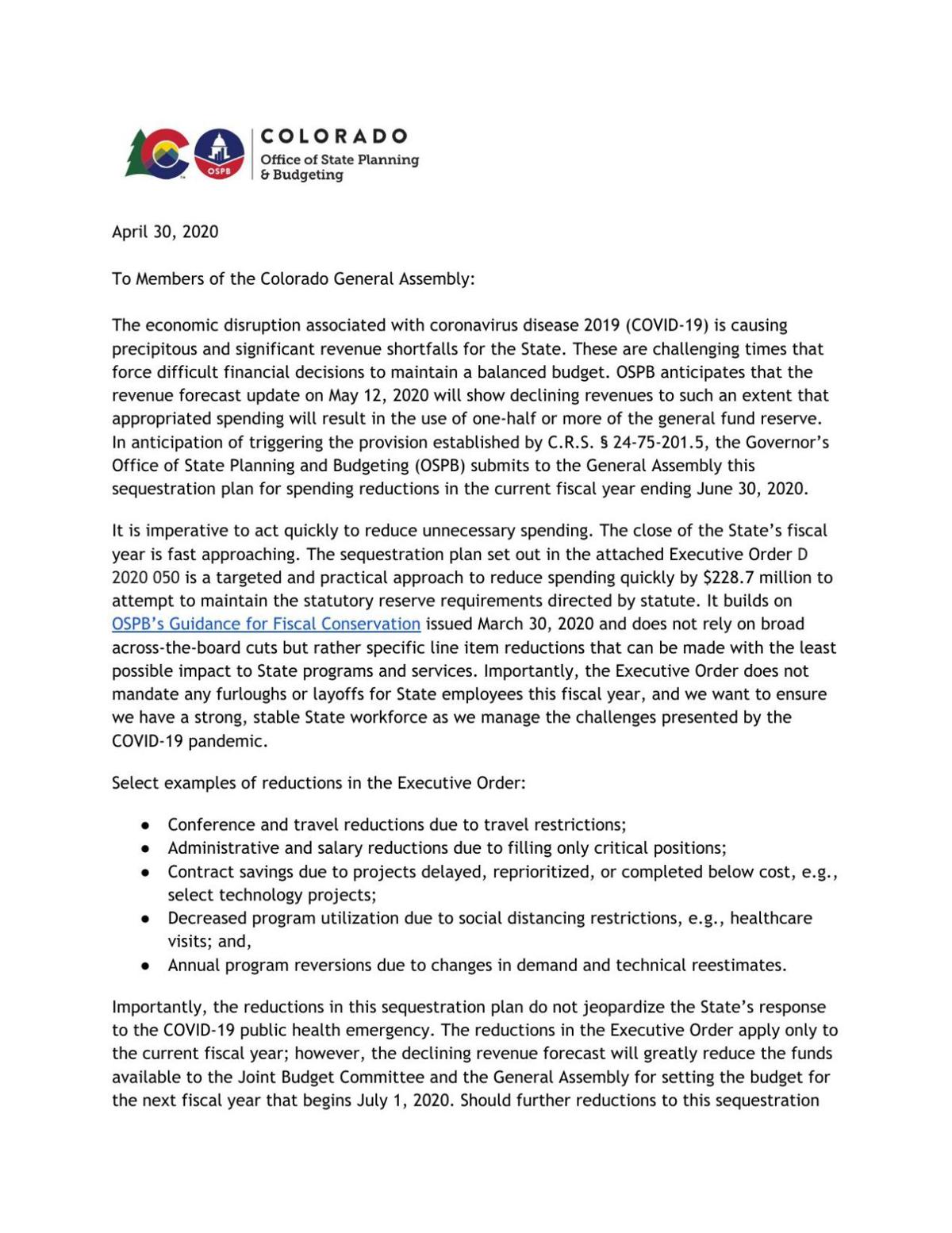 Polis also issued an order extending the ban on evictions due to nonpayment. In the extension (D2020-051), Polis said "to be Safer at Home, Coloradans must continue to have a home ... . Many Coloradans experienced substantial loss of income as a result of business closures and layoffs, hindering their ability to keep up with their rent or mortgage payments and threatening their housing security," Polis wrote. Several groups have advocated for Polis to cancel rent payments, but he has said he does not have that authority.

The order also extends to limitations on foreclosures and public utility disconnects, and continues to require expedited payment of unemployment insurance claims.

Among the rest of the executive orders, Polis extended the closure of Colorado's downhill ski resorts to May 23 (D2020-49); extending the suspension of regulatory statutes, including in-person medical visits to obtain medical marijuana licenses (D2020-052); allowing for remote notarization (D2020-47). And you can still get an online marriage license under an extension of a previous order tied to the closures of county clerk and recorder offices (D2020-048).

Polis also issued an order allowing unaffiliated candidates to delay petitions to get onto the ballot for November until June 1 (D2020-053). Those petitions can be circulated through July 27, the order states.

The budget cuts will be a tall order for agencies that are less than three months from the end of the fiscal year. Most hard hit: the Department of Health Care Policy and Financing, which has been given a target of $20 million.