Gov. Jared Polis sought to avoid conflicting regulations when he asked the state health department to relax COVID-19 restrictions in 33 counties, he told Colorado Politics in an interview Thursday.

The decision was made as a matter of "regional cohesion," he said, to avoid a patchwork of orange and red counties. Several counties, including Douglas and Larimer, are already implementing the state's new five-star program, but others, such as El Paso, have been a little slower.

"You want to move as a unit," Polis explained. "We are comfortable with pushing everyone in that direction ... and we feel good enough about the numbers that a shift is warranted and ready and in the interest of public health and the economy.

"The alternative to moving together is to allow some counties to go to orange ahead of others. That would have been challenging from a public health perspective," Polis said, raising the risk that people from high incidence areas would go to restaurants in lower incidence areas. "You need to acknowledge all are interconnected and move together."

The governor, in social media posts late Wednesday night, announced that he was requesting that counties at the red level on the state public health department’s dial move to orange, effective next Monday.

It was the second announcement of the day to take those most affected by surprise; at a press conference earlier in the day he announced a change in the state’s priority list for vaccinations.

Polis’ 9:12 p.m. tweet said he was taking the action because the state has been in a “sustained decline for 13 days, and only 73% of ICU beds statewide are in use. This is a direct result of Coloradans stepping up and taking the steps to protect themselves and others.”

Polis said he was also excited that the state had avoided another lockdown, but still encouraged people to take the basic steps to continue to protect themselves from the COVID-19 virus.

Everyone should be aware that that as long as the incidence level remains high, he said, people should continue to take precautions, including with those they interact with outside of the home: wear masks, maintain social distance and avoid socializing with those outside of your own household. "That's what's led to the positive trend in hospitalizations," he said.

Despite Polis’ claim that only 73% of ICU beds are in use, in some parts of the state, there are few or even no ICU beds available at all, according to CDPHE data. Out of the 11 areas in the state’s Regional Emergency Medical & Trauma Services Advisory Councils, which tracks ICU bed availability, eight have less than that 27% availability. Only southwestern Colorado, the Foothills region that includes Polis’ home county of Boulder, and the northwest Colorado region have 27% or more availability for ICU beds.

In southeastern Colorado, where every county is at the red level, there are only four available ICU beds and they all are in use, according to CDPHE data.

That region includes one state prison and two private prisons that are reporting massive outbreaks of COVID-19. As of Wednesday, the private Bent County Correctional Facility in Las Animas has reported 727 cases among inmates, and an additional 54 among the staff, in an outbreak that began in November. One inmate died last week.

COVID-19 deaths among Colorado prisoners more than double in December

Bent County had two other outbreaks in November and December at nursing facilities, with a total of 26 cases among the residents and staff. The county’s two-week positive rate is 14.5%. Crowley County’s only assisted living facility has 66 positive cases among staff and residents from a November outbreak.

In the San Luis Valley, 14 ICU beds are available and all but three are in use.

The greatest number of available ICU beds, according to CDPHE data, is in the Denver-Boulder area.

Polis told Colorado Politics that there isn't a strong nexus between prison populations and COVID-19 cases outside of the prisons. The bulk of those incidents are in the prisons, he said, not from prisoners who are frequenting restaurants. However, county commissioners have said in the past that correctional workers don't live in those counties; many commute from Pueblo, and some could be taking the virus from the prison to the Pueblo area. Polis said that fact is why the state was closely tracking hospitalizations in Pueblo County, which had some of the highest hospitalization numbers in the state just a couple of weeks ago.

While Polis wants counties to move to less restrictive levels, at the same time he said he would ask the Centers for Medicare and Medicaid Services to allow Colorado to pause visitation at nursing homes until those residents and staff can be vaccinated. As of Wednesday, 667 residents of long-term care facilities, including nursing and group homes; assisted living, memory care and rehab facilities, have died from the virus.

Moving counties from red to orange means restaurants can reopen for indoor dining at 25% capacity or a maximum of 50 people. That gives owners just a few days to round up staff who may have been laid off or furloughed.

Restaurant workers to Polis: you left us off the vaccine list

Chris Fusilier, owner of the Blake Street Tavern in LoDo, had planned to close his restaurant temporarily and for the foreseeable future on Jan. 4. He said Thursday he will bring back 35 furloughed staff. “Football, basketball, baseball and soccer games, here we come!” he tweeted.

But Polis’ decision has once again caught counties and cities by surprise and points to a continuing lack of communication between the governor’s office and local governments.

In November, the Metro Mayors Caucus pleaded with Polis to keep them better informed.

“We understand that we are all learning as we go, but nine months into this crisis, there is widespread agreement that we must improve communication and coordination,” the caucus letter of Nov. 23 said. “Like our healthcare network, our counties and cities are interdependent and our actions — or inaction — have ramifications beyond our boundaries.”

The letter was signed by 26 of the 38 mayors in the caucus, including the mayors of Denver and Boulder.

Caucus chair Mayor Marc Williams of Arvada was among several who said Thursday they were taken by surprise by the announcement that red counties could move to orange. He told 9News’ Kyle Clark that he supports the move but said the lack of communication from Polis is “more than frustrating. We told the governor earlier that we were not happy with his unilateral announcements without giving us a heads up, he has now done it again." 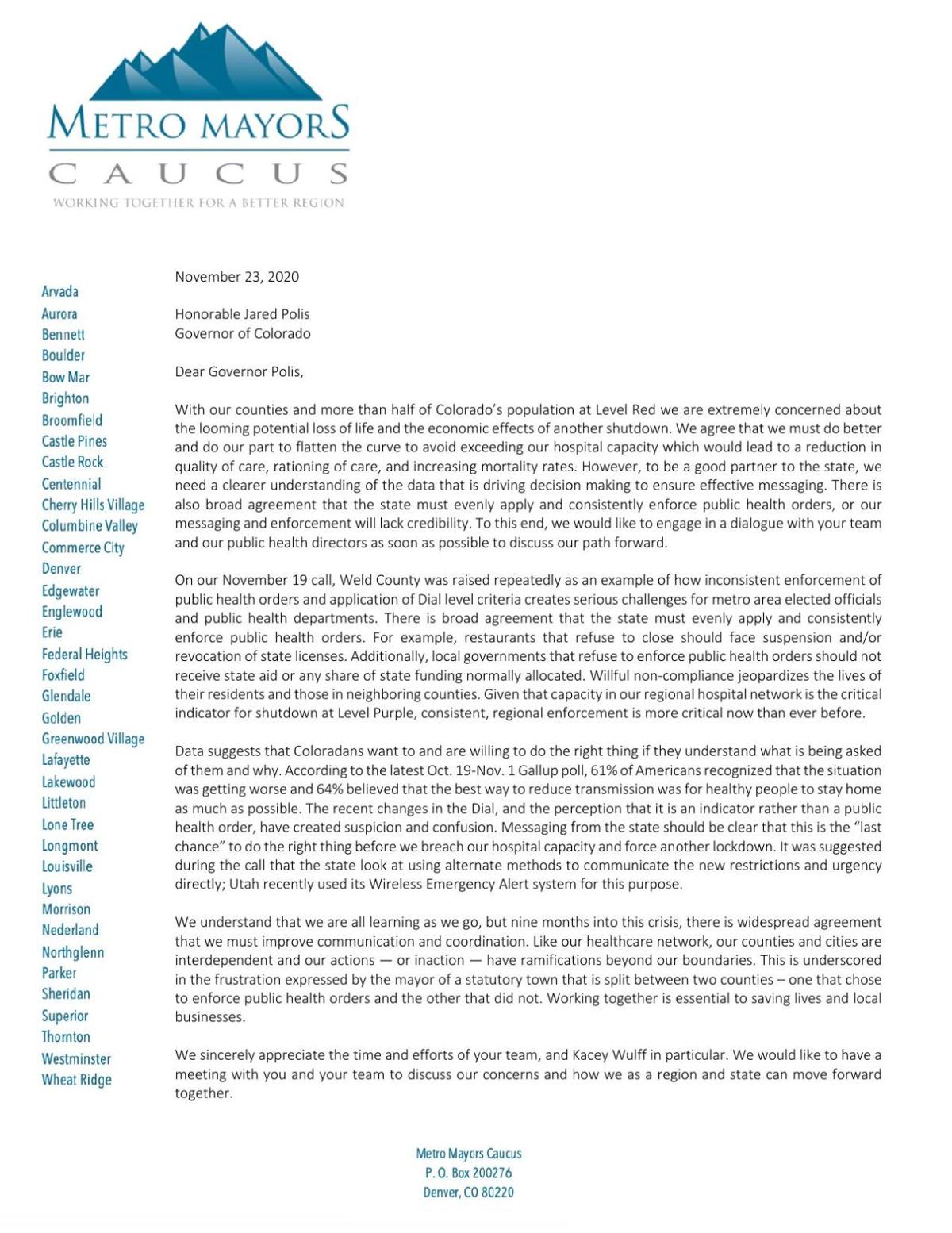 Polis, however, told Colorado Politics that he talks regularly with local electeds.

"We got a lot of input that many cities and counties wanted to move in this very direction. We're being responsive to that, consistent with what the mayors and commissioners wanted," he said. He also pointed out that counties got five days' warning on this, out of respect to restaurants that will have time to get supplies in and get their staff back.

"It gives everyone time to prepare for it," he said.