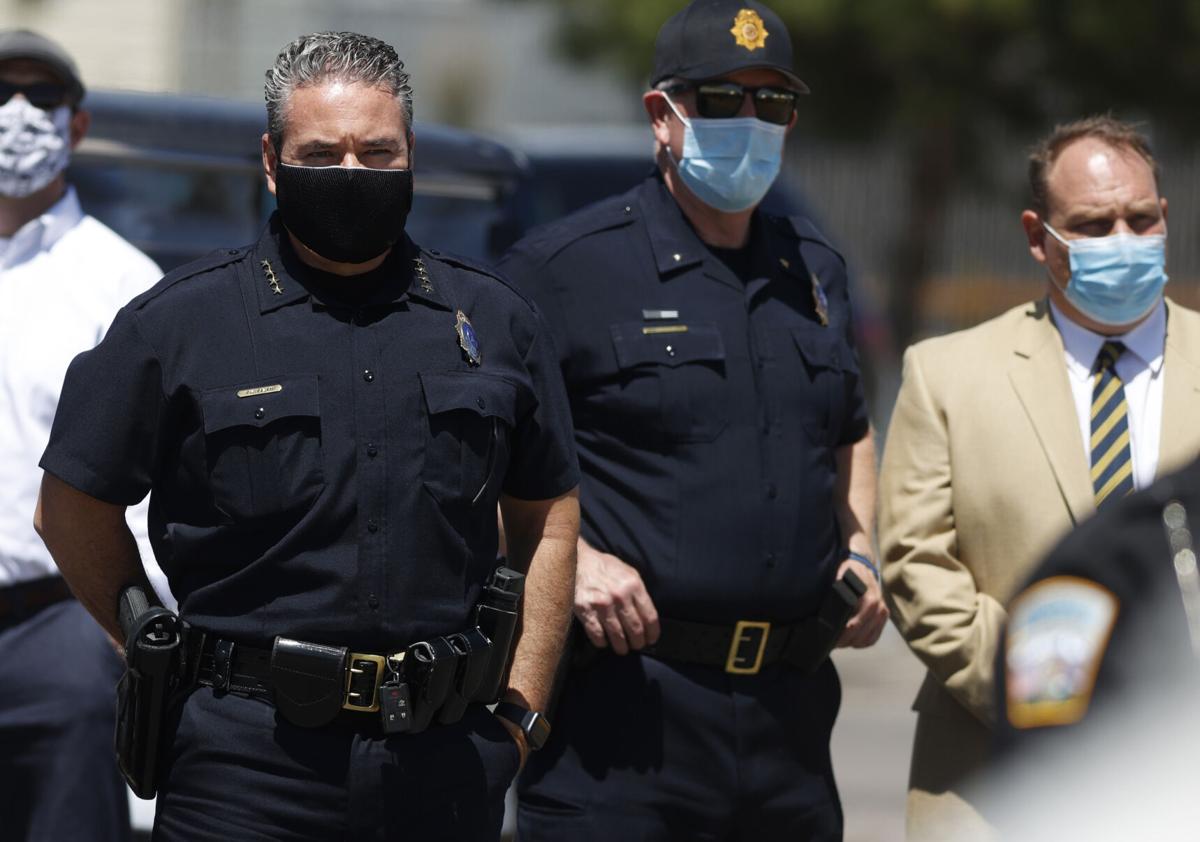 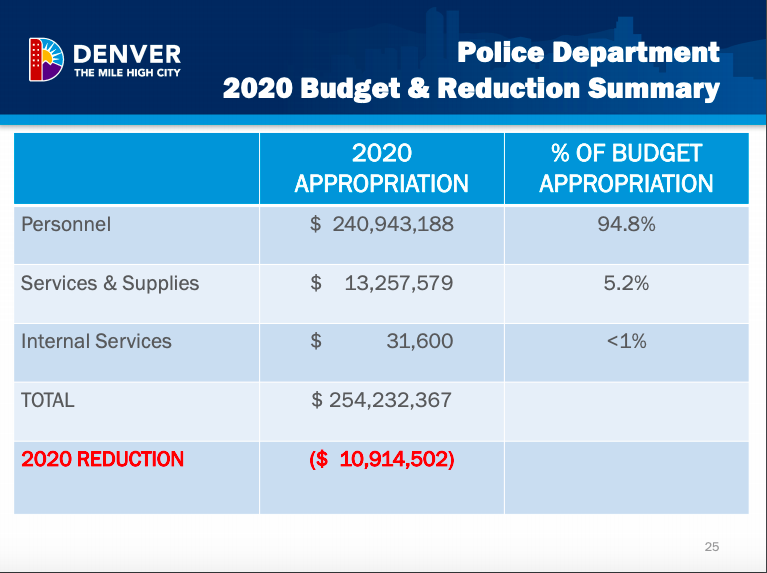 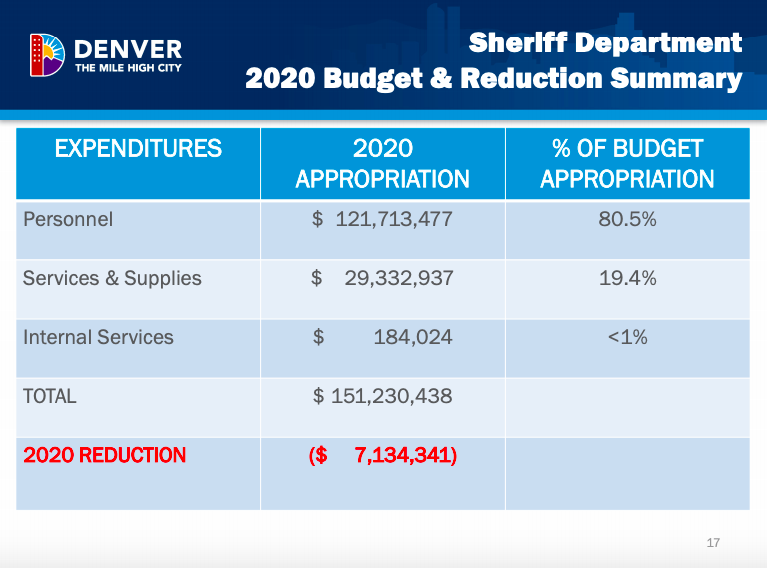 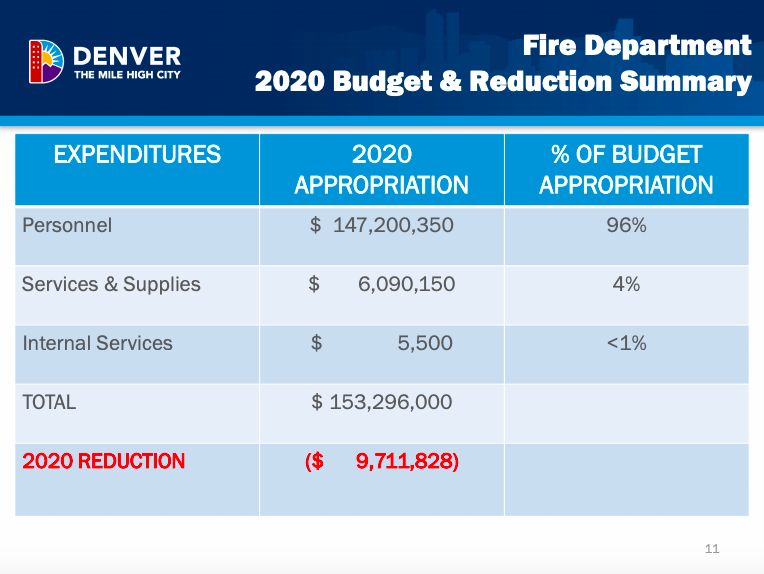 Colorado's capital city is facing a $227 million budget shortfall due to the pandemic, and it has mandated that every department propose slashes to their 2020 budgets to help weather the storm.

The city’s $588 million budget for the Department of Public Safety includes the police, sheriff and fire departments, and most of the dollars fund personnel. The economic fallout from the coronavirus has meant that the departments collectively had to cut their budgets by $30.4 million, or about 5%, as required by Mayor Michael Hancock’s administration.

More budget reductions lie ahead as the city shapes its 2021 budget, to be finalized this fall, in the wake of a major recession. Meanwhile, cries to defund the police loom over elected officials’ heads.

“In terms of the crime statistics that we’re looking at in 2020 and the significant rise, particularly in violent crime, how do we balance this need for budget cuts with the need for community safety and the fact that we have residents who are crying out for more support?” Denver Councilwoman Amanda Sawyer asked safety officials Thursday during the Denver City Council’s Budget and Policy Committee meeting.

The city has recently seen a surge in violent crime, particularly shootings and killings. Sawyer represents East Colfax in District 3, one of the neighborhoods with the highest number of murders.

“That’s the $20 million question, Councilwoman,” said Murphy Robinson, the director of public safety. “I don’t have a secret sauce. However, know that my goal is to make sure we can continue to provide services to our joint constituents because that’s what’s needed, especially during this time of unrest.”

Robinson's department, which was allotted nearly $29.6 million in 2020, has cut more than $2.6 million from its budget.

The Denver Police Department, which represents about 43% of the entire public safety budget with $254.2 million in its wallet, slashed $10.9 million from its budget this year.

“There are downstream impacts of this,” Police Chief Paul Pazen told the council’s Budget and Policy Committee. The reductions primarily mean the “significant number of officers” that were appropriated for 2020 will not be hired, Pazen said.

“We’ve also cut some positions or not filled some supervisory positions,” he said.

The Denver Fire Department, which is led by interim fire Chief Todd Bower, slashed its $153.2 million budget by about $9.7 million.

“What we did is we reduced some of the uniforms that work in support positions, that do fire prevention activities and other aspects to fire trucks in the city,” Bower told the committee. The fire department is also deferring its recruit class until next year, as well as giving up some of its savings.

The Denver Sheriff Department is slashing about $7.1 million from its $151.2 million budget this year.

The primary reduction came with reducing the inmate count, newly appointed Sheriff Elias Diggins said. Denver’s jail population has been down by about 45% since March to help curb the spread of the coronavirus pandemic, as jails and prisons have proven to be hotspots in Colorado and across the country.

With fewer mouths to feed and bodies to clothe, the sheriff department was able to cut costs. Diggins said there were also vacancy savings from civilian positions that were used.

Because jails and prisons already have cameras, body cameras for sheriff deputies were not required in Senate Bill 217.

Diggs said the sheriff department will reintroduce this request to have body cameras inside the jail as he works with the Hancock administration in the 2021 budget process.

Denver Councilwoman At Large Robin Kniech was not pleased with the presentation. It lacked detail, and therefore meaning, she said.

“I think that if we’re going to engage more robustly … and you want input from this council on where cuts will be made — whether it’s for the budget crisis or whether it’s for moral and ethical readjustments of priorities — we have to be in the line items to have that conversation,” Kniech said.

But Robinson redirected the blame.

“The fact that you guys gave us less than 40 minutes to discuss one of the largest departments in the city does not give us the time to give you context behind these things,” he said. “If we want to actually discuss this stuff in detail, give us the time to talk about it."

Council President Stacie Gilmore interjected and said the council did not receive the slide deck in advance to the presentation. Kniech added that the presentation, which was nearly 40 slides, could’ve been cut down to spare members basic information, such as organizational charts.

Kniech also took aim at the city’s messaging earlier this week, when officials held a press conference to talk about the rise in violent crime and the drive-by shooting that injured nine people, including a toddler and five kids. Public safety psychologist John Nicoletti, who contracts with DPD, attempted to explain to reporters what's behind the bloodshed, saying the city in the midst of a “perfect storm caused by a number of triggering events,” including the pandemic and heightened “racial tension.”

Kniech said characterizing the spike in crime this way is problematic without research.

“I was concerned to see our police psychologist, frankly, explaining to the media a theory of what is causing crime without any citation of research,” she told Pazen. “I agree that all the things being discussed are correlated, but I guess I would ask, what scientific research do you have that protests are causing crime? I think that's a very alarming assumption.”

“What I have said publicly, repeatedly, is that the year 2020 needs to be studied," he said. Further, he added, Nicoletti’s theory is supported by the three-year baseline of shootings and the “direct increase starting in the month of April that continues to trend upward against our three-year baseline."

Before the meeting ended, Councilwoman At Large Debbie Ortega reminded council members of the power they hold as 2021 budget meetings gear up next month.

“It’s our budget process,” she said. “The administration has to present their budget to us, but we control the process and the timing, and so if we need to have more time to have more robust conversations, I suggest we do that.”

Denver has seen a 50% increase in shootings and killings this year compared to last year, an…

“This is not just a law enforcement issue. It is more of a community issue.”

Editor's note: This story has been updated to correct the total budget amounts for the Denver sheriff and fire departments.

Denver Mayor Michael B. Hancock and other officials spoke out Sunday afternoon condemning the "violence, vandalism and destruction" that continued to rock the capital city Saturday night.

The Denver City Council continued to hear from public advocates urging the city to cut police spending by half before their regular meeting Monday night.