Democratic U.S. Senate candidate Michelle Ferrigno Warren is headed back to court to defend her place on Colorado's primary ballot.

Warren won the first round last week in Denver District Court, where Judge Christopher J. Baumann ruled that she "substantially complied" with signature requirements, considering difficulties her campaign encountered as the coronavirus pandemic unfolded across the state.

The ruling added Warren to a primary ballot that already included former Gov. John Hickenlooper, who qualified by petition, and former state House Speaker Andrew Romanoff, who was the sole candidate to emerge from the caucus and assembly process.

The winner of the June 30 primary will face Republican U.S. Sen. Cory Gardner, who is seeking a second term in an election that could determine which party controls the U.S. Senate.

Griswold appealed Baumann's ruling late Friday night, arguing that it would be unfair to candidates who collected enough signatures if Warren remains on the ballot because she fell too far short of the legal requirements — particularly by turning in an underwhelming number of signatures from some congressional districts.

Statewide candidates can qualify for the ballot two ways: by turning in 10,500 valid signatures — including 1,500 from each of the state's seven congressional districts — or by securing the support of at least 30% of delegates to a political party's state assembly. 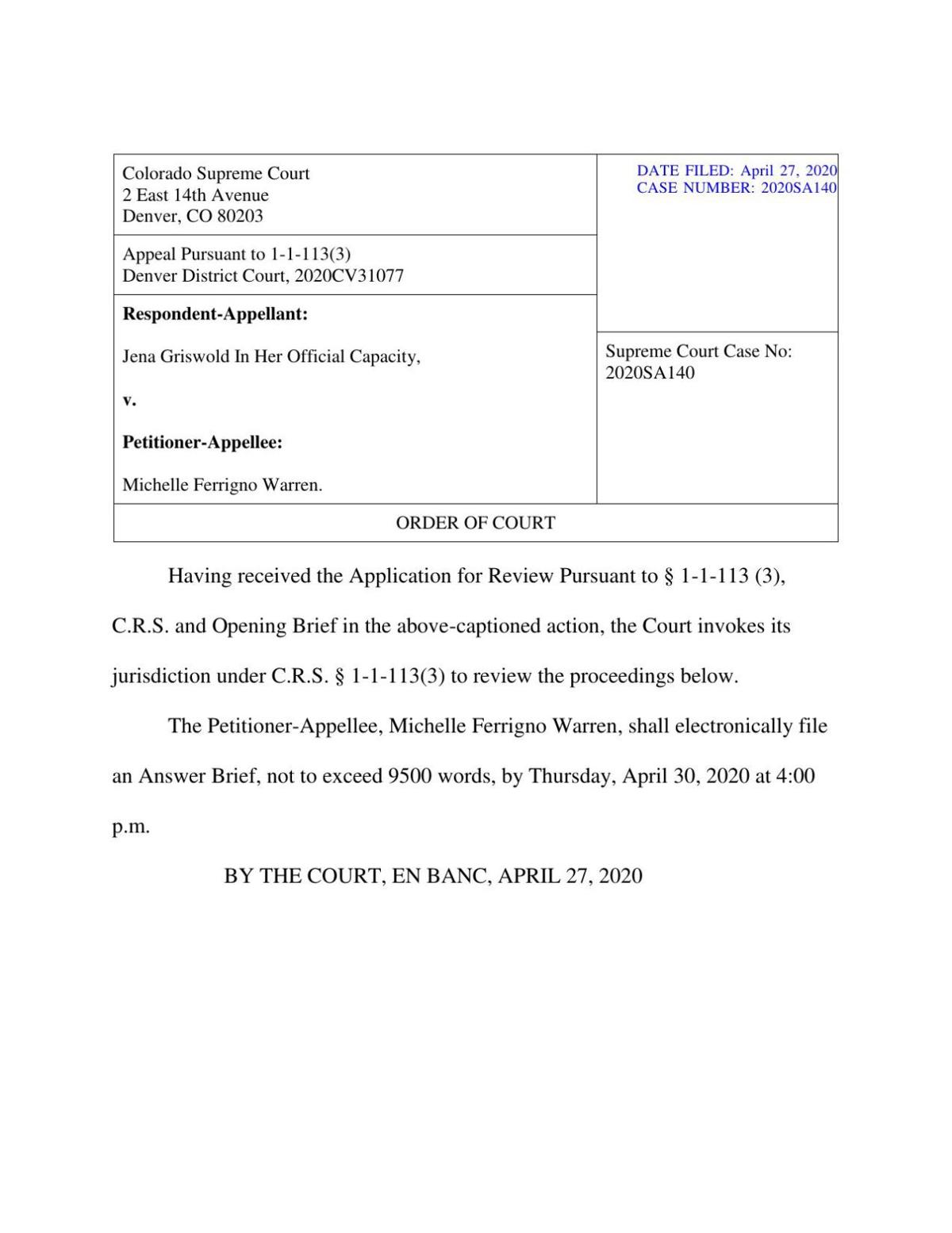 In its en banc order agreeing to review the decision, the high court ordered Warren's attorneys to file an answer to Griswold's appeal by 4 p.m. Thursday.

“A global pandemic cannot stop the most fundamental workings of our democracy — fair and free elections," Warren said in a statement. She added that she looks forward to bringing her case to the supreme court "to ensure that our election process has the highest integrity and accounts for the unforeseen barriers that COVID-19 had on the signature gathering process.”

"We believe the Colorado Supreme Court will impartially review the real world difficulties that candidates faced in meeting the statutory requirements and uphold the District Court’s threshold of 50% as a fair and just standard in light of the COVID-19 pandemic, and in line with similar decisions around the country.”

In his ruling, Baumann determined that the 5,383 valid signatures collected by Warren — just over half the required statewide total — established "significant public support," while Griswold argues that Warren's scant numbers in several congressional districts demonstrate she lacked necessary support across the state.

A spokeswoman for Griswold told Colorado Politics that the Secretary of State’s Office was happy the court would be reviewing the case.

"Our democratic processes must remain accessible and fair during this health crisis. We hope that the Supreme Court issues a uniform standard for candidate petitioning that can be applied in all similar cases to ensure fairness across the board," said Betsy Hart, the secretary's communications director, in a statement.

Warren argued that she was prevented from completing her petition drive in early March as the coronavirus pandemic swept into the state, leading to restrictions on public gatherings and more cautious voters. On top of that, she noted, a week before the March 17 deadline to turn in petitions, Gov. Jared Polis declared a state of emergency.

Wrote Baumann: "In the best of times, engaging strangers in public, holding their attention, and acquiring their signatures on a petition is challenging. In a climate of social distancing to mitigate the spread of a communicable disease, it is even more so. During a declared state of emergency, it becomes almost futile."

With 9,428 signatures determined to be valid, Garcia filed her court challenge to the secretary of state's insufficiency ruling on Friday.

Bray, who had 2,724 signatures ruled valid by the Secretary of State's Office, argued her case before Baumann on Friday, with a ruling expected within days.

Romanoff told Colorado Politics that he believes it would be unfair to penalize candidates whose petition drives were impeded by the advent of the pandemic.

"It sounds like both sides in this case agree — the only question is what the threshold should be," he said in a text message. "I’m ready, willing, and eager to debate anyone who meets it."

Hickenlooper's press secretary sounded a similar note in a statement to Colorado Politics.

"John agrees it should be easier for candidates to get on the ballot and trusts the courts will resolve this in a fair and reasonable fashion," said Ammar Moussa.

Griswold has until May 7 to certify the primary ballot to county clerks, and they can start putting ballots in the mail to most state voters on June 9.