Information for this article was provided by the Center for Public Integrity, a nonprofit investigative news organization based in Washington, D.C.

According to the White House's Coronavirus Task Force, Colorado is among five more states added to the "red zone" this week, which means 100 cases or more per 100,000 population. Colorado, the task force said, is now at 115 cases per 100,000.

The White House now has 31 states on that red zone list, according to the Center for Public Integrity, which has obtained the White House's weekly coronavirus briefings sent to the nation's governors. The White House does not provide these reports publicly, the Center's report said.

The Center's report cited comments from the House Select Subcommittee on the Coronavirus Tuesday, which "slammed the Trump administration for continuing to downplay the spread of the virus even as the task force reports revealed a more dire picture, citing documents Public Integrity obtained and published."

Democratic Rep. James E. Clyburn of South Carolina, who chairs the committees, told the Center that “President Trump’s contempt for science and refusal to lead during this crisis have allowed the coronavirus to surge across the United States. These reports—which the White House sent privately to governors but withheld from the public—show that President Trump’s false rhetoric on testing and masks is hindering our nation’s response.”

The White House report for Colorado said the state is in the "yellow zone" for a positivity rate of between 5% and 7.9%, the 32nd highest rate in the country. Gov. Jared Polis has frequently stated that the goal is to be below 5%, a recommendation that comes from the World Health Organization.

Cases of COVID-19 appear to be rising in Front Range urban centers but have also extended west of those communities, the White House report said. Fremont County, home to the largest contingent of inmates in the state's prison system, was cited as having the largest increase in cases in the past week. The Colorado Department of Public Health and Environment reported an outbreak Oct. 12th at the Fremont Correctional Facility with 352 COVID-19 cases among inmates and another 26 among the staff. It's the second outbreak tied to the Fremont County prison; an outbreak in August was tied to six cases among inmates and four for staff.

CDPHE reported Wednesday 70 new outbreaks of COVID-19 between Oct. 15 and Oct. 21 and 227 total outbreaks for October. Those outbreaks are tied to 2,465 positive or presumed positive cases of COVID-19 and four deaths.

There are now 346 active outbreaks in Colorado and a total of 1,011 total since the pandemic began in March.

The White House said 46.2% of the new cases reported in Colorado in the past week were in Adams, Arapahoe and Denver counties.

The task force, noting the situation in Colorado as critical, said Colorado's ability "to further limit cases and avoid increases in hospitalizations and deaths will depend on increased observation of social distancing mitigation measures by the community until cases decline. The Governor's guidance on these measures is commended," the task force report said.

The task force recommended that state and local leaders work with communities "to ensure a clear and shared message" around wearing masks, physical distancing, and to avoid gatherings in both public and private spaces, especially indoors. "Lack of compliance with these measures will lead to preventable deaths."

In red and orange counties, both public and private gatherings should be as small as possible, and "optimally, not extend beyond immediate family." Lake and Yuma counties are identified as orange in the task force report, indicating a case count of between 51 and 100 per 100,000 and a positivity rate of between 8% and 10%. There are no red counties listed in the report. Ten are listed in the yellow zone: Adams, Arapahoe, Denver, Fremont, Grand, Logan, Montrose, Morgan, Summit and Weld. Yellow is an indicator of a case count of between 10 and 50 per 100,000. The positivity rate for yellow counties is 5% to 7.9%. 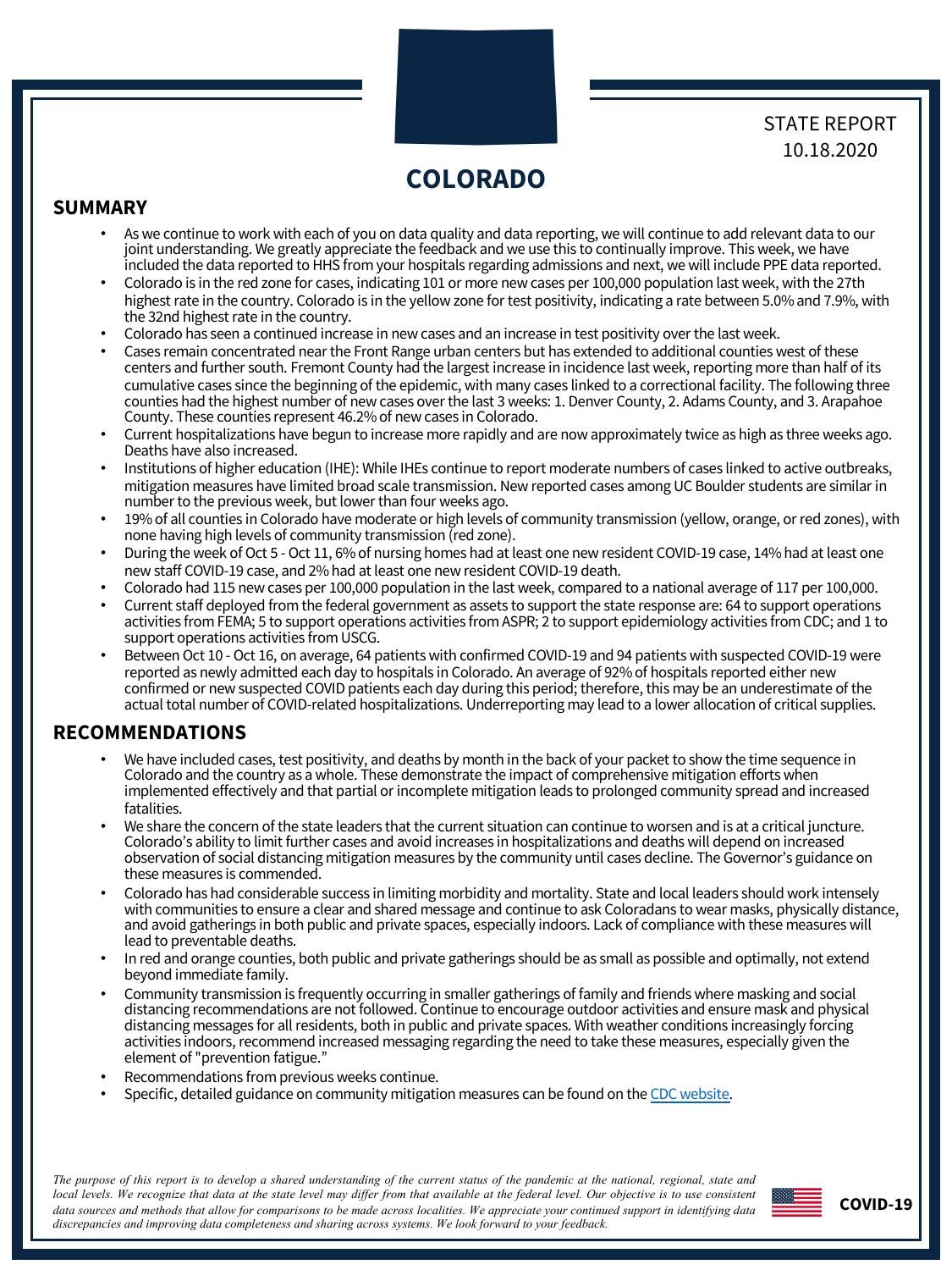 Rising hospitalizations due to COVID-19 have prompted the Colorado Department of Public Health and Environment to order limitations on gatherings in all counties at the "Safer at Home" status.