Six briefs have been filed in the Colorado Supreme Court to argue whether the General Assembly's 120-day calendar is a consecutive one or whether the legislature can pause the session for a public health emergency.

At issue: when the General Assembly adopted a resolution putting them into recess from March 14 to March 30, whether the lawmakers lost those 16 days from the 120-day calendar.

Joint Rule 44(g), adopted in 2009, says that in a public health emergency, lawmakers can pause the session. But questions about the constitutionality of the pause surfaced even before they voted to adjourn, from Republican lawmakers who claimed a defined beginning and end is what's in the Colorado Constitution. Meaning, the General Assembly began its 120-day session on Jan. 6 and will adjourn on May 6, and cannot continue to work past that date.

The difference matters. If the General Assembly were to come back on March 30 and continue as if they hadn't missed a day — leaving 53 days in the calendar — they could continue to meet until around May 20. But any bill passed after May 6 could be challenged on constitutional grounds. Given the high-profile measures that still await legislative action, such as paid family leave, the public option bill, immunizations and the budget, that's a risk lawmakers don't want to take. So they asked the Supreme Court to weigh in on March 14.

A brief filed on behalf of all 40 Republican lawmakers from the General Assembly was submitted Tuesday by former U.S. Attorney Troy Eid, a former cabinet official in the Owens administration.

In that brief, Eid argues that the plain language of the state Constitution, as amended by voters in 1988, says the regular legislative session is 120 consecutive days. He also claims Joint Rule 44(g) which lawmakers adopted in 2009 as a way of dealing with a public health crisis, is unconstitutional because it attempts to amend the Constitution. He also maintains that there are already alternative ways to deal with an emergency, such as a special session called by the governor or the General Assembly.

Eid points to the history of Senate Concurrent Resolution 1, which put the 1988 question on the ballot, which attests to a "shared understanding" that "calendar days" is the same as consecutive days. Even the opponents of Amendment 3, the 1988 ballot measure, understood calendar days meant consecutive days, Eid wrote, a "cap on how long the General Assembly would meet with a defined beginning and end."

Eid cited a Colorado Springs Gazette editorial on Nov. 5, 1988, that said "at the very least, if you believe the adage that one's life, liberty or property are safe when the Legislatures is in session, then Amendment 3 would keep us safe for two-thirds of the year."

Walsh also wrote that a special session is "no substitute for a full, regular session," noting that special sessions contain a limited scope and might raise separation of powers issues.

The brief submitted by Attorney General Phil Weiser, on behalf of Gov. Jared Polis notes that the Constitution is "ambiguous" on the issue of whether the 120 days are consecutive. It doesn't say how to count them, Weiser wrote.

"The provision also does not suggest that voters intended the General Assembly be deprived of the full 120 calendar days in which it may legislate when circumstances beyond its control prevent it from meeting during its regular session," the brief states.

The General Assembly adopted rules to clarify that constitutional language, Weiser wrote, requiring them to meet on 120 consecutive days, with one exception: a public health emergency. In that case, and as dictated by Joint Rule 44(g), the General Assembly only counts "working calendar days" during that emergency.

That narrow exception is "consistent with voters' intent that the General Assembly be a part-time citizen legislature" and with flexibility to fulfill its obligations when the state is in a public health crisis.

A brief from the Colorado Association of Public Health Officials argued the public health angle. In that brief, attorney Matthew Fritz-Mauer of Kelman Buescher points out the Constitution is ambiguous on the issue of consecutive days. Joint Rule 44 is constitutional, the brief states, and that the General Assembly must be able to meet intermittently in order to effectively address the pandemic. Unless the legislature is able to "dynamically respond to this rapidly-changing crisis, it will not be able to protect Coloradans and carry out the key purpose of the state Constitution." If the General Assembly is unable to meet and act intermittently, "that will itself create a public health crisis."

The Independence Institute also submitted a brief, written by David Kopel. He wrote that legislature routinely abuses its authority under the state constitution, citing, for example, its use of the safety clause, which in legislation is intended to preserve the public peace, health or safety. Kopel wrote that the safety clause has been misused "to diminish the People's right of referendum."

Allowing the General Assembly to extend its own session is "dangerously tempting," Kopel wrote. The "Calendar Days Clause" results in a date certain for the adjournment of the session, and is indispensable for the preservation of a citizen legislature, the brief explains. And when Article V (the section of the Constitution that sets the 120-day calendar) has exceptions, it says so.

Finally, a coalition of county and city governments, the metro mayors caucus, the 6th Judicial District Attorney's office, the Denver District Attorney and left-leaning organizations, including the ACLU, the Bell Policy Center, Good Business Colorado and Democrats for Education Reform, also submitted a brief, authored by attorney David Seligman of Towards Justice. Joint Rule 44 is consistent with the plain language of the Constitution, Seligman wrote. Nothing in the constitution prohibits the General Assembly from enacting rules, like Joint Rule 44, that allows it to meet in a regular session for up to 120 non-consecutive workdays in a public health emergency. The Constitution sets the first day of the session — no later than the second Wednesday of January of each year — and that the session is no more than 120 calendar days. But nothing in the Constitution prohibits the General Assembly from establishing rules that allow it to adjourn in case of an emergency, and resuming when it is safe to do so.

A date for oral arguments on the briefs has not yet been set. 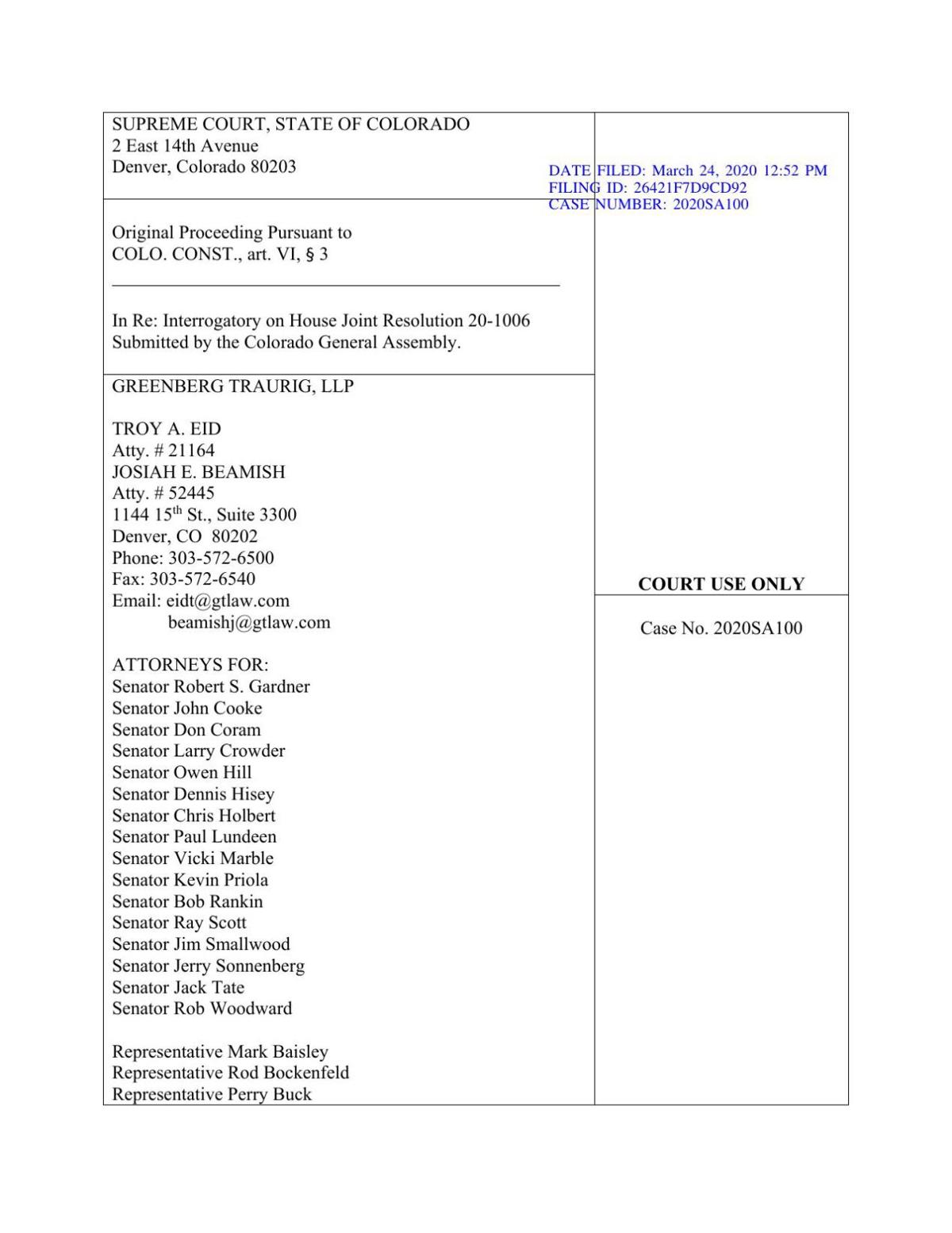 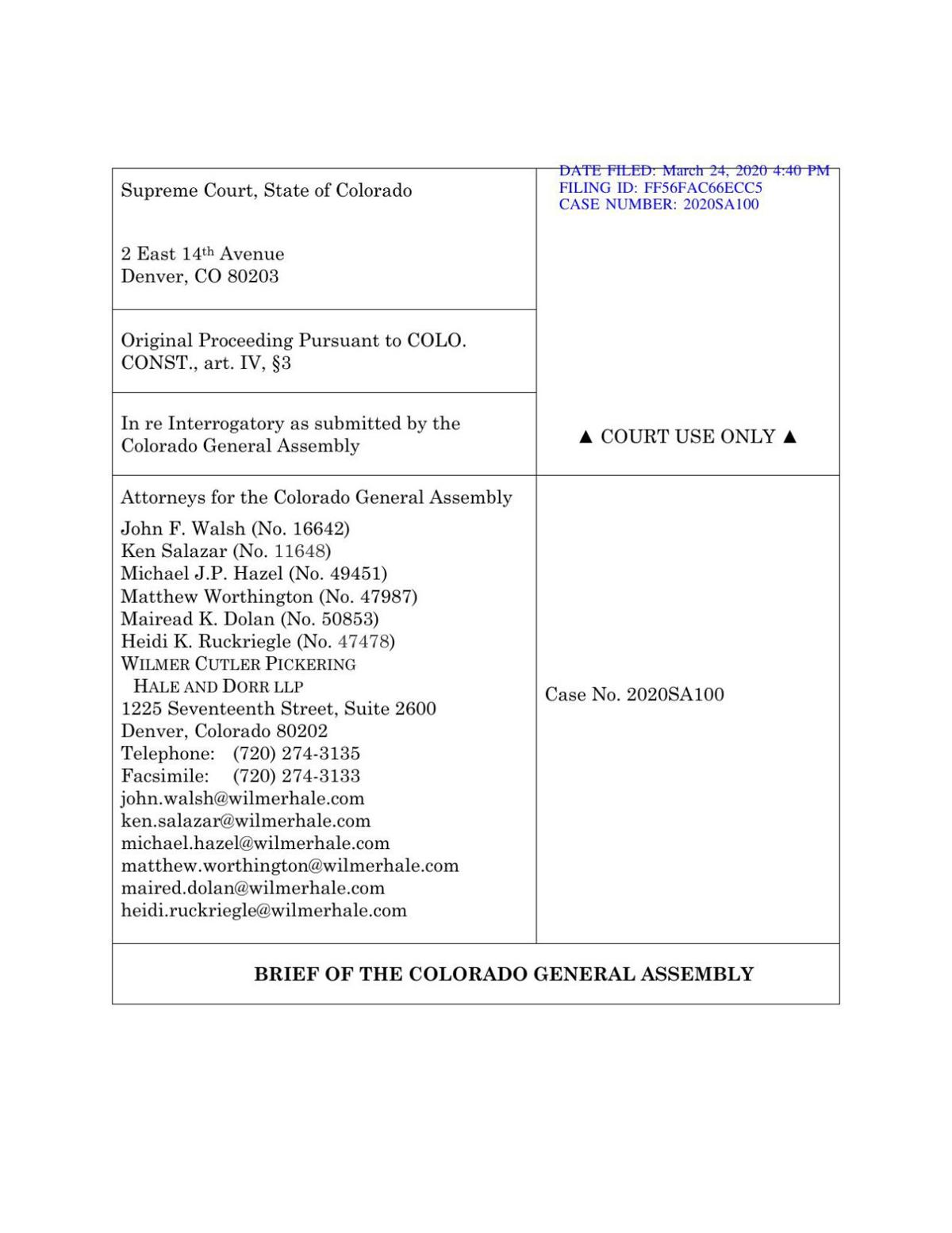 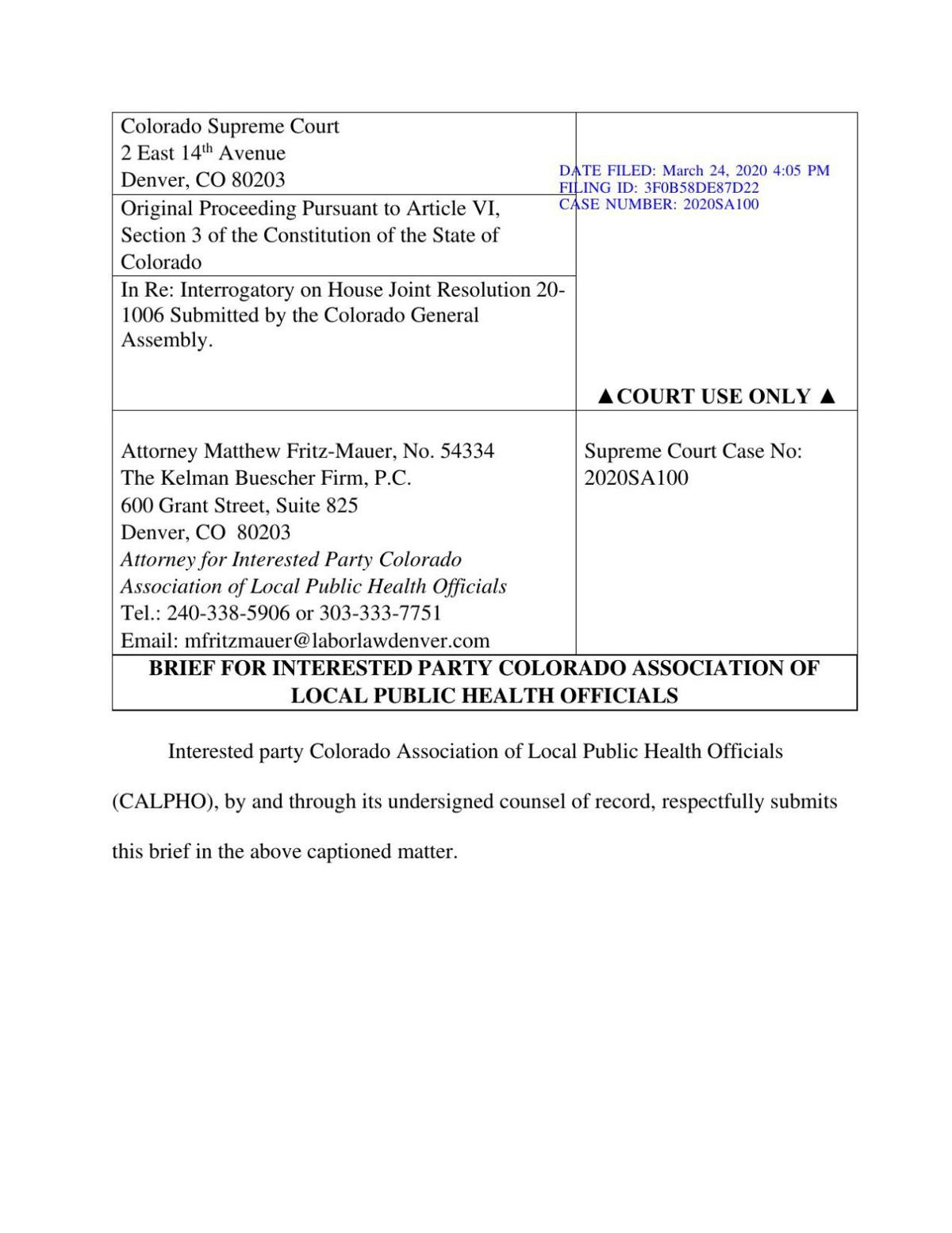 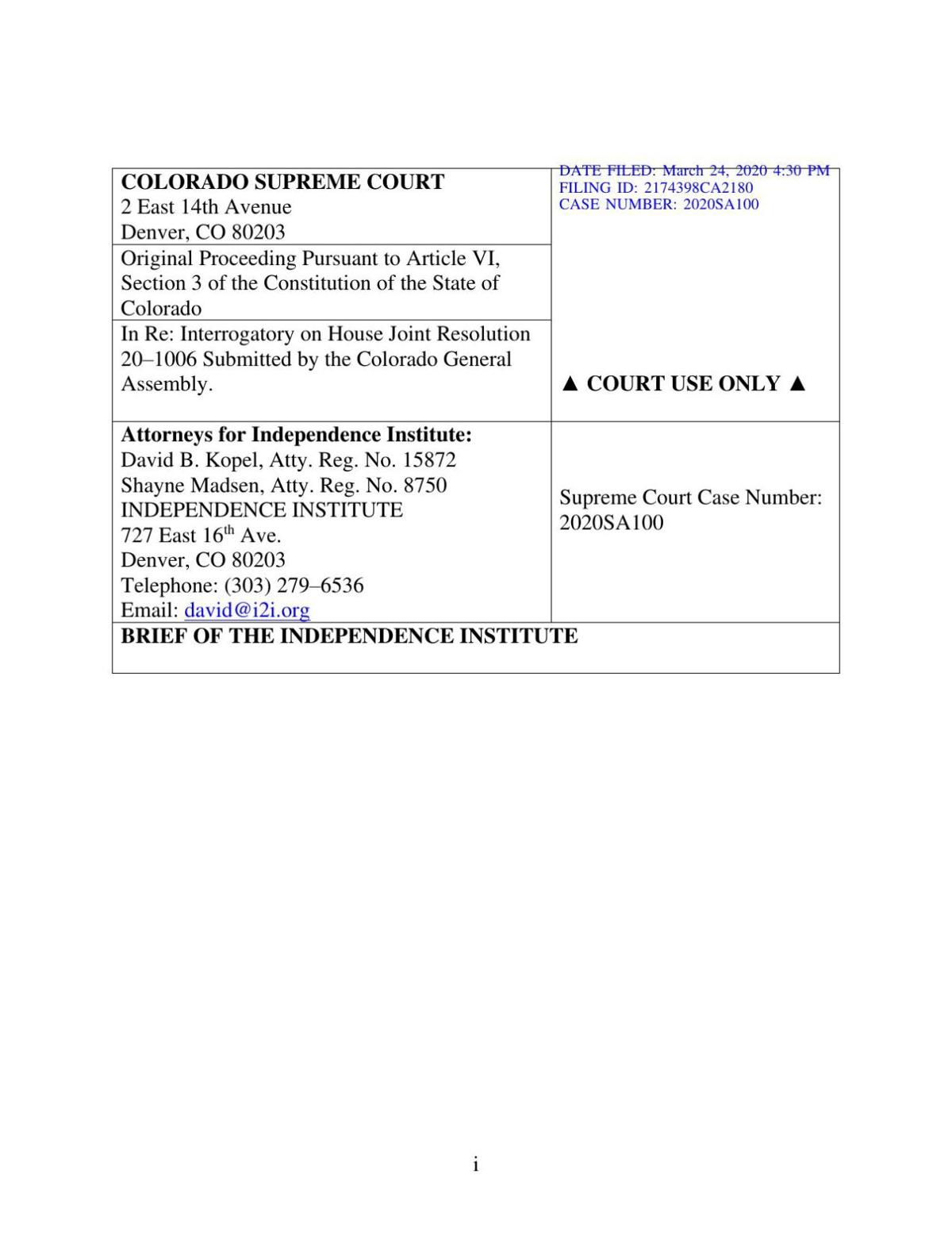 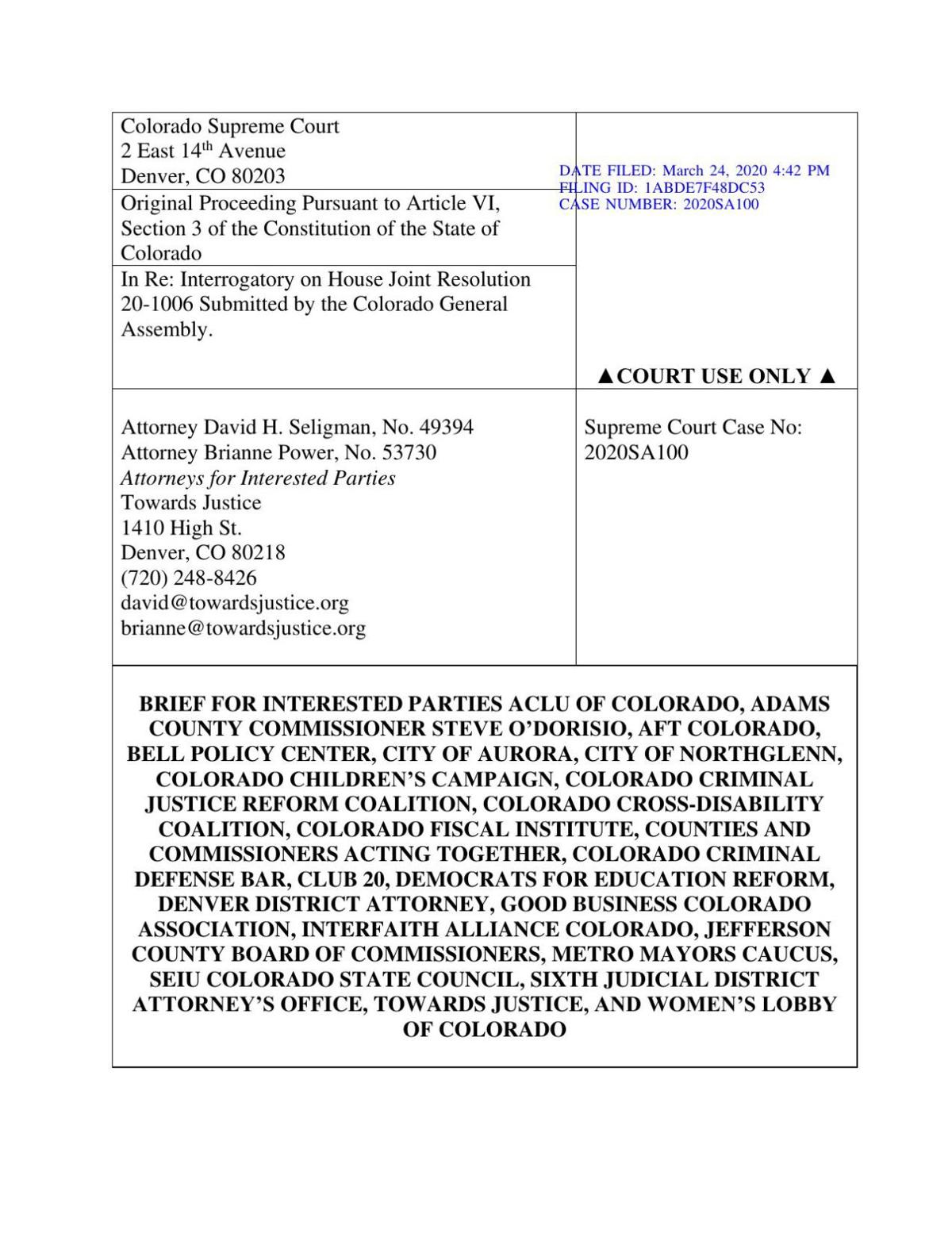 At issue: whether the 120 days must be consecutive or, if under a legislative rule, whether the assembly can take a time out without losing any working days.