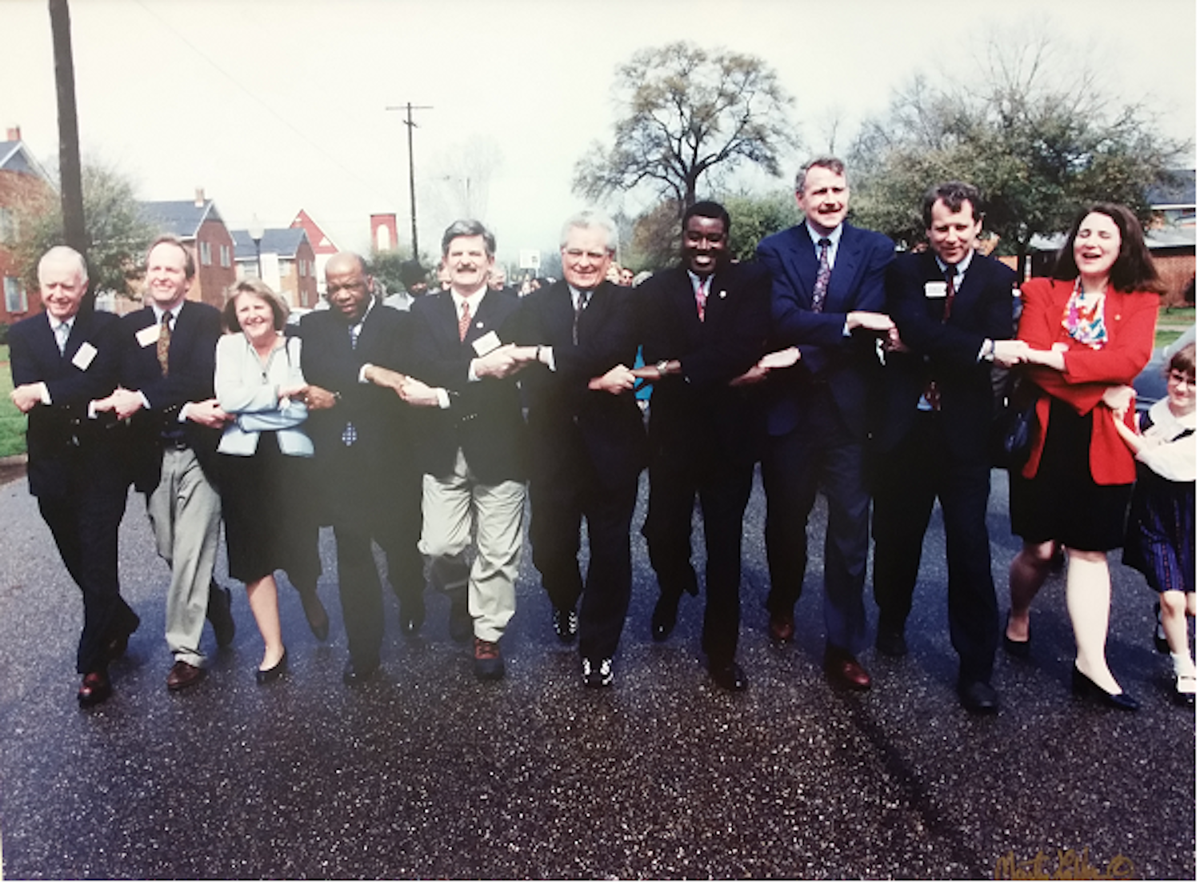 U.S. Rep. Diana DeGette, D-Denver, right, links arms with her daughter, Raphaela, and fellow members of Congress, including U.S. Rep. John Lewis, D-Georgia, fourth from left, then-colorado Gov. Roy Romer and Jim Nicholson, then-chairman of the Republican National Committee, to reenact the crossing of the Edmund Pettus Bridge during the 33rd annual commemoration of Bloody Sunday on March 8, 1998, in Selma, Ala. 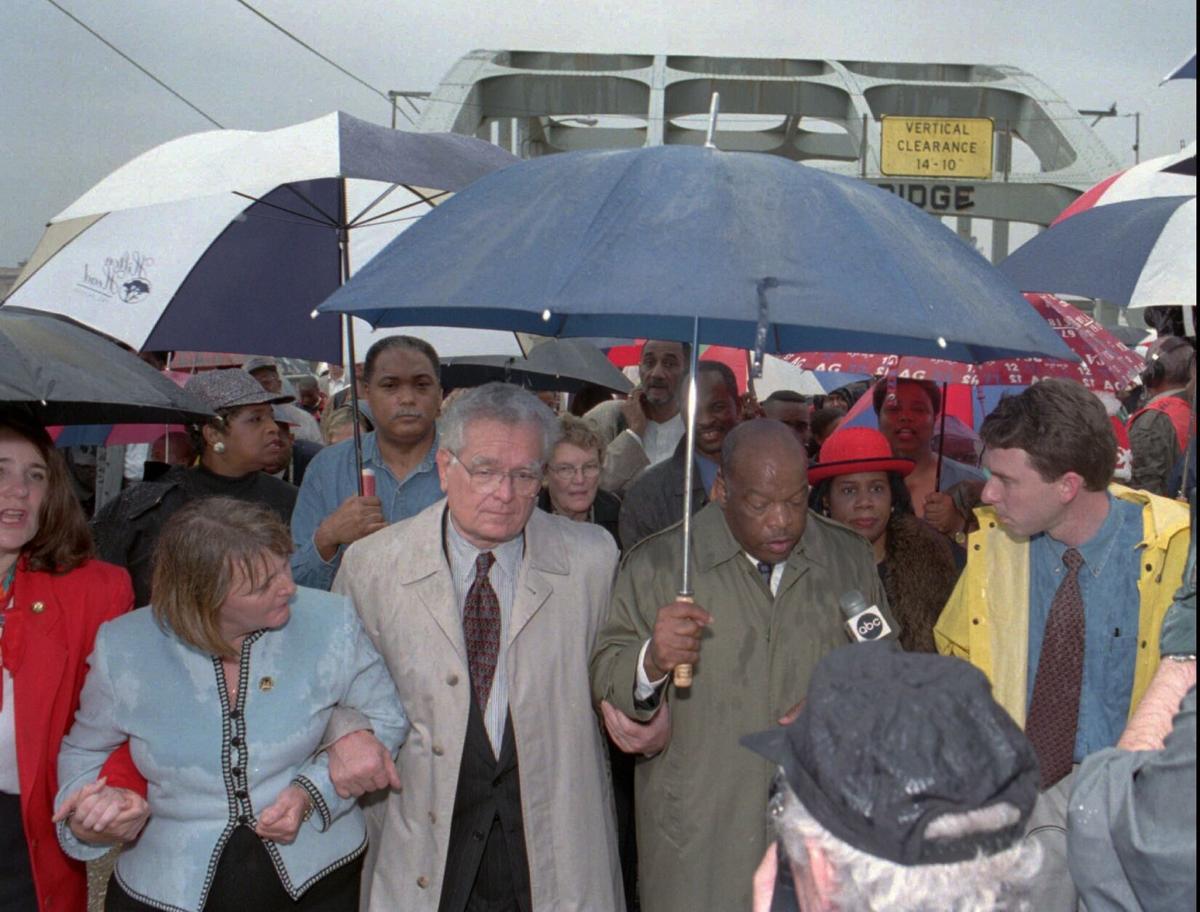 U.S. Rep. Diana DeGette, D-Denver, right, links arms with her daughter, Raphaela, and fellow members of Congress, including U.S. Rep. John Lewis, D-Georgia, fourth from left, then-colorado Gov. Roy Romer and Jim Nicholson, then-chairman of the Republican National Committee, to reenact the crossing of the Edmund Pettus Bridge during the 33rd annual commemoration of Bloody Sunday on March 8, 1998, in Selma, Ala.

A week ago, marking one year since the day civil rights icon John Lewis died at age 80, U.S. Rep. Diana DeGette, a friend and longtime colleague of the Georgia congressman, shared a memory on social media.

"His legacy of standing up and fighting for what he truly believed in will never be forgotten," the Denver Democrat wrote. "It’s now up to all of us to carry on the fight for justice that he dedicated his life to leading."

She attached a grainy photo of 10 smiling people with arms linked, walking toward the camera. Taken on a rainy Sunday in 1998, the photo memorialized the group's reenactment of the March 7, 1965, march across the Edmund Pettus Bridge in Selma, Alabama — an event that marked a turning point in the civil rights movement.

Lewis is near the center, with then-U.S. Rep. Karen Thurman, a Florida Democrat, to his left. To Lewis' right are Jim Nicholson, the Coloradan who at the time chaired the Republican National Committee and would later serve as secretary of veterans affairs, and then-Colorado Gov. Roy Romer. Another six members of Congress, including DeGette, march alongside them.

One year ago, today, we lost my good friend John Lewis. His legacy of standing up and fighting for what he truly believed in will never be forgotten. It’s now up to all of us to carry on the fight for justice that he dedicated his life to leading. #GoodTrouble pic.twitter.com/X4tKULkFes

DeGette tagged the post "Good Trouble," the slogan that has been long associated with Lewis, who led the original walk across the bridge on what came to be known as Bloody Sunday. At the outset of a planned march to demand voting rights, from Brown Chapel in Selma to Montgomery, sheriff's deputies and state troopers blocked the civil rights protesters with tear gas, billy clubs and police dogs, leaving one protester dead and 50 injured, including Lewis.

Two weeks later, under the protection of the Alabama National Guard, Dr. Martin Luther King Jr. led hundreds in prayer and then on a march across the same bridge, that time eventually completing the 47-mile trek to Montgomery.

Thirty-three years after that first attempted crossing, Lewis led a small group — including DeGette, Nicholson and Romer — on the first of what would soon turn into annual, bipartisan tours of some of the civil rights movement's key landmarks.

Organized by the Washington, D.C.-based Faith and Politics Institute, the weekend trips include stops in Montgomery, Birmingham and Selma, and have been joined by more than 300 members of Congress, as well as four current and former presidents — Bill Clinton, George W. Bush, Barack Obama and Joe Biden.

On the 50th anniversary of Bloody Sunday, in 2015, Lewis spoke about why he kept returning to the bridge.

"We come to Selma to be renewed," he said. "We come to be inspired. We come to be reminded that we must do the work that justice and equality calls us to do."

Said Lewis: "We can bear witness to the distance we have come and the progress we have made in 50 years. And we must use this moment to recommit ourselves to do all we can to finish the work. There’s still work left to be done."

The crowd, which included then-President Obama and former President Bush, had grown considerably since the initial 1998 pilgrimage DeGette attended.

DeGette recalled that first trip in an email to Colorado Politics.

Lewis, she said, "traced his steps from the 1960s with us — the Montgomery bus station where the Freedom Riders were beaten by racists, the 16th Street Church in Birmingham, and other museums and sites of civil rights marches."

She said she brought her daughter, Raphaela, then 9 years old, on the trip.

"She was the only child on the trip and it had a lasting impact on her life — including a lifelong friendship with John Lewis," DeGette said.

In an essay written shortly after Lewis' death a year ago, DeGette described the singular event that left her stunned, following the group's walk across the iconic bridge, when Lewis announced the group was making "a slight detour so he could visit a sick friend."

The friend, it turned out, was George Wallace, the former four-term segregationist governor of Alabama, who had ordered the troopers to stop the marchers in their tracks on Bloody Sunday.

Wallace, who was paralyzed by a would-be assassin's bullet during his second run for the presidency in 1972, had later renounced his segregationist past and sought forgiveness, soon becoming fast friends with Lewis.

DeGette said Wallace, who was bedridden and would die six months later, greeted Lewis warmly and was avid to meet his congressional colleagues.

"John showed no bitterness or anger at the governor. In fact, there seemed to be a genuine bond between these one-time adversaries. And that’s the reason John Lewis was an extraordinary American," DeGette wrote.

"He saw the good in everyone. He cared about all persons, no matter their age, race, gender, sexual orientation, or political party. And he remained firm in his commitment to justice until the end."

U.S. Rep. Fred Upton, a Michigan Republican, recalled joining his colleagues at the Edmund Pettus Bridge for a portion of the first pilgrimage, in remarks delivered on the House floor a year later, after a larger group of nearly 20 lawmakers had just completed the second edition of the civil rights journey.

Nodding to Lewis, Upton continued: "Yet there is work that we have to do. As Republicans and Democrats, as members in this chamber and the other and across the country, we have to make sure that there is no room in our hearts for hatred, for bigotry or racism. It is your footsteps and it is your leadership and it is your grace that allowed us to see the path that you took that helps give us the conviction and the courage and the perseverance to continue that path."

After Upton spoke, Lewis said he had run into King's widow, Coretta Scott King, the previous Sunday at church, and she had told him how moved she had been to see the members of Congress show up in Selma to remember Bloody Sunday.

"I think that is why we have to go back," Lewis said, noting that had received an invitation from then-U.S. Rep. Earl Hilliard, the Alabama Democrat who represented the district that included Selma, to return the next year to commemorate the 35th anniversary of the march.

"Because I think in this process, we help America to become a circle of brothers and sisters, what I like to call, really ... a circle of trust," Lewis said. "We build a sense of community. We move toward that period and that place of laying down the burden of race. I think as we move into the next century, we have to be the leaders, saying that as a nation and as a people, we must lay down the burden of race. It is too heavy a burden for us to bear."

TRAIL MIX | In Colorado, count on fields swelling for open US House seats

Ernest Luning: "Depending where the final lines fall, both the Democratic and Republican primaries could be crowded with hopefuls eyeing that rarest of Colorado political prizes: an open congressional seat."