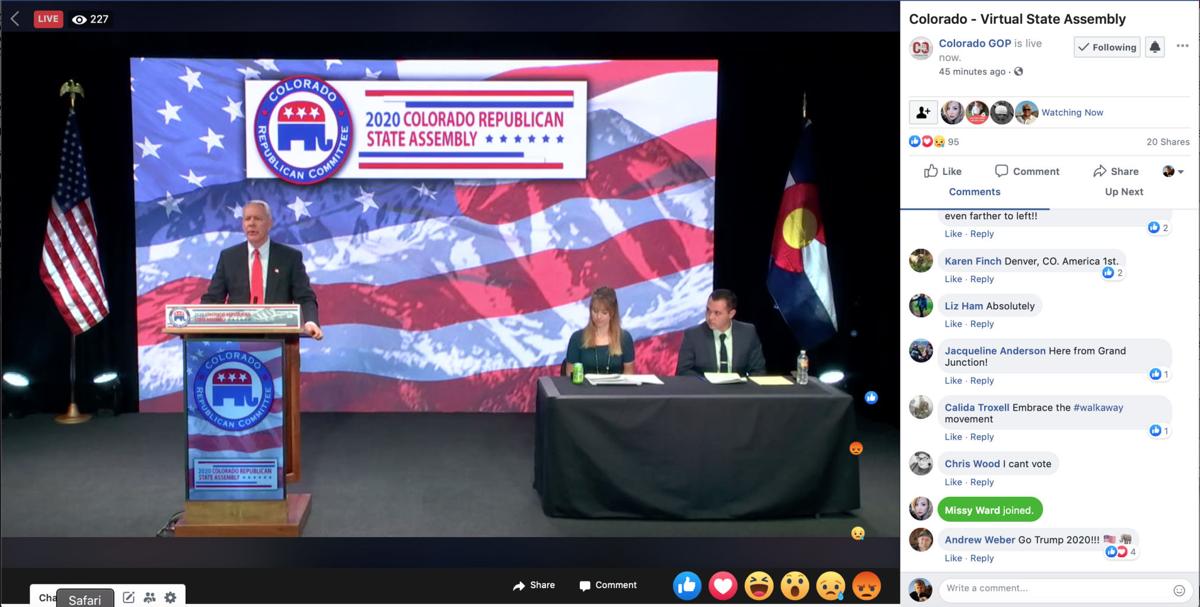 U.S. Rep. Ken Buck, the chairman of the Colorado Republican Party, left, addresses the party's virtual state assembly on Saturday, April 18, 2020, as state GOP officers Kristi Burton Brown, the vice chair, and Devin Camacho, secretary, look on. The assembly was held online due to restrictions on public gatherings to prevent the spread of the new coronavirus. 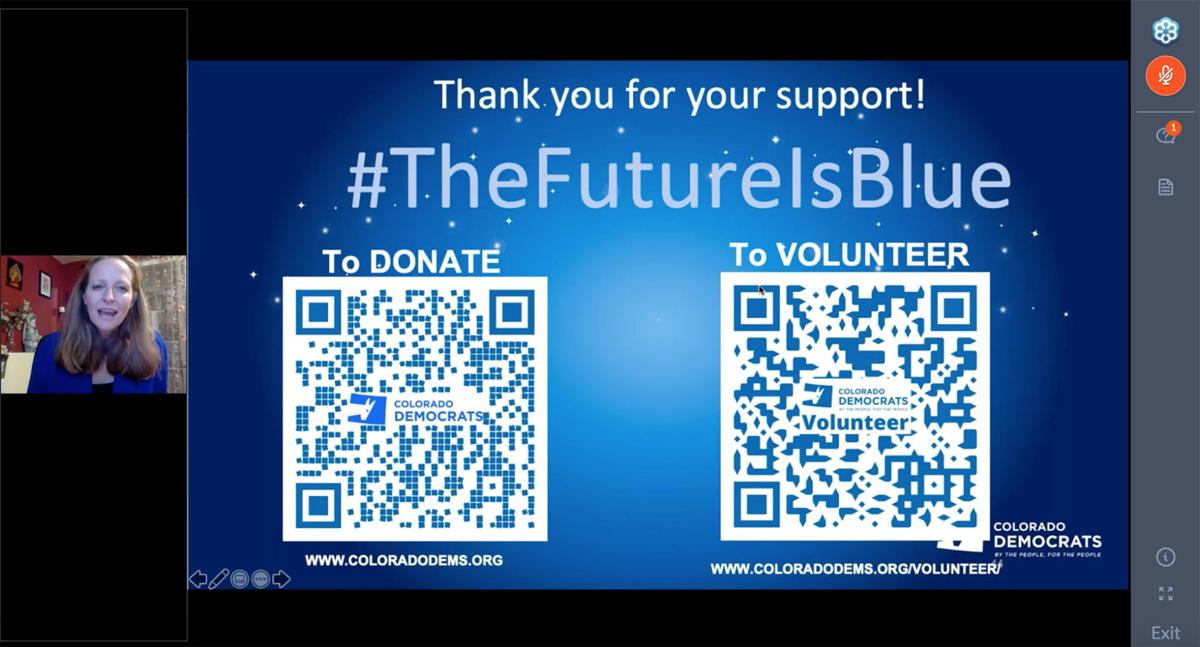 U.S. Rep. Ken Buck, the chairman of the Colorado Republican Party, left, addresses the party's virtual state assembly on Saturday, April 18, 2020, as state GOP officers Kristi Burton Brown, the vice chair, and Devin Camacho, secretary, look on. The assembly was held online due to restrictions on public gatherings to prevent the spread of the new coronavirus.

If it’s turning from winter to springtime in an odd-numbered year, it must be time for the most active members of Colorado’s two major political parties to pick party officers and point the Democrats and Republicans toward the next election.

As has become customary in recent cycles, the Democrats are sticking with the ones that brung ’em, poised this year to return the entire slate of officers who ran things for the 2020 election, when the party cemented historic wins achieved in 2018 by taking firm control of state government and winning seats up and down the ballot that hadn’t been held by Democrats in a generation if ever.

And in a situation that has also become familiar, state Republicans are preparing to start fresh with a new lineup, choosing between establishment and grassroots candidates in an attempt to recapture the hold the GOP once had despite an increasingly left-leaning state.

The difference couldn't be more plain.

Carroll, who won her second term unopposed two years ago, follows former congressional nominee Pat Waak, who chaired the state Democrats from 2005 to 2011, and Rick Palacio, a former legislative and congressional aide, elected in 2011, 2013 and 2015.

Underlining the Colorado Democrats’ demonstration of the adage that if it ain’t broke, don’t fix it, every incumbent state officer is running for another term without opposition.

Across the aisle, state Republicans are engaged in what appears to have developed into an eternal battle for stewardship of the party, ready to elect their seventh chair in the nine-cycle stretch since 2005, when the Democrats began their consecutive run of three-term chairs.

The state GOP has had new leadership every two years since 2015, when Republicans denied two-term chair Ryan Call another go at it, marking the first time in state history a GOP chair lost a bid for re-election.

Call was unseated by Steve House, a former gubernatorial candidate and county chair. At the next state reorganization in 2017, after House declined to seek a second term, former county chair Jeff Hayes won the post, and then in 2019, when Hayes hung up his spurs after a single term, the Republicans elected U.S. Rep. Ken Buck, who split his duties between Congress and heading the party.

By all accounts, the party election, set to be decided March 27 at a hybrid virtual and in-person meeting of the state GOP central committee, has come down to a close race between Gessler and Burton Brown, echoing the contests pitting a more establishment choice vs. the more grassroots candidate, respectively.

Keeping in mind that the distinctions sometimes blur — insisting his roots are in the tea party, Gessler disdains the establishment label — in all but one of five most recent party elections, the establishment contender won.

In 2011, Call prevailed over former state Sen. Ted Harvey and in 2013 when Call fended off a challenge from Mark Baisley, who has since won election to the state House of Representatives. Call lost to House, who had grassroots backing, in 2015, and in 2017 Hayes was elected over former congressional nominee George Athanasopoulos.

Buck, who rose to prominence a decade ago when he won the U.S. Senate nomination on the strength of tea party backing, was seen as the establishment candidate two years ago when he won narrowly over then-state Rep. Susan Beckman.

Dick Wadhams, who preceded Call chairing the state GOP for two terms from 2007 to 2011, overlapping with Waak's tenure chairing the Democrats, was the last Republican to run unopposed for Colorado state chair. The veteran campaign manager and political consultant was also the first Republican in decades to treat the state chair position as a full-time job, an arrangement that has since become routine, Buck's moonlighting notwithstanding.

"The model," he told Colorado Politics, "was a successful, wealthy business leader who would spend a lot of time raising money but would hire a strong executive director."

The exception occurred just once, in 1965 following the LBJ landslide, when Colorado Republican losses were nearly as pronounced as they have been in the last two cycles.

In the wake of that election, the state's three leading Republicans, Gov. John Love and U.S. Sen. Gordon Allott and Peter Dominick, decided the State GOP needed to be run more professionally so they approached Love staffer Howard Propst and persuaded him to run the party full-time for a couple of years, Wadhams recalled.

It was a similar proposition that lured Wadhams to the job after state Democrats romped at the polls for the second cycle running in 2006.

Legislators Andy McElhaney and Mike May, the state Senate and House minority leaders, respectively, said Bob Martinez, the incumbent chair, wasn't seeking another term and urged Wadhams to consider taking the helm because of his campaign experience.

Wadhams said he liked the idea but stressed that he wasn't wealthy so wanted the position to be full-time, something the politicians thought was a good idea. He ran unopposed and won a second term in 2009 with only nominal opposition.

After first announcing he would seek a third term in 2011, however, Wadhams withdrew, pointing to widening fissures in the party in the early years of the Obama administration.

In a letter explaining his decision, Wadhams wrote that he had grown “tired of those who are obsessed with seeing conspiracies around every corner and who have terribly misguided notions of what the role of the state party is.” Increasingly stringent ideological litmus tests, he added, could cost the party the votes of the state's swing unaffiliated voters.

Wadhams told Colorado Politics that he was motivated by the political landscape following in the wake of the 2010 election, when the state GOP turned out 106,000 more Republicans than Democrats but tea party nominees Buck and Dan Maes still managed to lose the U.S. Senate and gubernatorial races to Democrats Michael Bennet and John Hickenlooper, respectively.

"By the way," Wadhams said, "I think the tea party infused our party with new blood, brought a sense of fiscal responsibility. But so many of them were obsessed with conspiracy theories. They were more interested in picking intra-party fights than they were in winning elections.

"It’s even worse today. You have the Trump loyalists — today we are obsessed with election fraud and stolen elections."

Noting that many of the leading candidates for state party chair have made the issue central to their bids, Wadhams added, "I know I’m in the minority. The vast majority of Republican activists believe the election was stolen. I know that, but I strongly disagree, and it doesn’t serve our party to keep talking about it."

Wadhams suggested the internal party rifts laid bare in every state GOP chair race since he held the office could be baked in at this point.

"I think we’re going to be having these contests every two years," he said with a sigh.

TRAIL MIX | A compilation of the best columns from Ernest Luning

Ernest Luning writes on politics, from the serious to the humorous, in his weekly column Trail Mix. Here are a few of his best columns from 2020 to today.