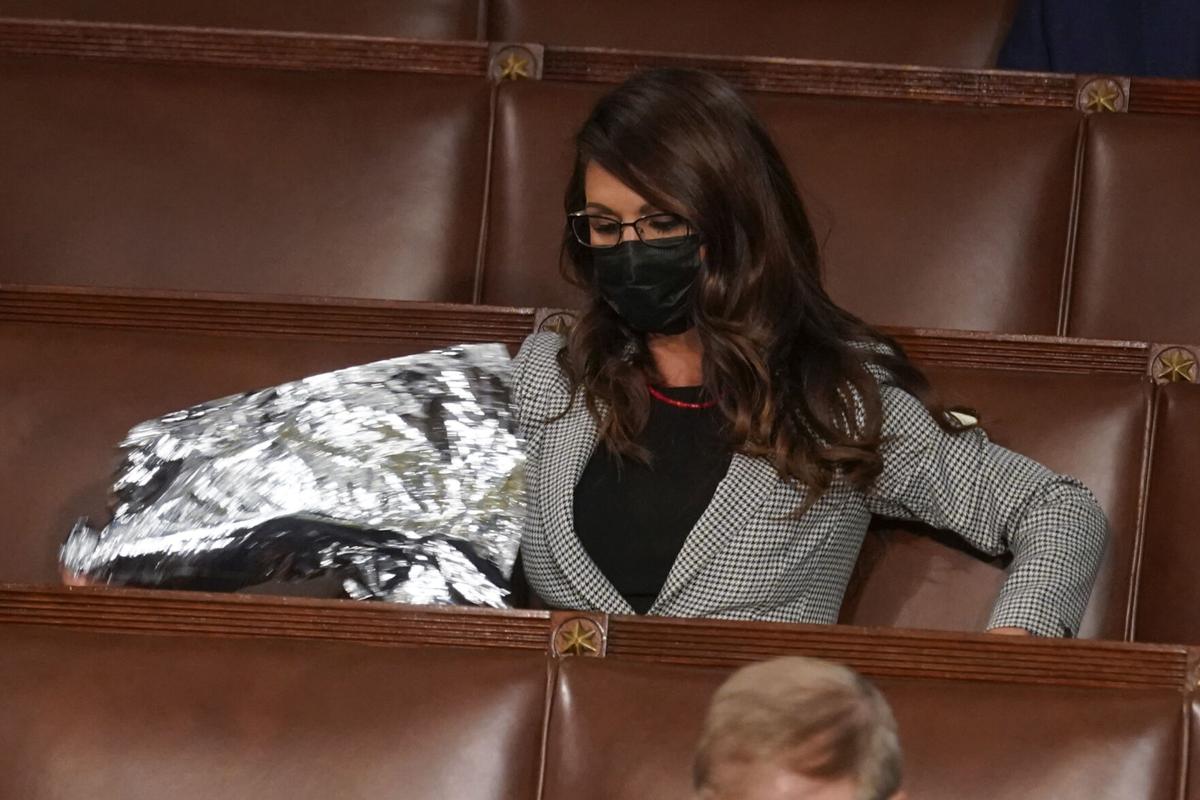 Rep. Lauren Boebert, R-Colo., holds a lightweight blanket as President Joe Biden speaks to a joint session of Congress Wednesday, April 28, 2021, in the House Chamber at the U.S. Capitol in Washington. 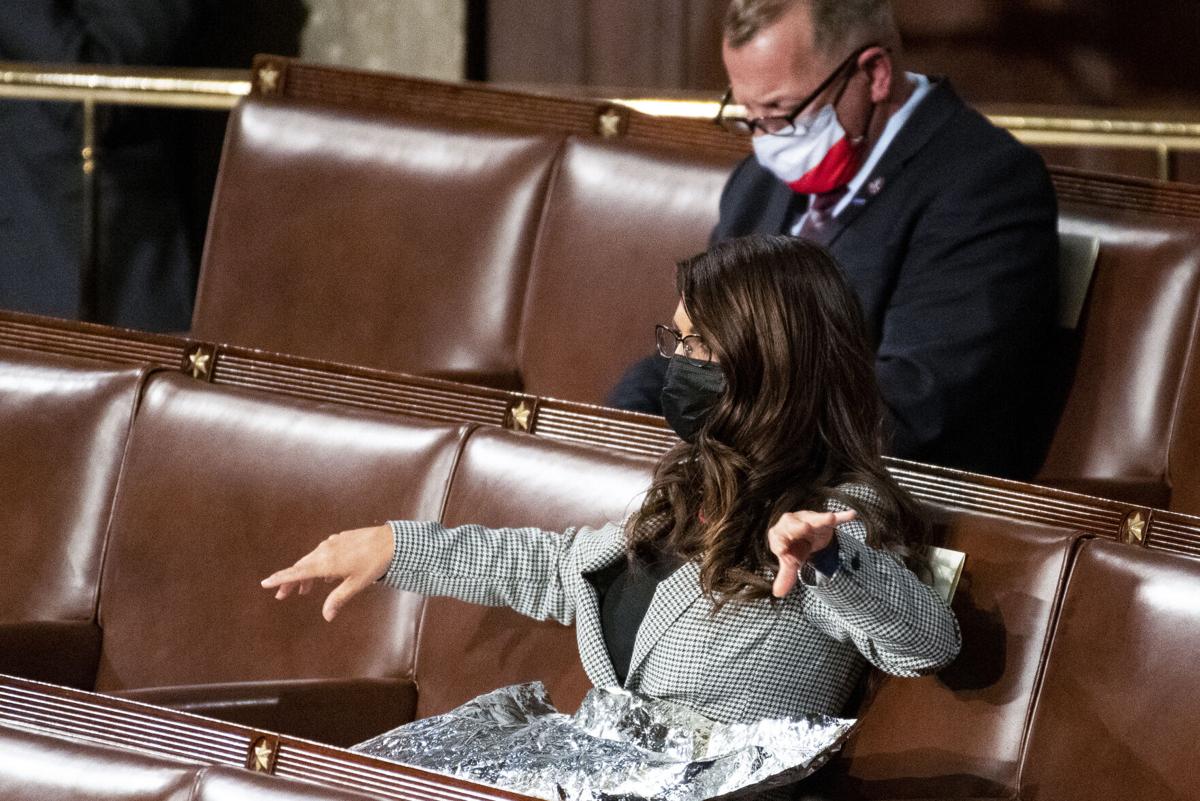 Rep. Lauren Boebert, R-Colo., sits with foil on her lap as she listens as President Joe Biden addresses a joint session of Congress, Wednesday, April 28, 2021, in the House Chamber at the U.S. Capitol in Washington.

Rep. Lauren Boebert, R-Colo., holds a lightweight blanket as President Joe Biden speaks to a joint session of Congress Wednesday, April 28, 2021, in the House Chamber at the U.S. Capitol in Washington.

Rep. Lauren Boebert, R-Colo., sits with foil on her lap as she listens as President Joe Biden addresses a joint session of Congress, Wednesday, April 28, 2021, in the House Chamber at the U.S. Capitol in Washington.

It was the crinkle heard 'round the world — or across the Twitterverse, at least.

About three-fourths of the way through Joe Biden's first address to a joint session of Congress on April 28, Colorado Republican Lauren Boebert, one of 100 lawmakers in attendance, drew attention from the press gallery — and the Secret Service — when she loudly opened a lightweight, Mylar space blanket and dropped it across her knees.

Boebert, who skipped Biden's inauguration to attend former President Donald Trump's early-morning send-off at Joint Base Andrews, was among 20 House Republicans in the sparsely populated House chamber, along with an equal number of House Democrats and 30 senators from each major party, amounting to just a fraction of the usual 1,200-1,600 people crammed into the room for State of the Union addresses or other presidential speeches before Congress.

With so few seated in the chamber, it was easier for any one lawmaker's reaction to Biden's address to catch the attention of the smaller-than-usual number of onlookers on site.

Biden's hourlong speech about his young administration's accomplishments and a raft of ambitious proposals on the eve of his 100th day in office, was said to have been modeled on the delivery of FDR’s fireside chats.

The same way FDR harnessed the new medium of radio to calm a worried nation in an attempt to restore confidence in the 1930s, Trump had mastered the still relatively new Twitter platform, firing off tweet after tweet, driving the country into a constant state of anxious fatigue.

Boebert, who last year knocked off a Trump-endorsed GOP incumbent by claiming she was the Trumpier Republican, has become nearly as active on Twitter as her role model. In some ways, when she unfurled the blanket, it was the perfect Twitter moment.

"I honestly don't know what it means," tweeted one Capitol reporter.

CNN's correspondent mused that Boebert might have simply been making herself more comfortable.

"It has gotten a little chilly in the Chamber as the air conditioning kicked on," the reporter tweeted. "Rep. Lauren Boebert of Colorado pulled a foil blanket out of her handbag and used it to cover her legs while she watches the speech."

Bloomberg reporter Jennifer Jacobs, however, figured it out: "GOP Rep Lauren Boebert took out foil blanket like ones used (in) detention facilities and shook it when Biden mentioned humanitarian crisis."

Before long, Boebert had tweeted an explanation, and a couple of intrepid Capitol Hill reporters got confirmation from her staff that she had draped herself in the silver blanket to draw attention to the children who have been among a record number of migrants crossing the southern border in recent months.

"For those who complained about the sound of my Mylar blanket, imagine what this room sounds like," she tweeted, attaching a photo of unaccompanied migrant children crowded into a cage at a border facility. "Fix it, Joe!"

It's possible that Boebert stumbled upon the kind of stunt, gesture or accident that can be forever associated with a presidential speech in the collective memory — think South Carolina Republican Joe Wilson yelling “You lie!” during a speech by President Barack Obama about the Affordable Care Act or, in a similar setting, the fly that landed on Mike Pence’s head during the vice presidential debate last October.

She doesn't have much competition for Biden's speech. Texas Republican Sen. Ted Cruz, a Boebert ally, appeared to have dozed off during Biden's speech, and South Carolina Republican Sen. Tim Scott, who is Black, took some flak on social media for declaring that America isn't a racist country after describing episodes when he confronted racism.

"Biden refused to bring attention to the crisis he created at the southern border," Boebert tweeted from the House floor. "So I did."

If attention is what she sought, she got it.

It was the fourth time in as many months that the confrontational Second Amendment advocate with the gun-themed restaurant in Rifle had become a trending topic.

The first time was in January, soon after the Jan. 6 Capitol riot, when the freshman lawmaker who had recently said she intended to carry a gun around Washington got into a standoff with security personnel after refusing to go through a newly installed metal detector outside the House chamber.

The second and third times were in March, when her numerous critics on the social media site had posted enough tweets of derogatory phrases — #Boebert4Prison and #BoebertSoDumb — to climb to the top of the site's U.S. charts. Boebert, for her part, helped amplify the attacks in fundraising pitches, urging her hundreds of thousands of Twitter followers to teach the libs a lesson about sticks and stones, or something like that.

Wednesday night, though, while cable news talking heads were telling viewers what Biden had just said and taking a stab at what it all meant, thousands of Twitter users were chattering about Boebert's latest antics.

"She's like a toddler you're stuck taking to a wedding because your sitter cancelled at the last minute."

"Or is she protecting herself from our Jewish space lasers just in case!" tweeted attorney Mark S. Zaid, referring to Boebert's fellow ultra-conservative House colleague, Georgia's Marjorie Taylor Greene, who was widely ridiculed earlier this year when it turned out she had once mused that California's wildfires were being set by the contraptions.

As usual whenever Boebert tweets something provocative — typically several times a day — hundreds of her detractors reply with insults and derision.

Some of the replies included pictures of her photoshopped to look like a scary clown, some attached a summary of her rap sheet, listing a series of arrests on minor charges. Without fail, several replies mention of the time the local health department cited her restaurant for allegedly sickening dozens at a rodeo by serving pork sliders that hadn't been stored at the proper temperature.

Aaron Reichlin-Melnick, with the American Immigration Council, took notice of all the commotion about Boebert's space blanket, but instead of joining the verbal fray, he hauled out some facts and figures.

"Meanwhile, while all this trolling goes on by Rep. Boebert and the right wing, the Biden administration has quietly been extremely effective over the last month at getting kids out of Border Patrol custody," he tweeted, along with charts and links to Department of Homeland Security data.

"The number of kids in Border Patrol custody has dropped 82% in a month," Reichlin-Melnick wrote, noting that the number of unaccompanied children in border patrol custody had fallen from a high of 5,767 on March 28 to 1,025 on April 27.

It’s an open question whether the voters of the reconfigured 3rd Congressional District will want to hire Boebert for another term next year — a half dozen Democrats are already running for the nomination, though the district's boundaries likely won't be known until sometime this fall — but they can’t say they were surprised with what they got.

Boebert, after all, knocked off a five-term incumbent by claiming Republican Scott Tipton was in cahoots with ultra-liberal New Yorker Alexandria Ocasio-Cortez and Boulder Democrats — or a Lafayette Democrat who represents Boulder, at least — when Tipton co-sponsored legislation with Colorado Democrat Joe Neguse to make sure cities, towns and counties back home got pandemic aid.

Colorado hasn't seen a combative congressional member like Boebert in some time, not since Republican Tom Tancredo — a Boebert endorser — left office a dozen years ago.

The former Jefferson County school teacher and one-time presidential candidate built a reputation on some of the same ground Boebert has been tilling, as an immigration hardliner with an outrageous quip always at hand.

Mostly pre-dating Twitter, he dispensed his portfolio of Tancredo-isms in speeches, debates and talk radio appearances. With just a few short months in office and the far-reaching app in hand, Boebert is already giving Tanc a run for his money.

Find a roundup of the developments by Colorado's D.C. delegation by Ernest Luning.