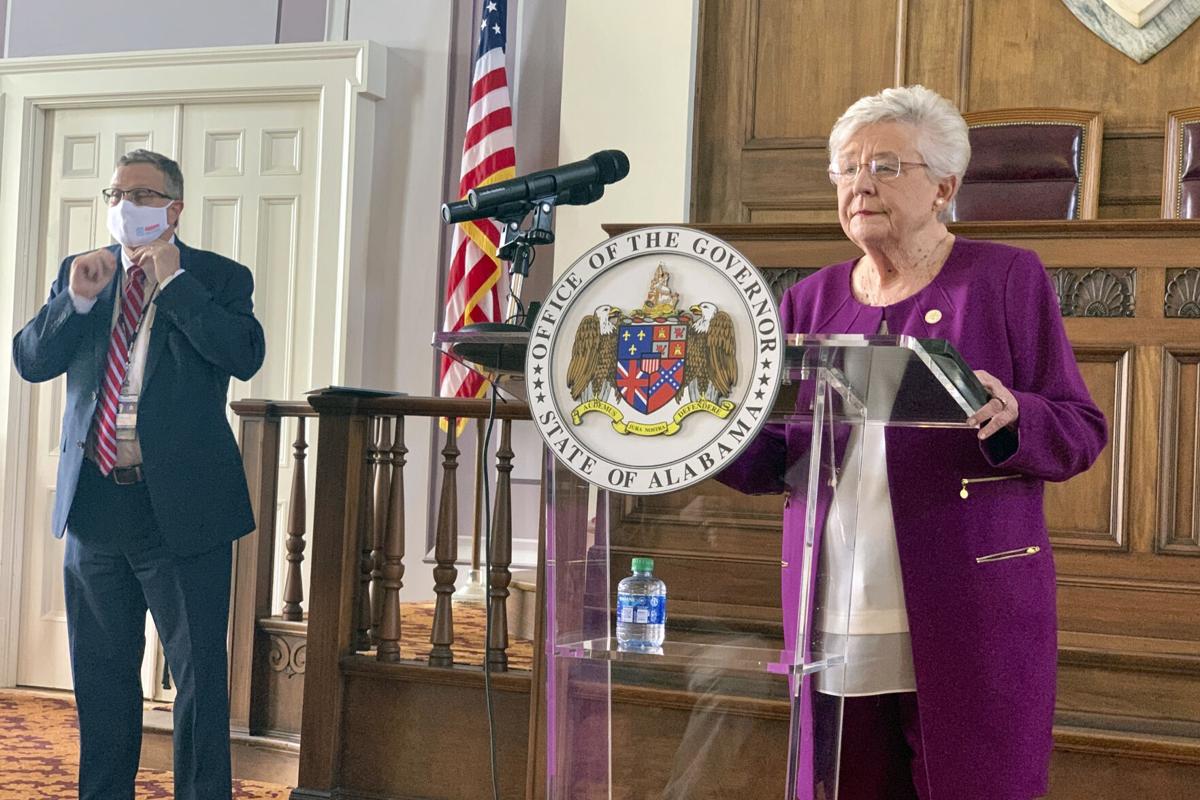 Alabama Gov Kay Ivey announces that a statewide mask order will be extended through Oct. 2, 2020 during a press conference at the Alabama Capitol in Montgomery, Ala., on Thursday, Aug. 27, 2020. Ivey said the state is seeing a drop in COVID-19 cases and that the requirement to wear masks will keep the numbers moving downward. 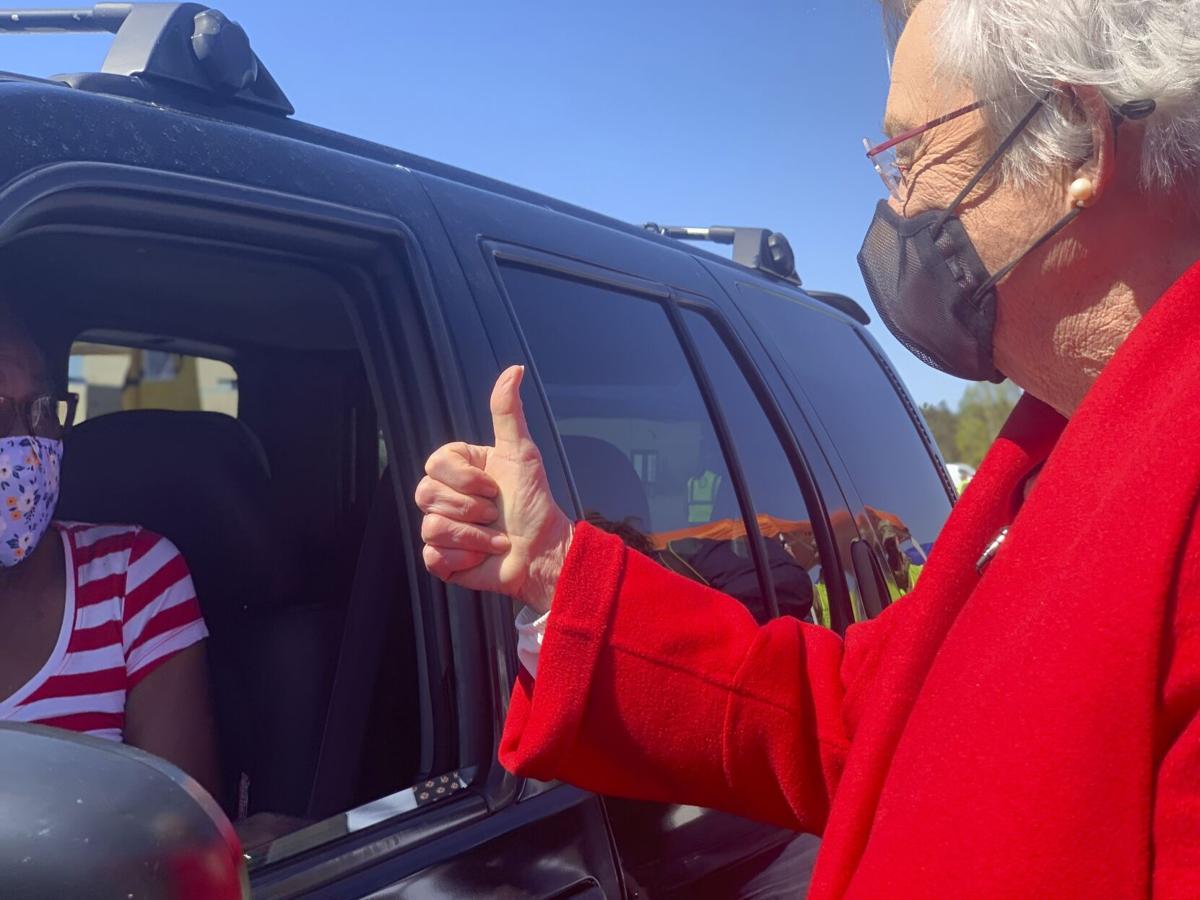 Alabama Gov. Kay Ivey gives a thumbs up to Doris Coleston after Coleston received a COVID-19 vaccination at a clinic in Camden, Ala. on Friday, April 2, 2021.

Alabama Gov Kay Ivey announces that a statewide mask order will be extended through Oct. 2, 2020 during a press conference at the Alabama Capitol in Montgomery, Ala., on Thursday, Aug. 27, 2020. Ivey said the state is seeing a drop in COVID-19 cases and that the requirement to wear masks will keep the numbers moving downward.

Alabama Gov. Kay Ivey gives a thumbs up to Doris Coleston after Coleston received a COVID-19 vaccination at a clinic in Camden, Ala. on Friday, April 2, 2021.

Kay Ivey, the matronly Republican Governor of rebelliously conservative Alabama, had had enough. Trying to preside over a state where barely one-third of the population is fully vaccinated against COVID-19, the nation’s oldest governor could bite her tongue no longer.

Hooray for Gov. Ivey. Whom I never expected to make the lede of a Colorado-based political column.

She went on. “It’s the unvaccinated folks that are letting us down.” And, “We’ve got to get folks to take the shot. The vaccine is the greatest weapon we have to fight COVID.”

Ivey was right both as to the individual stakes and in inferring the toll that the recalcitrance of the stubbornly unvaccinated is taking on the rest of us.

Just as the COVID virus continues to mutate and evolve, so does the public health response and the public debate. Over the last few weeks, it does not require a poll or focus group to gauge that a large, growing chunk of the public is fed up with the slow rate of new vaccinations and those resistant millions who refuse to roll up their sleeves.

For the vaccinated and unvaccinated alike, this is a summer of reopening and flexing of wings. However, one contingent does it with reasonable prudence while those still unprotected party with imprudent recklessness.

All the while, the virus marches on, now mainly in the form of the delta variant. In cities and rural areas alike, hospitalizations are again spiking and death rates climbing. But while there are anecdotes here and there of this befalling vaccinated individuals, the statistics show that this is almost exclusively the fate of those who have refused the vaccine or, somehow, have just never gotten around to it.

To be clear, the virus does not give a damn. It is devoid of emotion and could care less about silly politics. As our job is, or should be, to eradicate it or at least push it to the manageable sidelines, the virus’s job is to survive and grow, to spread and strengthen. It sure seems more resolute in its agenda than many of us are with ours.

The trend lines are ominous. The rate of new vaccinations is rather flat; vaccine resistance is emboldened; the disease is again rampant in many places. Other countries that just a few months ago looked with envy at our vaccine availability and regimen are surpassing us.

We are again talking of indoor mask requirements, closures, travel restrictions and an uncertain school year for kids who cannot afford another such interruption.

It need not be this way. Per an online meme in circulation, too many profess to be willing to take a bullet for their beloved country but shy away from a little jab in their upper arm.

Except for rare exemptions, Colorado requires a host of childhood vaccinations as a condition of child care or school or college attendance. It is a rather long list including hepatitis B, diphtheria, tetanus, pertussis, polio, measles, mumps, rubella and chicken pox. Others as well.

I am not to the point of mandating COVID vaccinations as a matter of law. Yet. But if the state can impose such routine requirements on children and families, why should not various entities, public and private, require the COVID vaccine as a condition of admission or employment or doing business?

If more employers along with colleges, transportation carriers, grocery stores, sports and music venues, and so on were to require the vaccine, herd immunity and a manageable end to this ordeal would be a whole lot closer. Credit to those already doing so and to the courts that have upheld the prerogative.

If Billy Joe or Suzy Jo want to still refuse the shot, that is their right. But let them make other arrangements for getting their groceries or finishing a degree or walking into a service center to apply for the latest government benefit.

And let them spend their Saturday night binging on Hulu while the rest of us are at the concert hall or sports arena or nice restaurant.

Of course, there can be exceptions offered for health or religious reasons. But those will be exactly that – exceptions, not the rule.

Persuasion should always be the first choice. But that has been the unending thrust now for months on end. We are left with two broad types of non-adopters. First are those who are just oblivious or think themselves bulletproof. Second are those who have taken this on as a sign of political resistance.

On that latter score, color me naïve but I have never found dying to be an effective political strategy or a way to build your numbers.

Beyond persuasion, the recent emphasis has been on incentives that have largely failed to move the needle. (Pun intended.) We have tried everything but toaster ovens.

The concern is that these financial inducements have actually had the opposite effect of adding to skepticism in some quarters. “If they’re offering me money and gift cards, and even a chance at a million-dollar drawing, there must be something wrong with the vaccine. Why else would they be trying to bribe me?”

There are some steps that should be shunned. The Biden administration has flirted with one in coordinating with Facebook and Twitter to identify posts containing vaccine misinformation. Of course, those falsehoods are out there in abundance. But the danger is real in getting any president in bed with social media companies to control information flow and content. That is a door better left shut.

As to those seeing tyranny around every corner, take a breath. Ease up on the paranoia. This is not the Soviets in Poland or the Chinese in Xinjiang or Hong Kong. Rather, it is a highly effective, semi-miraculous vaccine to safeguard us individually and collectively in a global pandemic. Nothing more.

Eighteen months into this emergency, it is time to shift the burden. Beyond their vastly elevated risk of hospitalization, intubation and even death, let those refusing the vaccine isolate and stay home while the rest of us go about our lives and again enjoy nice things.

An old saying goes, “You can’t fix stupid.” True enough. But you can sometimes prod it along.

Eric Sondermann is a Colorado-based independent political commentator. He writes regularly for ColoradoPolitics and the Denver Gazette. Reach him at EWS@EricSondermann.com; follow him at @EricSondermann on Twitter. Read his previous columns here.

SONDERMANN | No respite for Denver voters

All voting households will soon receive the infamous Blue Book with a summary of each issue along with pro and con arguments. This column makes no claim to that kind of even-handed objectivity. But here goes a quick, high-level overview of these 13 ballot items.