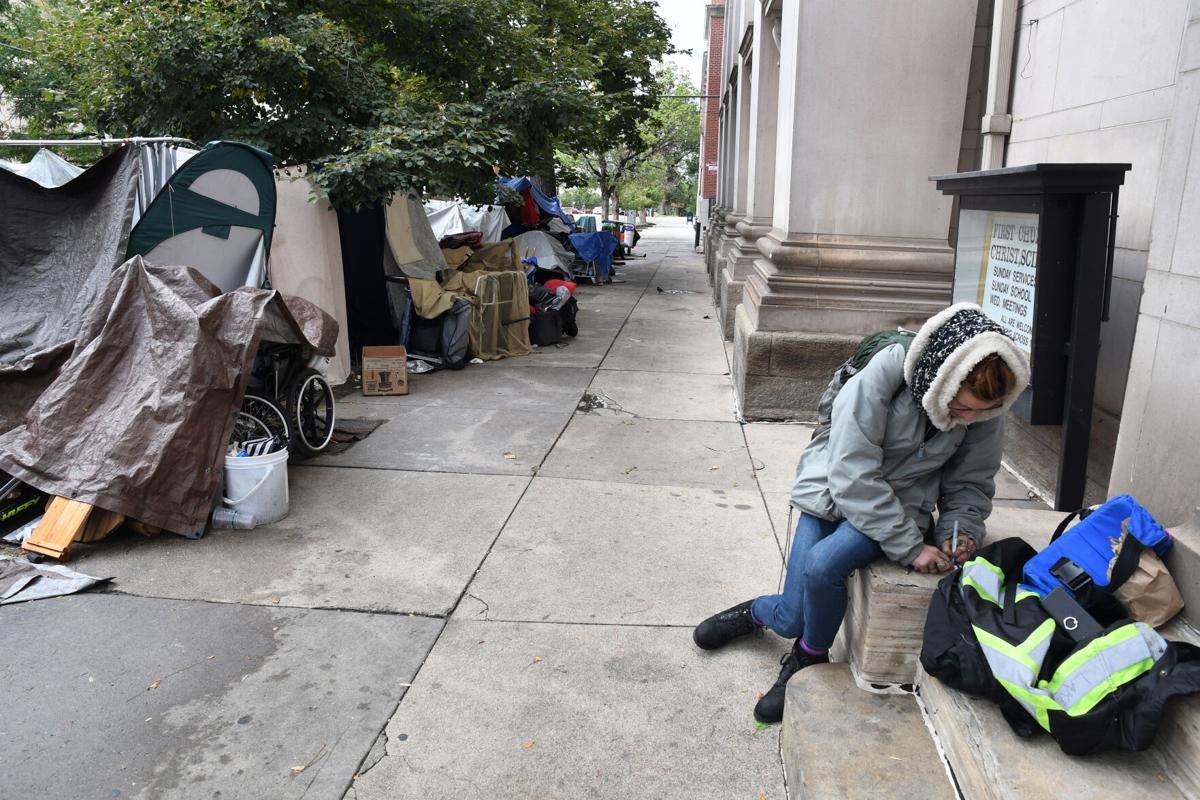 Clair, who only wanted to use a first name, gathers some of her belongings near a long row of tents along East 14th Avenue near Logan Street in Denver on Sept. 9, 2020. 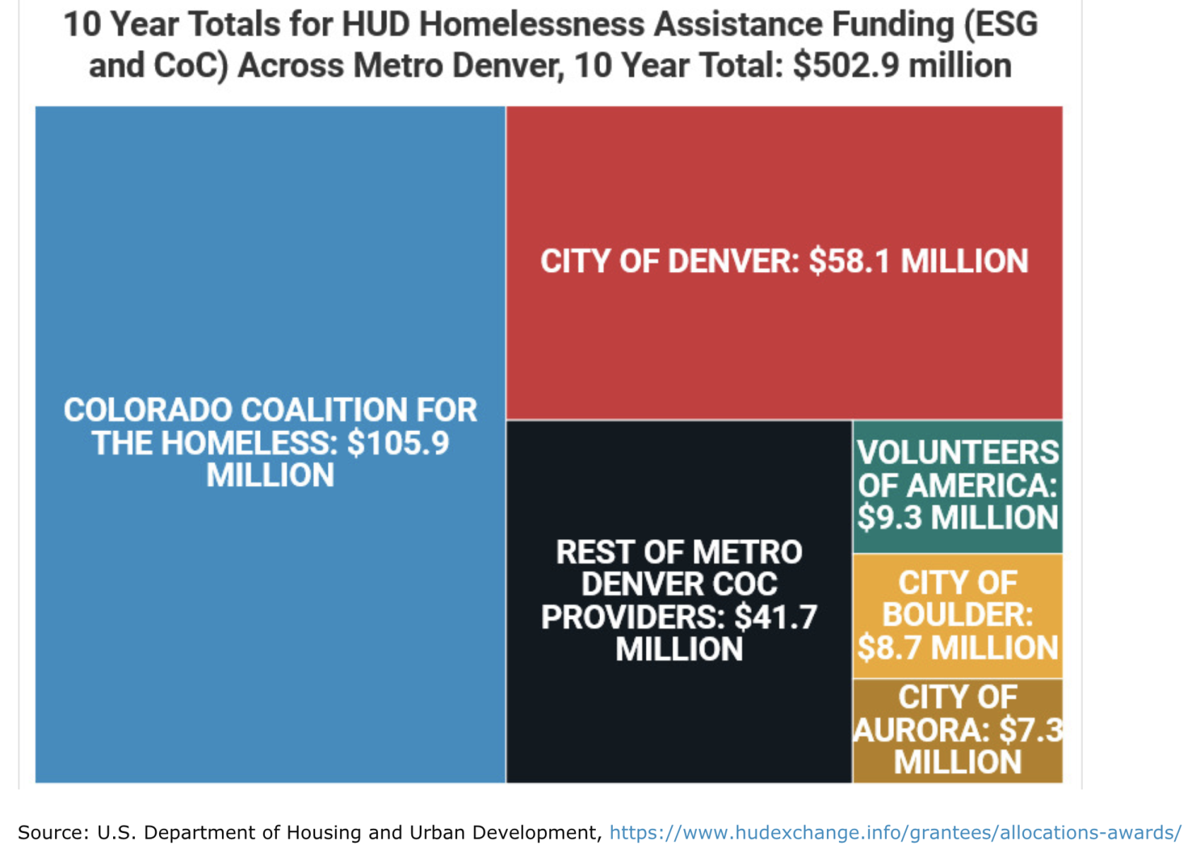 The dump trucks of money left on the doorstep of homelessness in metro Denver could build a lot more houses.

My friends over at the Common Sense Institute think tank joined up with a bunch of other informed do-gooders to tally up the massive amounts of cash spent to get people off the streets. You might want to sit down for this.

In the seven-county Denver metro area last year, the tab came in at $481.2 million to pay for shelters, police and fire response, health care, support from charities.

That's the supply of money, even though it's a sketchy calculation. The demand is calculated from a “point in time” survey done annually to measure how many people are homeless in the metro region.  On Jan. 27, 2020, the number was 6,104.

That works out to at least $41,613 per person on the streets from public and private do-gooders, but that's the starting point. It could be much more, if all the numbers were counted and, especially, once all the federal stimulus money is distributed by the state, counties and municipalities.

Let’s put that in perspective. The median family income in Pueblo, according to the Census, is a little over $40,450 a year.

My friend and protege Alayna Alvarez over at Axios Denver had a better take: What metro Denver collectively spends taking care of the homeless could rent each one of them two one-bedroom apartments a year.

Yet, the problem remains a wound on our great city.

When Alayna worked for Colorado Politics last year, she penned a great piece titled "Denver's never-ending road home," which explained why we never seem to get there.

The city quibbled that the total cited in the Common Sense analysis doesn’t take into account that some charities and funds do more than just help the homeless. There's also $98.3 million in federal coronavirus relief in that mix. A state stimulus packaged added another $28 million.

The cash register is spinning like a slot machine.

You can read it by clicking here.

The report has two more parts that will follow this fall: measuring the money against outcomes and an online tool to maintain a finger on the pulse of the issue.

The day before the Common Sense Institute rolled out its horse-sense report, the city of Denver released its five-year plan to address the issue, including building 7,000 homes. Thus is the latest in what seems a never-ending list of campaigns and promises that, so far, haven't panned out.

In 2005, after all, then-new Mayor John Hickenlooper released with fanfare a program called Denver's Road Home, a 10-year pledge to end homelessness. A decade later, when he was governor, Hick told Colorado Public Radio's Ryan Warner, "No one is more disappointed than I am," after the city auditor released a damning assessment.

A followup audit in 2019 found, as one of its tip-top assessments, "Road Home lacks a strategic plan to address homelessness and has no communitywide performance metrics."

Taxpayers are constantly asked to do more to fix a problem that never gets fixed.

Last November, Denverites approved a Initiative 2B, a tax hike calculated to cost the average city household an extra $5.25 per month to generate $40 million a year over the next decade to address homelessness.

“This vote is a game-changer in our efforts to support residents experiencing homelessness,” Mayor Michael Hancock said after the election.

OK, this time, he means it.

Mike Zoellner, chair of the Downtown Denver Partnership, is the former finance chairman of the Together Denver campaign, which focused on addressing homelessness

He said the Common Sense report whittles away some of the misinformation and replaces it with numbers that can make a difference.

“There's not a baseline of information and data that we can then go on to say, ‘OK, do we need to spend more money? And if so, where, and are we spending too much in another area and not getting results?’ ” he said.

He hopes knowing what the metro area is up against will break down silos and change the outcomes, where not much has so far.

“If we want different outcomes, we have to take different approaches," he said.

Speaking volumes, the Common Sense Institute could not fully add up the cash in spots because of a lack of reliable data, which is troubling for the public dollars allegedly spent for all right reasons.

The way to the wallet of the righteous is through the heart, so keeping a clear accounting shouldn’t be too much to ask.

If they can’t tell you where it’s going, it’s probably not going toward a solution.

Ideally by knowing how much is being spent is a roadmap to spending more wisely. What the Common Sense report tells me is that if we're throwing money at the problem, our aim is horrible.

Joey Bunch: "Without question, those with the least suffered the most the past year. Folks with lower-income jobs — restaurant and hotel workers, childcare providers, teachers, moms — are still being tossed by the receding floodwaters of this economic storm."

INSIGHTS | Veterans getting attention they deserve at the Colorado Capitol

Senate Bill 129 would task the Colorado Department of Human Services to work with established nonprofit organizations to offer free counseling for post-9/11 veterans and their families.

Joey Bunch: "There are two kinds of shoes on Denver’s 16th Street Mall. I’ve walked in both."

Say this about the new Denver City Council. They care.

Ben Carson was relaxed, even chatty, the morning before he addressed the 2019 Western Conser…

INSIGHTS | The push for masks meets an equal, opposite force

Joey Bunch: "The struggle over wearing a mask for the common good only proves that good is no longer all that common."

Joey Bunch: "Hick can't tap dance like Trump, but he better be picking up the tune."

Colorado voters will get the chance to vote on lower property taxes this November.

A legislative committee gave a formal go-ahead to the process that determines how the state will spend nearly $700 million in federal money.

9/11 evokes memories and a sense of patriotism and unity, as well as a renewed fear it could happen again.

INSIGHTS | America has endured pain, politics way worse than this

Our nation has been divided by politics, economics and public health repeatedly, and it seems a tall order to become one nation under God (or your higher being) again, but we always have and, I believe, always will. We're American. It's what we do.

The solutions need to be as varied as the problems that cause homelessness in the seven-county Denver metro area, according to the second phase of a Common Sense Institute analysis released Monday morning.

The suit was filed Wednesday in Denver District Court by Dan Burrows of the Public Trust Institute on behalf of four Denver residents and Denver Deserves Better, a group “established to oppose the City’s notoriously expensive and unsuccessful management of homeless issues.”