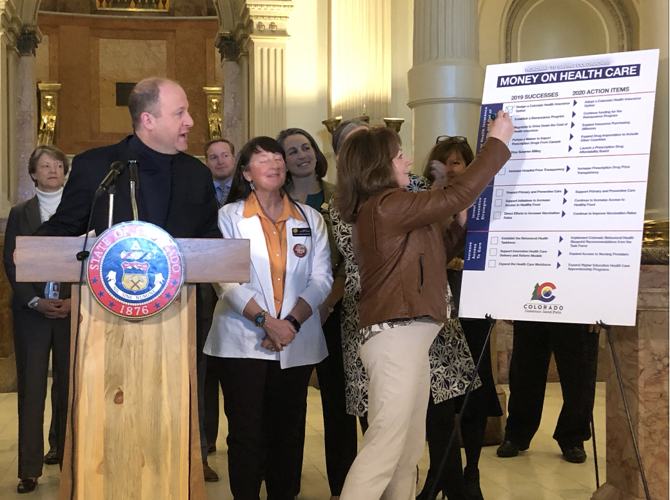 Gov. Jared Polis announces his administration's accomplishments on reducing health care costs, as his lieutenant governor, Dianne Primavera, marks them off during a press conference at the Colorado Capitol on Thursday, Feb. 27, 2020. 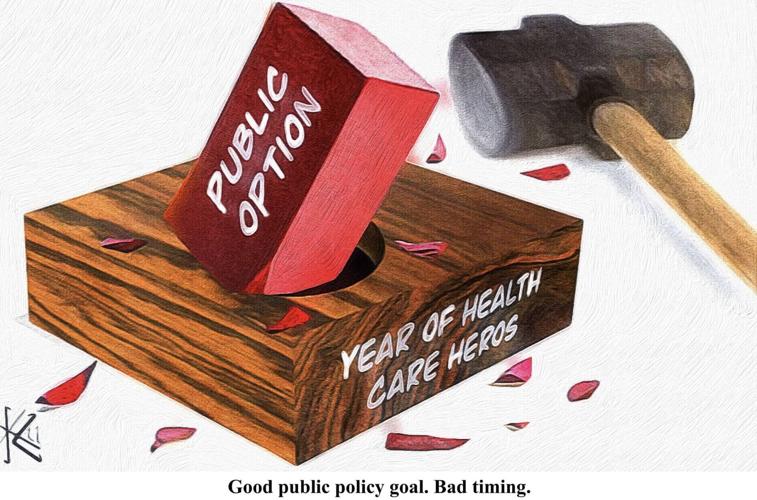 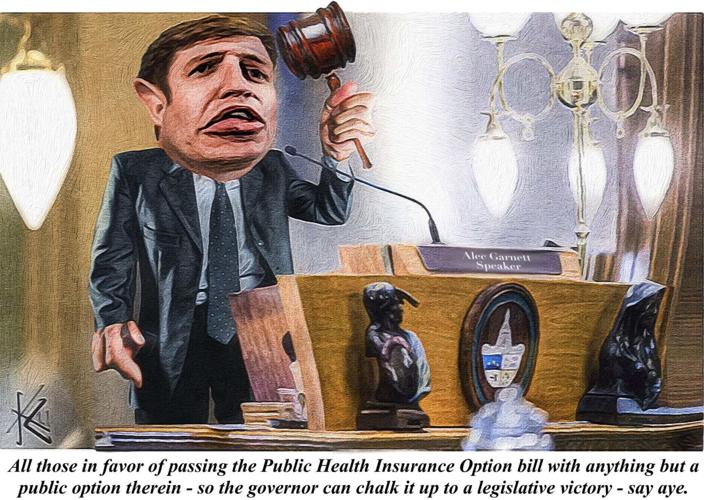 If you thought you saw an unidentified aerial phenomena above the state Capitol, let’s say it was swamp gas over the Colorado public option, which isn't public and not much of an option.

I’ve been following this public option policy discussion since I was in high school, or maybe it just feels that way, but as it made its long-awaited descent to the governor’s desk, it lost its center of gravity and still managed to land, albeit with a thud.

A public option insurance policy, I thought, was the end goal, but what we got was a hammer and a threat to use it three years out.

House Bill 1232, demands cheaper premiums, 15% in three years. If the industry misses that target, plus inflation, the commissioner of insurance will step in and set prices for the services offered by doctors and hospitals unilaterally to get the rate down.

The state also would create a below-market policy for the individual and small group markets, which would be offered by private insurers in all 64 counties, to create competition and a lower price. One of the reasons that insurance rates are so high in the high country is because there's no competition for individuals and small businesses.

Is it a fair competition, though, if the government can deploy caps on reimbursements to control the cost of its policy?

Saving money comes with a price, though.

Rural hospitals and clinics have thin profit margins, which leaves a narrow margin for error from unintended consequences.

Chris Brown over at the Common Sense Institute ran the numbers on what cuts in payments to doctors and hospitals would mean, back when the bill’s reduction target was set at 20%. He said that would cost health care providers $830 million to $1 billion by 2024, which equates to losing 3,900 to 4,900 jobs.

Even if you scale it back a quarter, that’s still painful.

With the money and ambition at play, this was always going to be a pitched fight. But there's a picture bigger than what happens in Colorado.

Washington struggled to launch the country's first state public option in 2019, which required the legislature to strengthen with a "2.0" bill this year. Other legislatures might hesitate before taking on this politically bloody fight.

If it can't jell in blue-trending Colorado, with clear Democratic majorities and a cost cutter in the governor's office, where can it?

Toss in that it appears President Joe Biden has cooled on a national public option. As national Democrats try to persuade him, walking away from the legislative session with nothing was never an option.

It’s politically savvy to take what they can get, declare it a win and put this on ice for three years.

Keep in mind, this time next year, when legislative redistricting is done, incumbents might be running in far more moderate districts.

Nobody likes to erase a good talking point, but they'll give it lip service all day long.

This lip service mumbled because the usual allies were saying opposite things.

State Sen. Kerry Donovan, the Vail Democrat who plans to take on Lauren Boebert for a congressional seat next year, said advocates refused to accept the status quo.

“Because whether you’re a raft guide in Steamboat, a small business owner in Denver or a ranching family in Bennett, this bill will make a real difference in your quality of life,” she said in a statement the day after her legislative win.

She said it addressed racial and geographic equity.

Sen. Rhonda Fields of Aurora, another of the chamber’s most respected Democrats, says it doesn’t; that people of color will still lack access, regardless of the lofty promises of HB 1232. Promising it is little more than saying it, from her view. This legislation doesn't ensure health care for minority neighborhoods.

She added, "And yet we had this bill that wanted to penalize doctors and hospitals," taking on the very people who have risked their own lives to protect ours the last 14 months. "That's the wrong message at the wrong time."

Nonetheless, she voted with her party to keep the bill alive.

"Small businesses are supportive of this legislation because it would help lower their costs and make it easier to access coverage," said Lindsey Vigoda of the Small Business Majority.

Not so fast. Tony Gagliardi, the state director for the National Federation for Independent Businesses, said it's true that the cost of health insurance is now into its 30th consecutive year as the No. 1 problem of small-business owners, based on NFIB’s latest survey of members.

“The so-called ‘public option’ plan will eventually become a no-option plan, given how proponents have set up private insurance carriers to fail,” Gagliardi said.

“It can be no other way. Creating a health-care czar, under the disguise of an ombudsman who can dictate the thresholds insurance companies must meet or lose their customers to the public option plan is not expanding medical choice but constricting it until the point of submission.”

Democrats, however, look at this strange being that landed in Denver and say, "I want to believe."

From the Left: The Public Option

From the Right: The Public Option

Laura Giocomo Rizzo: "It is illogical and short-sighted to believe that the state can demand insurers and health care providers arbitrarily reduce their costs by 18% without consequences elsewhere in the system. And so, this is where the real concern lies: this legislation won’t solve any of our health care cost challenges – it simply shifts the burden."

Public option proposal clears the House on a party-line vote

The final version of the bill is significantly different from the introduced version, reflecting negotiations to bring stakeholders in the health care field away from positions of outright opposition.

From doctors to deliveries and the comings and goings of tax rates on property, it was a dizzying session for dollars flowing into and out of …

GENERAL ASSEMBLY 2021 | Wrapping up the path of the Colorado Option

Colorado Politics covered the ins and outs of the bill as it has made its way through the General Assembly. Read our extensive coverage of the bill, its changes, the stances for and against and in-between, and its journey.

INSIGHTS | Stimulus, stimulus everywhere and just a drop for the Water Plan

Joey Bunch: "If you depend on water in this state — wait for it — then you should be a little disappointed in how economic relief was divvied up during the last legislative session."

Fresh out of quarantine from a positive COVID-19 exposure, U.S. Sen. John Hickenlooper was in Denver Monday to help promote a national call for Congress to lower health care costs, including for prescription drugs, and to reduce the racial disparities in health care.

INSIGHTS | 'Equity' across Colorado is a slippery equation

If you’re like me, you only have a walking-around understanding of equity, even though it’s the political buzzword of 2021.

The Colorado Democratic Party is sponsoring a series of virtual town halls devoted to contentious issues through the year, featuring experts and elected officials in what the party says are intended to be conversations that lead to solutions.