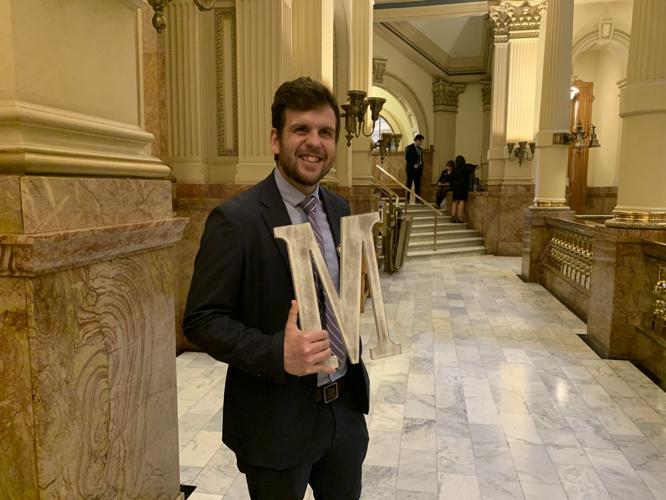 Showing off the capital M of Capitol M: Rep. Javier Mabrey, D-Denver, whose district includes west Denver, Mar Lee and Harvey Park, among others, in his first week as a new lawmaker. 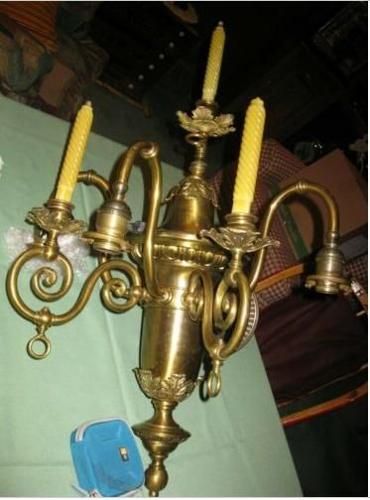 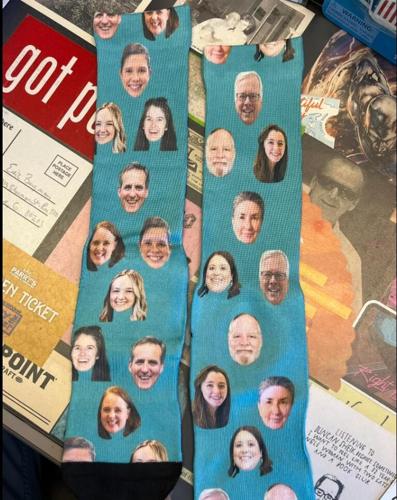 Someone with way too much time on their hands came up with this just before the start of the session. Photo courtesy Eric Bergman, because of course. 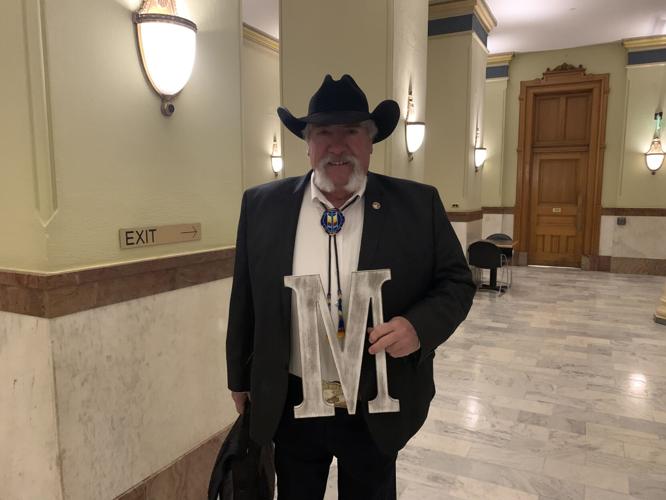 Sen. Perry Will, R-New Castle, who was sworn into office on Jan. 12, with the capital M of Capitol M.

Welcome back to Gold Dome High and the 2023 legislative session!

It's already off to a good start.

First: To whomever came up with the idea for Colorado Counties, Inc. socks, Capitol M is in awe.

Second: Hats off to Senate President Steve Fenberg, who decided that he wanted to bring everyone to the table, just as soon as he figures out how to put it together.

As Senate President, I pledge to bring everyone to the table...I just have to build it first 👷‍♂️#coleg #copolitics pic.twitter.com/wzBAsPkKUG

Best comment on Twitter was from Trish Zornio, who said she didn't know the lege was being sponsored by Ikea.

Anyone got an extra $9K laying around?

This piece of Colorado history has shown up on eBay.

The seller claims it is an original bronze wall sconce from the 1890s to 1908 that was taken down during restoration work in the 1950s and discarded. Price is $8,995, a bargain, right?

The seller's description says the the sconce has been completely re-wired and the gas burners are still gas and not converted to electricity. The glass shades are original to the Capitol and acid-etched with the state seal.

Hat tip to Sage Naumann for spotting the sale.

Cannons and other missteps from Gov. Jared Polis' first day of his second term

The blast of 38 blanks from cannons in Lincoln Park during the inauguration ceremony Tuesday for Gov. Jared Polis drew applause — but not from everyone.

Denver Police reportedly received dozens of complaints about the blasts. It also appeared to have rattled some folks, who complained of being triggered by the unexpected noise — think veterans or victims of gun violence. The 38 shots signified Colorado's position as the 38th state.

Can't imagine what will happen when Colorado hits 150 in three years. Get your ear plugs now!

Then came the inaugural ball at the Mission Ballroom Tuesday night. The inaugural committee had a $1 million fundraising target to cover the costs, plus charging folks $75 per ticket to get in. That did not include parking.

Did you know the Mission Ballroom is just a block or so away from the National Western Complex? Where the Stock Show is currently being held, which draws hundreds of thousands of folks every year? Did you know there are nightly rodeos, a crowd-pleaser that drew thousands of people, and their cars, to the tiny network of short streets surrounding the National Western ?

Apparently whoever decided the Mission Ballroom (a wonderful facility, by all accounts) was a good location for the ball never bothered to look at what else was going on in the area. That person deserves the biggest of all goose eggs.

Common sense dictates that you don't go anywhere near the National Western neighborhood in January unless you're planning to go to the stock show. Sympathies all around to those who coughed up $75 per ticket and couldn't get to the event. There wasn't a parking place to be had, especially when the ball started.

The traffic jam alone was one to remember. Capitol M spent an hour on Wynkoop near the Mission, and moved all of two blocks in that hour. And then gave up and went home. Some who did make it to the ball commented that Capitol M made a pretty good decision.

Speaking of the Stock Show...

The chairs of the agriculture committees have big shoes to fill this year in the competition to see who can raise the most money for the Stock Show's Junior livestock auction. For the last 16 years, the lege has had the benefit of strong-arming (sort of) from cattle rancher and farmer Jerry Sonnenberg, who served eight years in the House and followed it with eight years in the Senate.

In honor of the @NationalWestern Stock Show, @commish_pelton hooked my desk up with a bull to join the Homies! #coleg pic.twitter.com/Y1ou4MednQ

And while he isn't the chair, Rep. Richard Holtorf of Akron is doing his best to drum up the bucks. He's been at the well in the House every day to encourage donations to the lege's stock show auction fund.

He's one of two ranchers in the House this year. The other is Rep. Ty Winter of Las Animas County, who is a fourth-generation rancher and farmer.

The Senate, on the other hand, has three ranchers who are helping to beef up the competition: the Pelton boys (cousins Byron of Sterling and Sen. Rod of Cheyenne Wells), and Sen. Cleave Simpson of Alamosa.

Thursday, the Peltons took to the Senate floor to vigorously advocate for their members to keep up with the House. Capitol M heard a rumor that Sonnenberg, now a Logen County commissioner, should not be too surprised if he gets a call from his former colleagues in the state Senate asking him for a contribution.

The Junior Livestock Auction will be on Jan. 20. Traditionally, lawmakers bid on animals being exhibited by Colorado teens.

Money from the auction goes to the exhibitor, with a portion donated to the stock show's scholarship program.

A tip of the hat to a small town and its famous residents — or how Sen. Perry Will learned how to duck

The little town of Cheyenne Wells, population 738, is definitely punching above its weight as far as the Colorado legislature is concerned. There are now three lawmakers with origins in Cheyenne Wells, the county seat of Cheyenne County on the Eastern Plains.

Byron Pelton grew up in Cheyenne Wells, while his cousin and colleague still lives there.

The third? Will, who was sworn into office on Thursday and who grew up in Cheyenne Wells, but has called New Castle home for the last 50 years.

Will recounted a story about duck-hunting with members of the Pelton family when he was a kid.

Due to a bit of a mishap, when the ducks went flying from the pond, somebody hit Will on the side of his face with a little buckshot.

Will, rubbing his face while he recalled the adventure, learned how to duck after that.

The lighter side of the state Capitol, usually