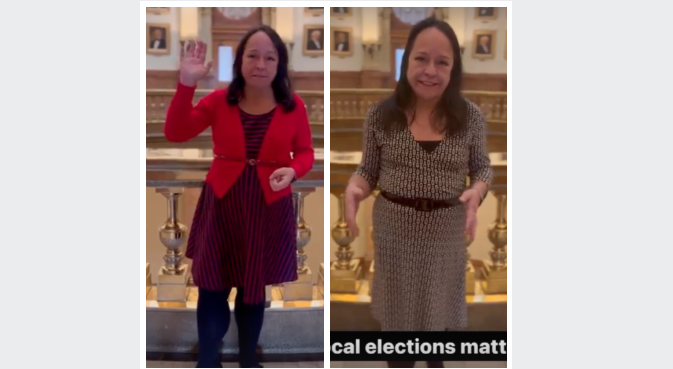 Sen. Faith Winter, in two of the 100(!?) dresses she intends to wear in the 2022 session. Courtesy MoreThanADressFaithWinter 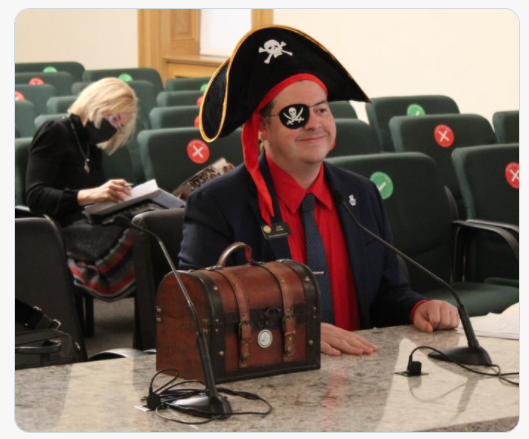 Allegedly this is a photo of Rep. Alex Valdez, D-Denver, who was presenting a bill on porch piracy. Photo courtesy GES Gazette, a publication covering the Globeville, Elyria and Swansea neighborhoods.

Sen. Faith Winter, in two of the 100(!?) dresses she intends to wear in the 2022 session. Courtesy MoreThanADressFaithWinter

Allegedly this is a photo of Rep. Alex Valdez, D-Denver, who was presenting a bill on porch piracy. Photo courtesy GES Gazette, a publication covering the Globeville, Elyria and Swansea neighborhoods.

President Leroy Garcia’s staff are on the job this week, making sure there are no shenanigans afoot to move the State Fair out of Pueblo. Not that nobody tried.

The first attempt came out of a hearing Tuesday on a bill that would change how the members of the State Fair Board of Authority are appointed, and from where. During the hearing, SB 42 sponsor Sen. Don Coram of Montrose risked the success of his bill by briefly (and, jokingly, fortunately for him) suggesting that the state fair ought to be moved to the Western Slope.

Coram said he thought Garcia was going to be a co-sponsor. Apparently since he isn’t, Coram took his revenge.

Turns out the staffers in the Senate Dems’ office were listening in, and rushed to warn Garcia that the affable Coram was up to his old tricks.

Here’s the problem: Capitol M recalls Coram saying just last year that he didn’t want the state fair or the National Western Stock Show on the Western Slope. “We don’t want all those people,” Coram quipped. “They might want to move here!”

The next attempt to swipe the State Fair was on Thursday, when Majority Leader Steve Fenberg asked for a third-reading amendment on SB 13, which is mostly a clean-up bill to change the statutes governing some of the more than 300 state boards and commissions, some which needed changes due to redistricting.

The amendment would allow the state fair board to be changed in the way SB 42 intends, should that bill pass. SB 42 was heard by the Senate State, Veterans and Military Affairs Committee Tuesday night but laid over until the potential conflict with SB 13 could be dealt with.

Minority Leader Sen. Chris Holbert of Parker felt it was necessary to point out, to Garcia’s probable relief, that this was NOT the amendment to move the State Fair out of Pueblo. Apparently that's coming? Stay tuned.

Another board that would be affected by SB 13 is the Commission on Aging, which is the subject of a House bill in the works.

Fenberg may have jeopardized his chances of becoming Senate President next year (assuming Democrats maintain control of the Senate in November), when he quipped that some members might want to take a 17(c) on that House bill. Ouch!

For newbies, a 17(c) is a Senate rule that allows members to avoid a vote because of a potential conflict of interest.

Although to be honest, Capitol M is willing to bet that the average age of Democratic senators is probably lower than it is for Republican senators. So this could be viewed as a none-too-subtle dig at the minority. Maybe.

Keep an eye on Sen. Faith Winter of Westminster this year.

She’s come up with a novel fashion idea for 2022: each day, she wears a dress that tells a story. For example, on Feb. 1, she wore a dress that she’s had for a LONG time, dating back to 2007, when she was on Westminster City Council. The message that day? Local elections matter.

On opening day of the 2022 session, she wore the same dress that she wore on the first day she was a lawmaker in the House in 2014. She chose, back then, as now, a red and blue dress to show her pride in her country, proud to be elected and to stand up for voting rights.

Winter acknowledged that women politicians are judged on what they wear.

Capitol M’s big question: Does she have 100 different dresses for the 120 days the lege is in session? Stay tuned. I intend to count.

Winter’s daily messages can be found on Instagram, here, under “MoreThanADressFaithWinter.

One way to ensure your bill gets noticed? Pirate hat.We'll have information on @ValdezforCO's bill aimed at thwarting porch pirates, as well as other legislation important to the G.E.S. community, in the next issue of the G.E.S. Gazette, coming out later this month. pic.twitter.com/Y69BjsjcK0

The lighter side of the Capitol, and a salute to everyone who got through the 2022 session: lawmakers, staff (partisan and nonpartisan), repor…