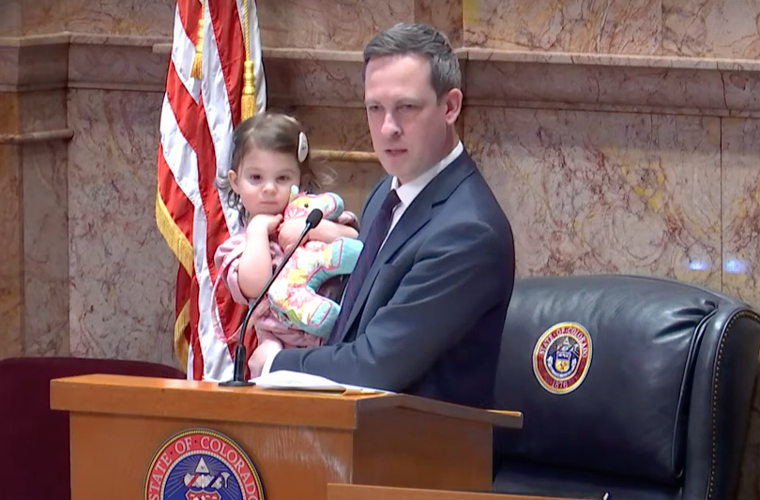 Newly installed Senate President Steve Fenberg of Boulder, showing that he is not above using his daughter, Isa, to get people's attention. Courtesy Colorado Channel.

Departing Senate President Leroy Garcia, during tributes on Tuesday, Feb. 24. Among those sitting with him, his son Xan; his parents, Leroy Sr., and Lorraine; and Lindsay Urban, wife of new Senate President Steve Fenberg, and daughter Isa.

Newly installed Senate President Steve Fenberg of Boulder, showing that he is not above using his daughter, Isa, to get people's attention. Courtesy Colorado Channel.

Departing Senate President Leroy Garcia, during tributes on Tuesday, Feb. 24. Among those sitting with him, his son Xan; his parents, Leroy Sr., and Lorraine; and Lindsay Urban, wife of new Senate President Steve Fenberg, and daughter Isa.

The state Senate was a wistful place on Tuesday, when Senate President Leroy Garcia banged the gavel for the last time, as he departs for a job with the Biden administration. (Please don’t ask me to repeat the unbelievably LONG job title again.)

After senators unanimously elected Senate Majority Leader Steve Fenberg of Boulder to take the helm, he noted that when he talked about the presidency with his wife, Lindsay, she asked if it came with a raise. “I didn’t answer the question,” Fenberg told the Senate. “I quickly changed the subject.”

Amidst the tributes and congratulations to Garcia on Tuesday, however, Senate members couldn’t resist a dig or two, especially over the day that colored Garcia’s first year as President: March 11, 2019. That was the day that Sen. Bob Gardner of Colorado Springs asked that a 2,023-page bill be read at length.

Senate Reading Clerk Andrew Carpenter read for a couple of hours, despite battling a cold. Eventually, the decision was made by someone to set up a bank of six computers that all read different sections of the bill. At 600 words per minute, it was pretty much unintelligible. You could catch a number every once in a while that, out of context, made no sense.

That led to a lawsuit by Senate Republicans against the Senate Democrats, one that went all the way to the Colorado Supreme Court, which mostly sided with the GOP.

While several Republican senators kidded Garcia about that day, Fenberg got into the act, too, joking that the computer bank wasn’t HIS idea.

The tributes ranged from jokes to acknowledgements of his friendships with many, including comments from the parting notes Garcia gave to his Senate colleagues.

Sen. John Cooke of Greeley said the note he got from Garcia said, “Work hard, but not hard enough to win the majority back.”

“I don’t really need to mention the lawsuit,” Cooke said. “But I will,” he joked.

Sen. Julie Gonzales of Denver brought gifts. “DC can be a very strange place," she said. The gifts included a candle, for moments of difficulty and prayer; and, a single-use plastic, to remind him of her (and of her bill to ban them, which may have given Garcia  bit of heartburn). And last, “I know first hand, living on the East Coast can be rough, but may times never be so difficult that you have to resort to eating Hatch green chile," she said, holding up a can of the dreaded garbage from New Mexico.

And then she told him she looked forward to moving the State Fair to Denver.

“I’d love to know what’s going through your mind right now,” Sen. Bob Gardner of Colorado Springs said to Garcia. His note from Garcia said, “A part of me will actually miss you,” which apparently was funnier than it sounded.

“Let me assure you, all of me will miss you, particularly when the lash of Boulder finds his chops and imposes double-digit fines,” Gardner said.

Garcia’s final comments at the well before he departed was to welcome his successor in Senate District 3, Nick Hinrichsen, who attended Tuesday’s session.

Unfortunately, Garcia forgot, FORGOT, to ask for a moment of personal privilege to do the introduction, for which he was scolded, sort of, by the new Senate President.

“The student has become the teacher,” said a rueful Garcia.

In the words of President Ronald Reagan: “Some people spend an entire lifetime wondering if they made a difference in the world. But, the Marines don’t have that problem.”

The state Senate on Monday officially welcomed its newest member, Sen. Nick Hinrichsen, who was elected by a vacancy committee on Feb. 19 to r…