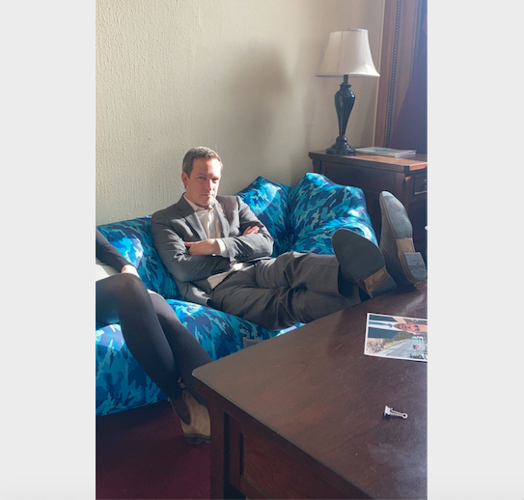 Senate President Steve Fenberg of Boulder, finds that his comfy couch has been replaced by an inflatable couch - and with a mock grumpy look to go with it. Photo courtesy Senate Majority staff, which Capitol M decided won April Fool's Day, 2022. 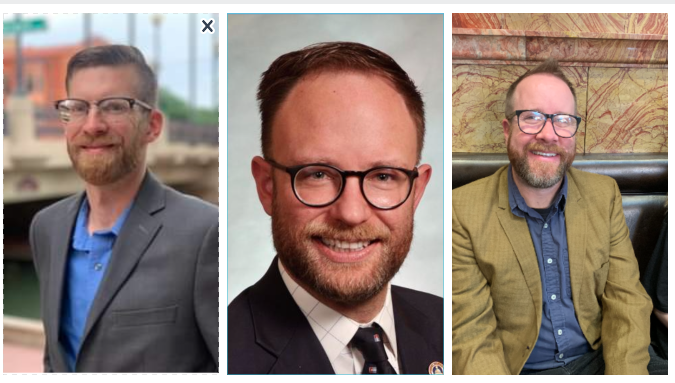 At left, not Rep. Matt Soper of Delta; center, not Kevin Holmes (Rep. Mandy Lindsay's husband) and, at right, not Sen. Nick Hinrichsen of Pueblo. 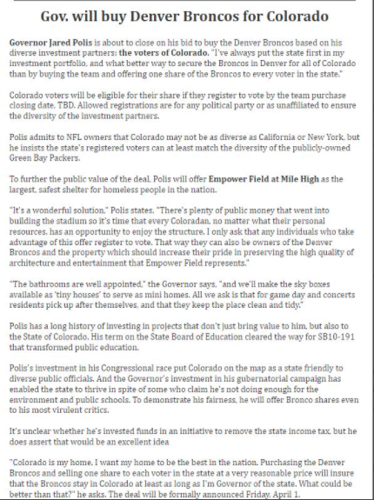 A plan by Gov. Jared Polis means Coloradans would own the Denver Broncos, following the lead of the Green Bay Packers, and with a MUCH better quarterback. Courtesy Colorado Capitol Watch.

April Fool’s started early – with a 10 p.m. announcement on March 31 from Colorado Capitol Watch that the governor is buying the Denver Broncos with public funds, making the taxpayers of Colorado the new owners. As a taxpayer and part-owner, Capitol M's first decision is to advocate that Empower Field be moved to Pueblo.

That taxpayers buying the Broncos is an April Fool’s joke is a real pity – to be honest.

Gov. Jared Polis did get into the act on Friday, announcing through his spokesman that he’s taking cliff-diving lessons at Casa Bonita, which one might view as an attempt to find a more respectable career.

According to the announcement: “You can catch Gov. Polis cliff diving at Casa Bonita every first Friday in odd number months beginning April 1, 2023. The governor has begun training with Colorado’s renowned Olympic athletes at the US Olympic Training Center in Colorado Springs.”

He also declared Casa Bonita to be the state Capitol. There might be a few folks who think that just might be an improvement over the food in the Capitol cafeteria.

An April Fool's Day to live in infamy

In the Senate, lawmakers found themselves invited to the inaugural meeting of the Kerry Caucus. The caucus’s focus? County Kerry, John Kerry, Kerry Butler, Kerry Washington and Kerry dogs. While all are welcome, only those who can prove they have a first or last name of Kerry are allowed in.

But the winner of April Fool's Day this year, as determined by Capitol M, is the Senate Majority staff, who hauled Senate President Steve Fenberg's usually comfy couch out of his office and replaced it with an inflatable couch.

In the tradition of great comedy duos, such as Abbott & Costello, Laurel & Hardy or Jay & Silent Bob, the House recognized National Bootlegger (or Bootliquor) Day, as announced by the "Jay" of the chamber – Rep. Richard Holtorf of Akron and his "Silent Bob" accomplice, Rep. Andy Pico of Colorado Springs.

"Jay," who is the more loquacious of the two, told the House that Templeton Rye whiskey (which is based in Iowa), shares its birthday with bootleggers like Al Capone and the sons of bootlegger Meryl Kerkhoff. The term refers to the 1800s practice of concealing a flask of booze in a boot top, and Holtorf went on to recite what he knew about Prohibition, its connection to the mafia and famous gangsters, and the importing of booze during the early part of the 20th century.

As it turns out, there really is a National Bootleggers Day. It's January 17th.

For April Fools, we had @SenadoraJulie and @SerenaForCO change it up for the unsuspecting and take each other’s place and switched chambers during announcements and introductions. #coleg #copolitics #AprilFoolsDay2022 pic.twitter.com/DeqLQbTTO3

An imposter was discovered in the Senate on Friday, attempting to take the place of Sen. Julie Gonzales of Denver during the morning roll call. There was another similarly-named individual in the House, also attempting to impersonate Rep. Serena Gonzales-Gutierrez of Denver, and who also tried to replace the Assistant Majority Leader.

It wasn’t the only shenanigan under consideration on Friday: Sen. Nick Hinrichsen of Pueblo said that he and Rep. Matt Soper of Delta had an idea to switch and see if anyone noticed. However, Sen. Nick said he put the kibosh on that idea because he feared Soper would cast votes that Hinrichsen wouldn’t approve of.

As it turns out, there was a Soper/Hinrichsen imposter on the House floor Friday – Kevin Holmes, the husband of Rep. Mandy Lindsay of Aurora.

The highlight (?) of the morning may have been two resolutions offered by the the newly-formed suburb caucus, which includes Reps. Meg Froelich of Greenwood Village, Matt Gray of Broomfield, Lindsey Daugherty and Brianna Titone of Arvada, Shannon Bird of Westminster, Lisa Cutter of Littleton, Monica Duran of Wheat Ridge, Kyle Mullica of Northglenn, Yadira Caraveo of Thornton, Iman Jodeh of Aurora and Tim Geitner of Falcon.

The first dealt with changing the name of the voting machine to the barn door, so that the Speaker of the House would tell the reading clerk to "open the barn door" instead of "open the machine."

The second resolution recognized that, in the constant debate over the rural-urban divide, the suburbs are always forgotten. Sure, they're a nice place to a visit if you need to go to Sam's Club, the resolution said, but otherwise are looked down on by folks from the rural or urban areas. Homes in the suburbs feature large lawns and tall fences to hide from noisy neighbors, and NextDoor is where you learn you don't know your neighbors at all, the resolution continued.

"It's universally acknowledged that mini-vans are the best mode of transportation," the resolution said, which drew a hearty "yeah" from Rep. Patrick Neville of Castle Rock, who leads the minivan caucus.

The resolution added that the state economy is bolstered through the purchase of LuluLemon and other yoga apparel by people who don't know the difference between a welcome mat and yoga mat. Living in the suburbs also means there's a soccer field and participation trophy for everyone, PTA is beer pong growing up, and paying HOA dues is as important as paying taxes, the resolution concluded.

"We spend a lot of time talking about the rural-urban divide, and while putting on my sandals with my socks the other day, I was thinking you could bridge the gap, not quite rural and not quite urban. The magical gift is already here," Gray said.

Gray added that, as the middle child to solve the problem, "When you want to bridge that divide we'll be here for you."

"You're welcome, Colorado," said Froelich, adding that, without suburbs, "we would not need any managers at all without us asking to speak to the manager."

The lighter side, usually, of what goes on at the General Assembly.