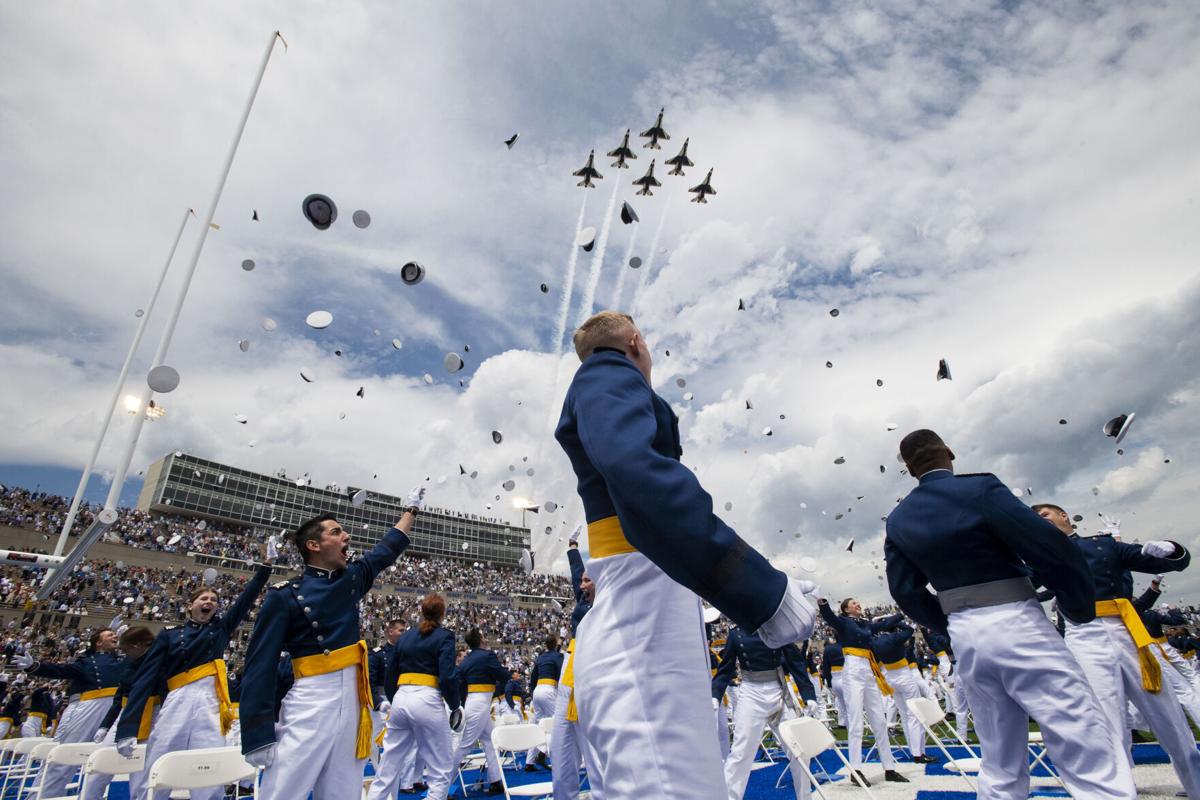 The Air Force Thunderbirds flyover during the celebratory hat toss during the United States Air Force Academy's Class of 2021 graduation ceremony at the USAFA in Colorado Springs, Colo., on Wednesday, May 26, 2021. More than 1,000 cadets celebrated becoming officers. (Chancey Bush/ The Gazette) 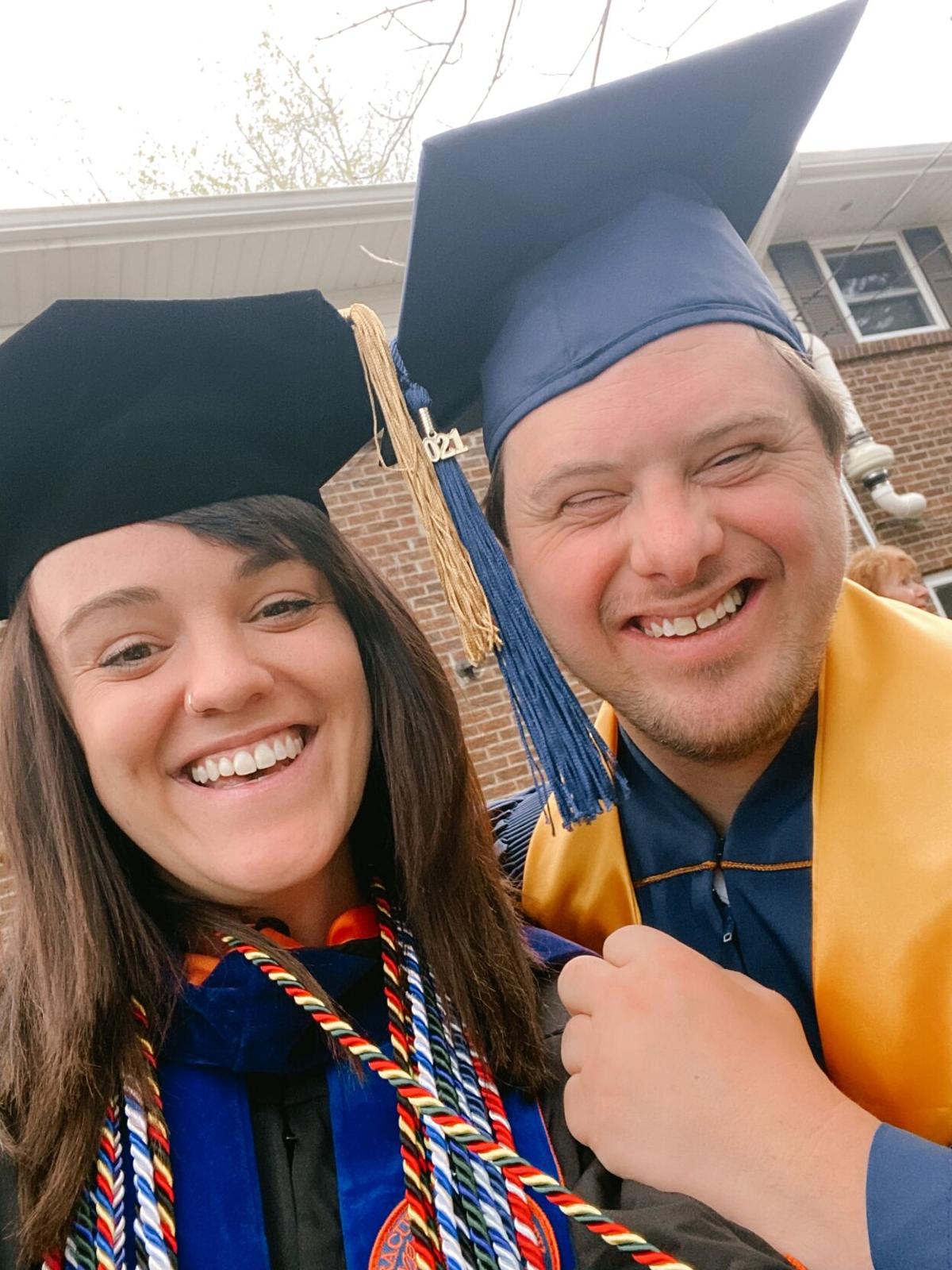 Sara Pielsticker and her cousin Brendan Balmes celebrate their graduations.

The Air Force Thunderbirds flyover during the celebratory hat toss during the United States Air Force Academy's Class of 2021 graduation ceremony at the USAFA in Colorado Springs, Colo., on Wednesday, May 26, 2021. More than 1,000 cadets celebrated becoming officers. (Chancey Bush/ The Gazette)

Sara Pielsticker and her cousin Brendan Balmes celebrate their graduations.

Few things are as promising as a sea of caps and gowns, a sign that we continue to march on even in uncertain times.

Whether it’s a high school, college — or even preschool — graduation ceremonies are inspiring.

I happened to drive by Arapahoe High School the morning of May 21 when the seniors, wearing their caps and gowns, boarded buses that would take them to their commencement at Littleton Public Schools Stadium.

I thought of Elle Woods and her graduation speech:

Who is Elle Woods? you ask. What, you mean you didn’t watch “Legally Blonde”?

Speaking of blondes, my niece graduated Thursday, May 27, from North High School in a ceremony at Infinity Park in Glendale.

The day before, the U.S. Air Force Academy held its graduation, meaning wonderful pictures of cadets throwing their caps in the air appeared online and in newspapers. (To be honest, I’ve always been a little more touched at that gesture with Navy caps in “An Officer and a Gentleman.”)

One of the most uplifting Colorado graduations this year happened in the little town of Holly. After being diagnosed with leukemia, Kristen Tefertiller underwent painful cancer treatments and spent a chunk of her time at Children’s Hospital Colorado in Aurora. The 18-year-old endured chemotherapy and a bone marrow transplant, and still managed to become valedictorian.

Tefertiller, who now is cancer free, was one of four seniors nationally selected to appear on “Graduation 2021: A CNN Special Event” that aired May 24.

During the event, Vice President Kamala Harris applauded members of the Class of 2021.

All graduations are a milestone so it’s no wonder people cry. “Pomp and Circumstance” gets me every time.

I sobbed all through my graduation in 1977 from Cottey College, an incredible two-year women’s college in a small Missouri town.

Daisies were the preferred flower, and we endlessly exchanged a greeting card designed by Susan Polis Schutz of Blue Mountain Arts. Her son, Jared Polis, would go on to become Colorado governor. The cover of the card featured a quote from e.e. cummings: “Thank heaven someone is crazy enough to give me a daisy.”

I received a book of Susan Polis Schutz’s poetry for graduation from a classmate. I always meant to have Polis autograph it, but now I’m not sure where the book is.

One of my Cottey classmates, Gigi Pielsticker, enjoyed an amazing graduation party this year. Her nephew, Brendan Balmes, was one of four students to graduate from a University of Northern Colorado program designed for people with intellectual and developmental disabilities.

Balmes has Down syndrome. He grew up alongside his cousin, Sara Pielsticker, who spent her summers working at camps that help those with developmental disabilities. The experience inspired her career choice, and last year Pielsticker graduated from Syracuse University with a law degree and a master’s in disability studies.

Because of the pandemic, Syracuse didn’t hold a graduation ceremony in 2020 but sent Sara her cap and gown this May. The cousins took a picture together dressed in their graduation garb.

Balmes’ mother, Molly, talked about the challenges her son faced, including having to remotely learn at home during the pandemic.

“It is an achievement,” she said, of her son being part of the first class of its kind to graduate from UNC.

The treatment of people with disabilities has shifted over the decades. My eldest sibling, Joe, is deaf, and when we cleaned out my parents’ basement one year we found results of tests performed when he was a toddler in the 1950s. The documents contained phrases such as "mental defective."

We looked at each in shock.

Joe retired as a shift foreman at a paper company. He’s tough to beat at Hearts or Spades or any game because of his ability to count cards. When he graduated from the South Dakota School for the Deaf in 1974, my mother wept uncontrollably. No wonder.

I was touched that former lawmaker Josh Penry invited me to a graduation party for his son, Chase, who graduates from Cherry Creek High School on June 4.

Lawmakers’ children are always such a part of the fabric of a legislative session. Josh would make the trek to Grand Junction just for the night because his son had a game and drive back late that night or early the next morning. And now and then Chase could be found in his dad’s Senate office doing homework.

The party was for Chase and three other Creek seniors who are all going on to play for Division I football teams — Chase for the University of Colorado. Creek this year won its second state football championship in a row, and the two trophies were displayed near the table for cards and gifts.

I asked Penry what people gave graduates these days. “Who knows?” he said. “Maybe Amazon cards.”

Who knows indeed. In the spring of 1987, I went on a cruise with a group of college friends; most of us had graduated around 1982. At one point we remarked on all the teenagers on board. A kid standing in line heard us and said the cruise was a high school graduation gift from his parents. Our friend Doug Young was incredulous.

“All I got was a dictionary,” he said.

“Did they have cruises back then?” the teenager innocently asked.

We still laugh about it.

“When you’re a 2020 college graduate and don’t get a ceremony you just blast this and pop open a bottle of champagne. Congrats, graduates.”