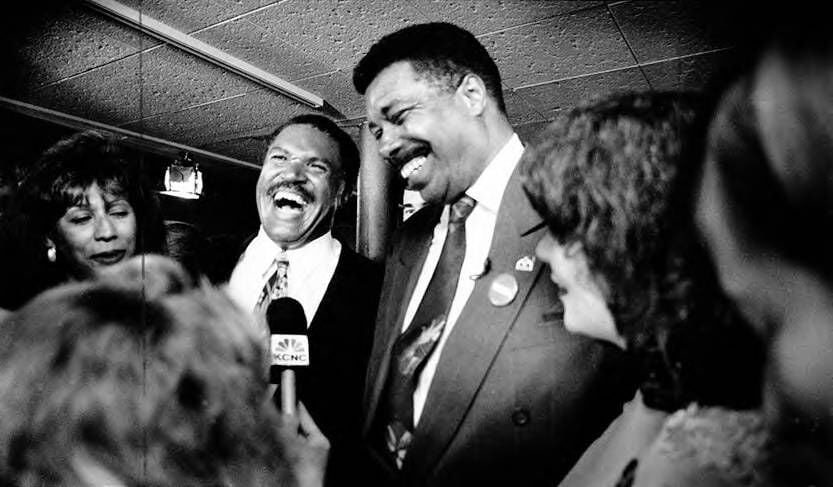 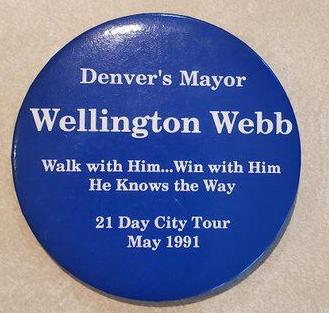 A Wellington Webb campaign button from 1991 touting his walk of the city.

Thirty years ago this month, Wellington Webb — once described as the “pit bull of underdogs’’ — won his first election as Denver mayor by beating the favored candidate in every part of the city, kicking off a 12-year stretch of defining the Mile High City for decades to come.

Webb’s legacy now looms so large it’s easy to forget that he narrowly made the runoff, with Denver District Attorney Norm Early easily taking the top spot on the ballot.

Flat-out broke, Webb’s campaign couldn’t go up on the air with TV ads, so he walked the city in his size-11 sneakers and stayed nights in supporters’ homes in order to reach voters.

The 1991 election was historic: No matter who won, Denver, once a Ku Klux Klan stronghold, was about to get its first Black mayor.

Webb’s victory catapulted him to a player in national Democratic politics.

By the time I moved to Denver in 1993, Webb had been mayor for two years and he frequently dominated the news because of problems with the new airport already under construction when he took office. Coloradans were sentimental about the current airport, Stapleton, but for no good reason other than location. Sure, it was easy to get to Stapleton but the chance of getting out should a snowflake fall was pretty dismal.

In fact, ongoing problems with Denver International Airport, particularly its baggage system and its delays in opening, were often mentioned as the main reason Webb wasn’t going to get re-elected in 1995.

Bolstered by a strong economy, Webb helped build the great city that his predecessor, Federico Peña, had imagined. A once anemic downtown bustled day and night. New neighborhoods sprang up where the old airport once stood.

“We were a cowtown before Wellington. He put us on the map,” maintained one of his biggest fans, Rep. Arie Taylor.

Webb now is 80 but his input is still sought on a variety of issues. Colorado Politics interviewed him for a story about Denver’s mayoral system and how the current occupant, Michael Hancock, is making the turn into the final two years of his third and final term.

But let’s get back to that first campaign. The late, great political columnist Charlie Roos wrote that without Peña on the ballot to excite Denver voters it felt like a snoozefest. Peña opted against seeking a third term and Webb, Early and former Republican Party chairman Don Bain were among those running to succeed him.

A political consultant had advised Webb not to run, saying polling showed he had only 7% name recognition. His wife, state Rep. Willma Webb, believed that impossible considering Webb was the current city auditor, and had served in the state legislature and in President Jimmy Carter’s administration.

Webb went with his most trusted adviser and jumped into the campaign.

“What I do recall is desperately pulling for Don Bain to edge out Wellington so that Bain would finish second in the first election,” Finegan said. “We were confident that we would win if the final round was Early-Bain, and we did not want Wellington. He was clearly gaining momentum by the day.”

The stories about Webb’s campaign are legendary. Campaign manager Mike Dino and field director Ken Smith combined strategies to come up with “The Walk,” with the Webbs walking the city and staying in supporters’ homes at night.

Webb loves to tell the story about the time he and field staffer Greg Kolomitz knocked on doors in southwest Denver. At one home, a white man wearing bib overalls saw them and slowly placed the screen door lock in its hook.

But the man then hollered for his wife to come, saying, “That colored fellow we’re going to vote for is on the porch.”

Dino usually showed up at the hosts’ homes to eat breakfast with Webb and talk about that day’s walk.

“I didn’t always appreciate how stressful it was for him to be away at night from the comfortable confines of his home and family during the course of the 42 days he walked through Denver,” Dino recalled. “It made it hard for Wellington to detach just for even a brief moment from the campaign rigors.”

One morning at a home in Washington Park, Dino took one look at Webb and knew something was wrong. The candidate was steamed over TV ads attacking his family.

“This is war,” Webb announced.

Other moments were more light-hearted. One day campaign volunteer Elbra Wedgeworth drove to meet Webb and his team and handed him a bag.

Inside was the underwear he had forgotten when he stayed at City Council President Cathy Donahue’s house for the night. (By the way, the councilwoman washed his drawers before returning them.)

Webb’s coffers were so bare that at events featuring other candidates, staffers carried plastic toy cell phones and talked into them. They didn’t want the other candidates to think they couldn’t afford phones.

Walking the city and refusing to campaign by car got Webb publicity.

So did his performance in the debates. Webb didn’t cram beforehand, figuring he would be able to handle most questions about the city. Instead, he rested.

Kevin Flynn, now a Denver city councilman, wrote the other Wellington’s victory story for the Rocky:

“Wellington Webb, the pit bull of underdogs, won an overwhelming victory by running a hand-to-mouth campaign that captured the hearts of Denver voters … .

“Webb put together an odd coalition of estranged liberals, conservative Republicans, Don Bain supporters and remnants of former Mayor Bill McNichols' coterie, many of whom have felt left out of Mayor Federico Peña’s city hall.”

Early could not be reached for comment, but his campaign manager has nothing but good things to say about Webb.

“Wellington was an excellent mayor, and Denver certainly has prospered since then,” Finegan said.

Early stepped down as district attorney, and Webb gave him a plum appointment, serving on the board dealing with the construction of a new football stadium. “Norm got to see all the Broncos games,” Webb recalled, with a laugh.

Webb looks back at 1991 fondly. So do plenty of Denverites.

STATE OF THE CITY | Denver Mayor Michael Hancock delivers his 11th address, unlike others

Denver Mayor Michael Hancock delivered his 11th State of the City address Monday morning, but in many ways it was like none other as the nation stands a step back from the precipice of the pandemic.

Cole Finegan nominated to serve as U.S. attorney in Colorado

Cole Finegan, the former Denver city attorney and chief of staff to former Denver Mayor John Hickenlooper, is on a list of nine candidates for U.S. attorney.