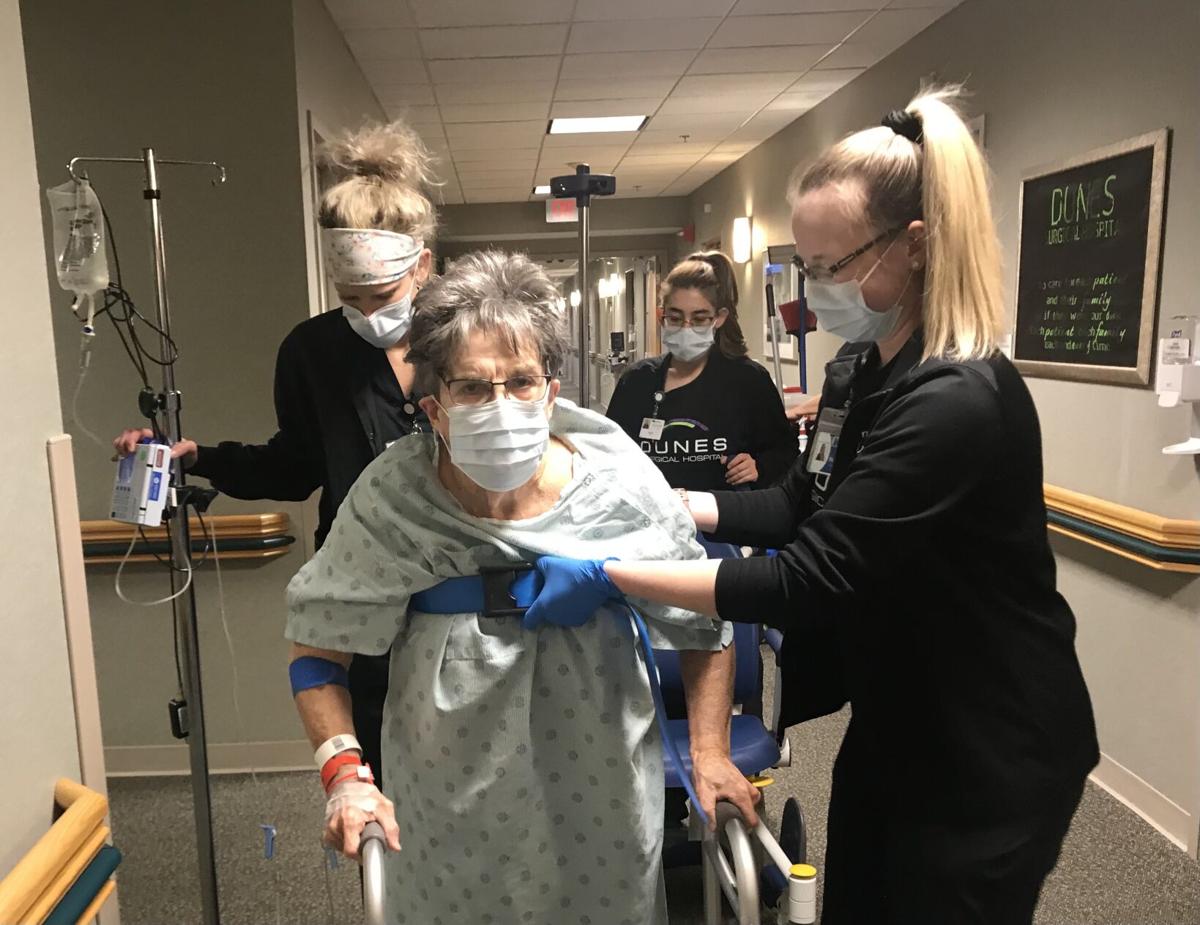 The staff at Dunes Surgical Hospital in South Dakota walks Mary Bartels down the hallway after her operation on her back. 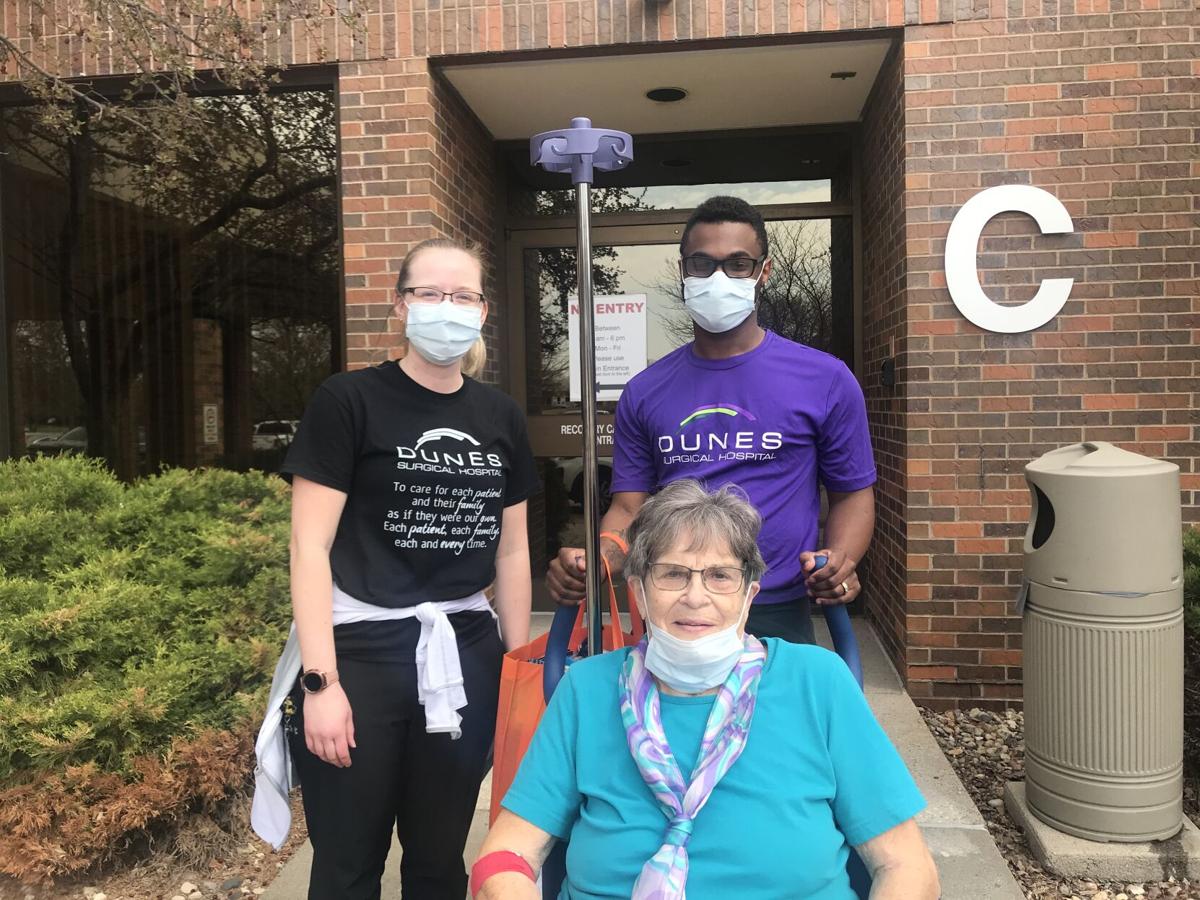 Dunes staffers wheel Mary Bartels out of the Dunes Surgical Center one week after back surgery on March 30, 2021. She then transferred to a “swingbed” in Vermillion, S.D., for a week.

The staff at Dunes Surgical Hospital in South Dakota walks Mary Bartels down the hallway after her operation on her back.

Dunes staffers wheel Mary Bartels out of the Dunes Surgical Center one week after back surgery on March 30, 2021. She then transferred to a “swingbed” in Vermillion, S.D., for a week.

Talk about full circle. I’m going to get my second vaccination today, April 20, at the same South Dakota hospital where I was born almost 64 years ago.

Moderna II, here I come, although the date threw me. April 20 will always bring back memories of the Columbine High School massacre.

Dakota Hospital is where eight of my parents’ nine kids were born. When Baby No. 8 arrived on Easter in 1966, Dad gathered us on the lawn and we waved up to Mom, who was holding Caroline in her arms.

I got my appendix and tonsils removed and two broken arms set at this hospital. When a pickup truck door closed on my hand, I lost the edge of my finger and went through two grafting experiments before I treated myself with a bandage and duct tape for an entire year.

When my sister’s eye was shot out ala “A Christmas Story,” she was rushed to the next town, but my other siblings were frequent flyers at Dakota Hospital, too, getting treated for a variety of ailments, from a dog bite, to two broken collarbones.

And it’s the same hospital where my mom was transferred on April 7 after back surgery on March 30. Quite frankly, we thought she was nuts to go under the knife at the age of 87, but she said if it could relieve the chronic pain she had suffered for years it was worth it.

I came to South Dakota to help out, which is why I needed to get my second vaccination shot out of state. I got my first one March 20 at a Kaiser Permanente clinic in Denver.

So while the Colorado Legislature is debating the hotly contested public option bill dealing with health-insurance premiums, I’m dealing with another type of medical situation. It has been both eye-opening and somewhat embarrassing. When the medical team talked about transferring Mom to a swing bed, I objected. She can barely get out of a bed, let alone a hammock.

I can never keep Medicare and Medicaid straight, despite covering them for years, and Mom had to correct me several times. Medicaid provides health care for, among others, eligible low-income adults, children, pregnant women, elderly adults and people with disabilities. Medicare is a national health insurance program that began in 1966 under the Social Security Administration, and is available for Americans 65 and older.

It is not as simple as that sounds, and a surf of the internet just adds to the confusion. “To understand Medicare, you need to know about the four ‘parts’ of coverage that are available to you. Each of these parts covers different types of health services.” I read through it several times and was equally confused each time.

Medicare is paying for my mom’s surgery, at least that’s what I understood while listening to various folks read her medical documents to her. The description of her surgery made me wince:

“LUMBAR, 2,3,4,5 Decompression Laminectomy: Removal of one or more of the posterior bony arches of the vertebrae.

“Instrumentation: Insertion of metal screws, metal rods, and/or metal plates along spine to strengthen and stabilize the spine. Fusion: Placement of bone graft between bony arches of the vertebrae to prevent motion and strengthen the spine.”

(Is it just me or do you also hear the word “bony” and think of Melanie Griffith and Harrison Ford dissing Sigourney Weaver in “Working Girl”?)

My buddy Rick Enstrom, who underwent a similar kind of surgery, assured me that my mom will feel much better.

The doctor told me the same thing after the two-hour procedure. For some reason, Mom took this to believe she would be able to water ski by the weekend and was surprised when she endured some tough days. She loved the meds, though, and asked me the first night whether I also saw the cats crawling on the ceiling.

I was not meant to be a caregiver. Mom asked for ice chips for her parched throat, but the size of the spoonful was so big she said it looked like an igloo headed to her mouth and so at the last minute she flinched. All those chips went down her neck.

Mom initially called me Nurse Ratchet but we later believed I was more like the bumbling Tim Conway on “The Carol Burnett Show.” I tripped over Mom or dropped things on her or couldn’t find her phone cord -- when it was plugged into the wall.

The care team at Dunes Surgical Center was so good they came running every time they heard a scream, including the time Mom asked if I would wipe her. I know she changed my diapers, but that’s not the kind of full circle I can navigate, although I have such admiration for family members who can.

I went online and ordered Mom what I call a “pooper scooper,” a medical device that helps her reach around and take care of the dirty jobs. I’m sure it will be the best $30 I’ve ever spent.

By the time Mom transferred from the surgical center to our local hospital in Vermillion, now officially called Sanford, I knew what a swing bed was. The hospital is paid a lower rate because when you use “swing beds” you get a different level of care. Medicare pays for that too, up to a point. Luckily, Mom was ready to go home before we reached that point.

Never have we been so grateful that she lives in a first-floor apartment without a single set of steps to maneuver.

She assured her doctor that her daughter from Denver would be staying with her for a few weeks. Denver! At that, her doctor perked up. It turns out Charles Yelverton grew up in Northglenn. He worked at the Northglenn Mall at one point, and his dad worked at Joslins department store in downtown Denver. Such a small world.

I’m not sure how much Mom’s bill from Medicare will be. She has a supplemental policy, but who knows if that will be enough to cover the costs.

I’ll be eligible for Medicare in a year, which still is a shock. That’s because I only recently discovered that I have been lying about my age. Somewhere, sometime in this godforsaken pandemic I lost a year and kept insisting I was 62. I discovered my error during a phone call with a friend about how long I would be in South Dakota.

“Well,” I said, “My sister Mary Kay turns 64 in mid April so I will stay through to help her celebrate.”

“65!” my sister and her husband immediately corrected me.

Impossible, I said, I’m going to be 63 in May and I’m only a year younger than you. Then I did the math, a subject that has vexed me for as long as I can recall. I got a 13 in the math portion of my ACT. Ask my former Rocky Mountain News colleagues Kevin Vaughan and Mike Littwin about my math skills.

So I’m about to turn 64, which means I’m 13 months away from being eligible for Medicare -- if I’m still around. Here’s hoping my vaccination does its job.