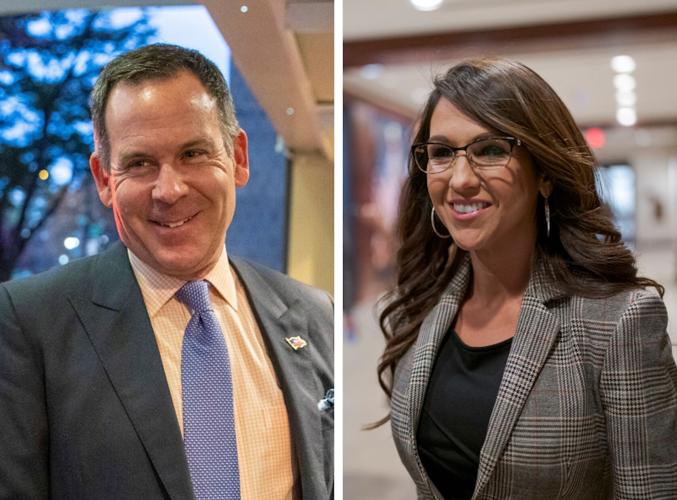 Democratic challenger Adam Frisch, left, and Republican U.S. Rep. Lauren Boebert, the incumbent in Colorado's 3rd Congressional District, are facing off in a race that was too close to call on Wednesday, Nov. 16, 2022, as the deadline for military, overseas and cured ballots approached.

Democratic challenger Adam Frisch, left, and Republican U.S. Rep. Lauren Boebert, the incumbent in Colorado's 3rd Congressional District, are facing off in a race that was too close to call on Wednesday, Nov. 16, 2022, as the deadline for military, overseas and cured ballots approached.

The Colorado Secretary of State’s Office on Wednesday ordered a mandatory recount of the results in the race for Colorado’s 3rd Congressional District between U.S. Rep. Lauren Boebert and Democrat Adam Frisch.

Under Colorado law, a recount is mandatory if the margin between the two top-finishers is 0.5% or less of the leading candidate's vote total.

The office said all the 27 counties within the congressional district have been notified to begin preparations for the recount, which, by statute, must be completed by Dec. 13.

“The results of the District 3 race reinforce the fact that every vote matters,” Secretary of State Jena Griswold said in a statement. “Colorado voters have made their voices heard, and I am ordering this recount in accordance with Colorado law to confirm the will of the voters.”

Frisch already formally conceded defeat to Boebert. He earlier said he supports the process but doesn't want to "raise false hope" by continuing with his challenge.

"We believe in the integrity of elections in our great state of Colorado and are supportive of this recount to ensure continued faith and the security of our elections," Frisch said. "However, the likelihood of this recount changing more than a handful of votes is very small — very, very small. It would be disingenuous and unethical for us or any other group to continue to raise false hope and encourage fundraising for a recount."

Added Frisch: "Colorado elections are safe, accurate and secure. Please save your money for your groceries, your rent, your children and for other important causes and organizations. I just got off the phone with Representative Boebert. I called her to formally concede this election."

Boebert said on Twitter shortly after Frisch spoke that she had heard from her opponent and was enthused about working with the incoming GOP majority in the House.

"Adam Frisch called me to concede this race," she tweeted. "I look forward to getting past election season and focusing on conservative governance in the House majority. Time to get to work!"

The close race in the Republican-leaning district — according to the New York Times, it was the closest congressional contest in the country this cycle — took nearly everyone by surprise.

Boebert, the former owner of a gun-themed restaurant and one of former President Trump's most vocal supporters, easily won the seat last cycle after upsetting a five-term GOP incumbent in the primary.

Following redistricting, the largely rural 3rd CD shifted further to the right, with Republican candidates favored by about 9 percentage points, according to a nonpartisan analysis of its electorate's voting history.

The district covers 27 counties on the Western Slope and across Southern Colorado, including Pueblo County and the San Luis Valley.

After emerging from a three-way Democratic primary with a narrow win, Frisch, a former member of the Aspen City Council, ran as a centrist in a bid to win over independent voters and Republicans disillusioned with Boebert's combative approach, which he derided as "angertainment."

"We decided to run for Congress because we saw the needs of the district being ignored," Frisch earlier said. "We have shown the country that extremists politicians can be defeated, loud voices are not invincible, and shouting will not solve problems. We do not have to let hate win, but we can come together and talk about issues that are important to our individual lives and our communities."

Frisch said he believes his campaign's performance demonstrates that voters are ready to discard the divisive, overly partisan brand of politics practiced by his opponent.

Boebert survived a primary challenge from a conservative state lawmaker who made many of the same arguments, defeating state Sen. Don Coram, a Montrose rancher, by a roughly two-to-one margin. Coram later endorsed Frisch in the general election.

While Frisch released an internal poll in early October that showed the race in a statistical dead heat, national election forecasters rated the seat as solidly Republican, and national party organizations declined to spend money supporting either candidate.

The political establishment was stunned on Election Night when early returns showed Frisch with a lead, which he maintained until two days after the election as counting continued. But Boebert pulled ahead and held onto a slim lead.

The recount is unlikely to fundamentally alter the outcome.

Frisch acknowledged as much.

“While an automatic recount is on the horizon, we don’t expect the outcome to change," he said. "Historically, recounts in the state don’t change the results by more than a dozen votes because Colorado is the gold standard when it comes to elections."

This summer, Colorado conducted a statewide recount in the Republican primary for secretary of state after the second-place finisher requested one.

Tina Peters, the embattled former Mesa County clerk who trailed first-place finisher Pam Anderson by more than 70,000 votes, or 14 percentage points, paid for the recount, since the margin was far outside what would have triggered an automatic, state-funded recount.