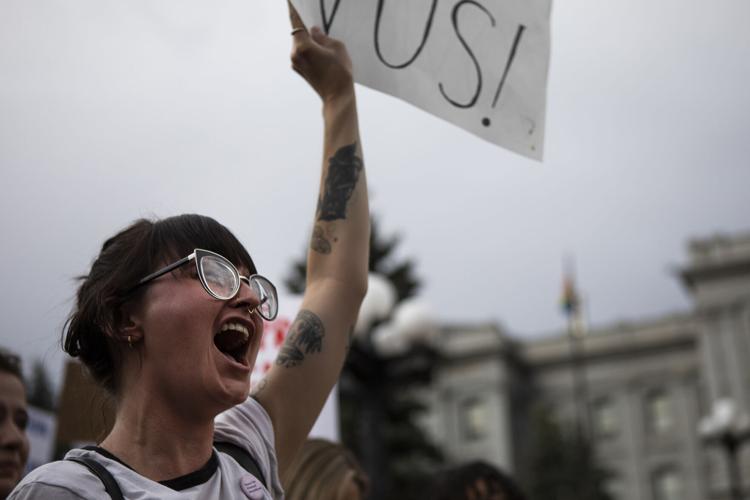 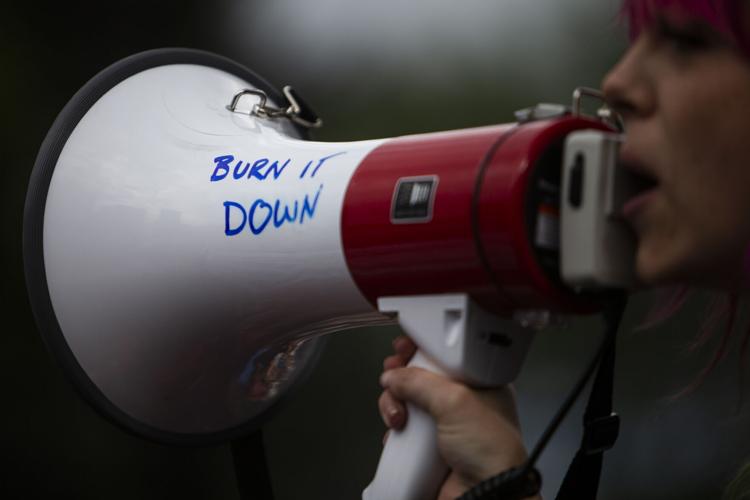 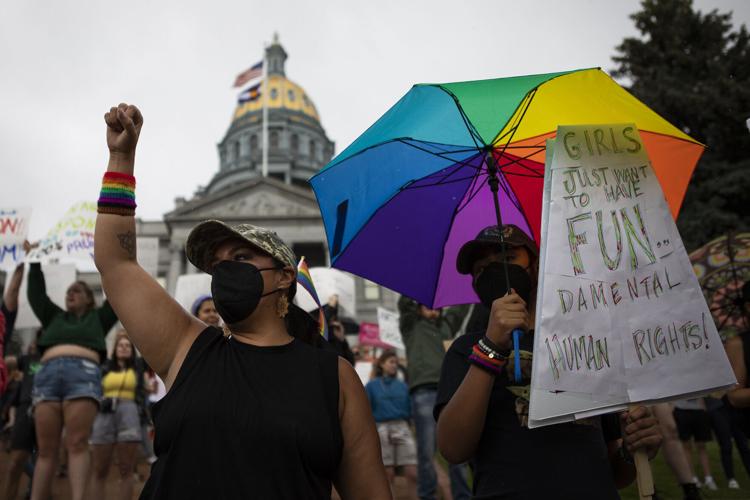 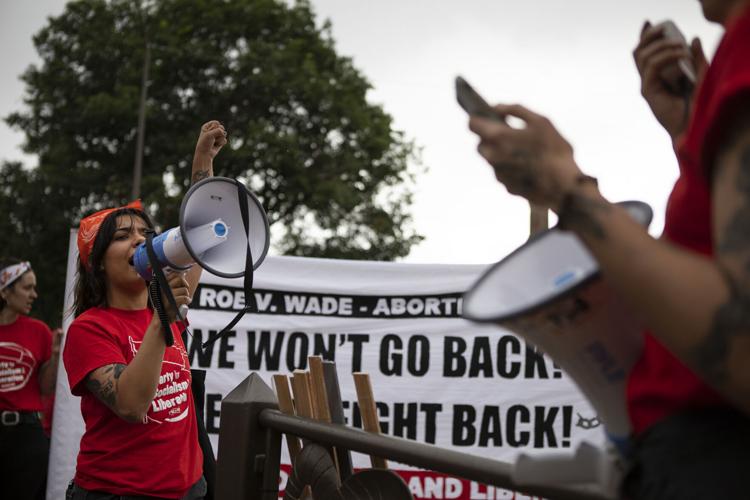 Organizers with the Party for Socialism and Liberation leads chants during an abortion rights protest outside the Colorado state Capitol building in reaction to the U.S. Supreme Court overturning Roe v. Wade on Friday, June 24, 2022, in Denver, Colo. (Timothy Hurst/The Denver Gazette) 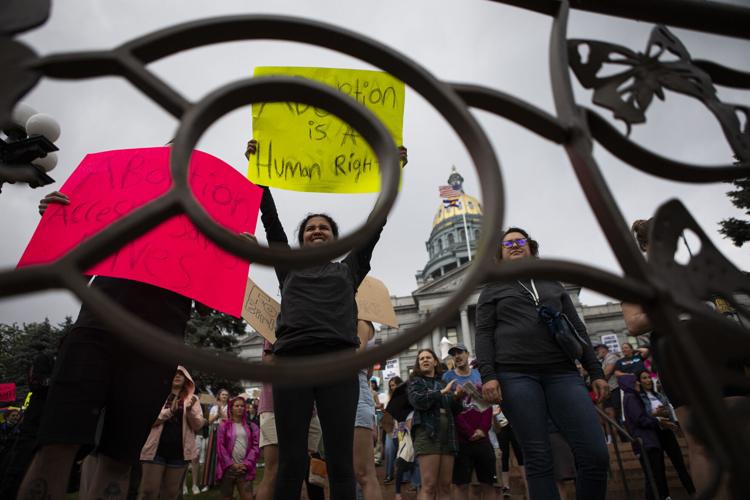 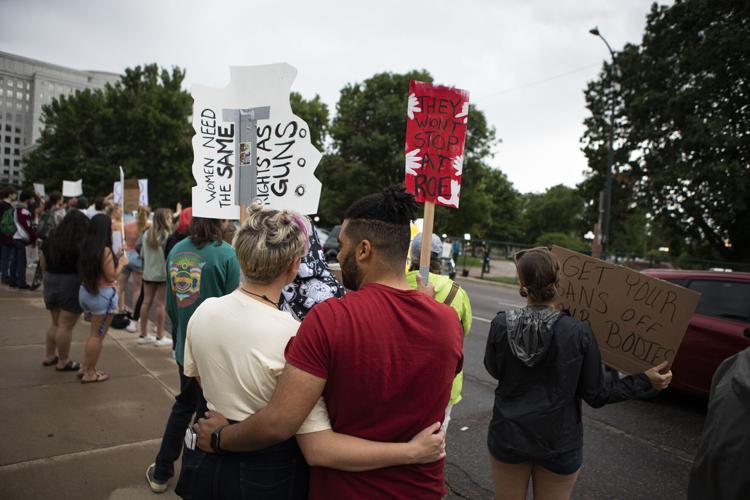 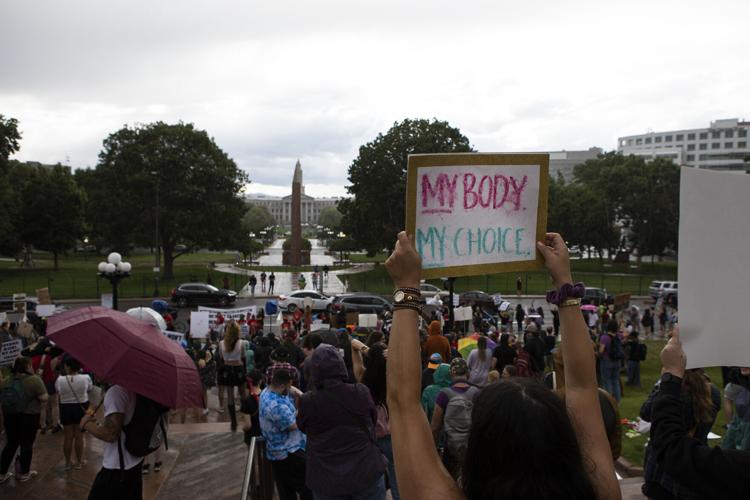 Rain causes the ink on a sign to run during an abortion rights protest outside the Colorado State Capitol Building in reaction to the U.S. Supreme Court overturning Roe v. Wade on Friday, June 24, 2022, in Denver, Colo. (Timothy Hurst/The Denver Gazette) 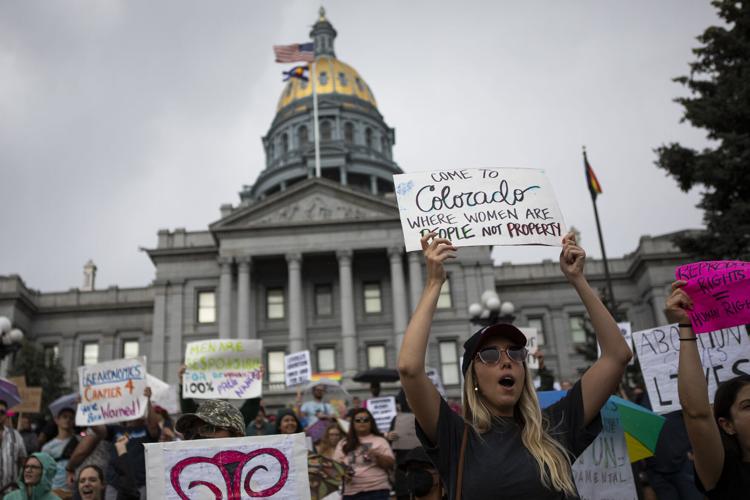 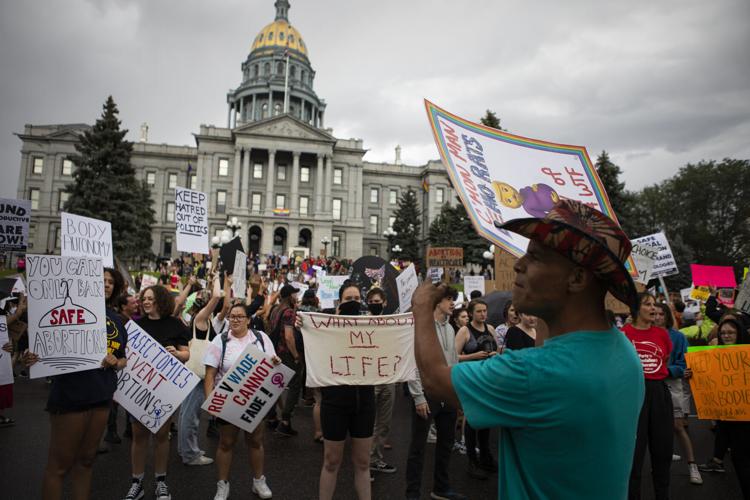 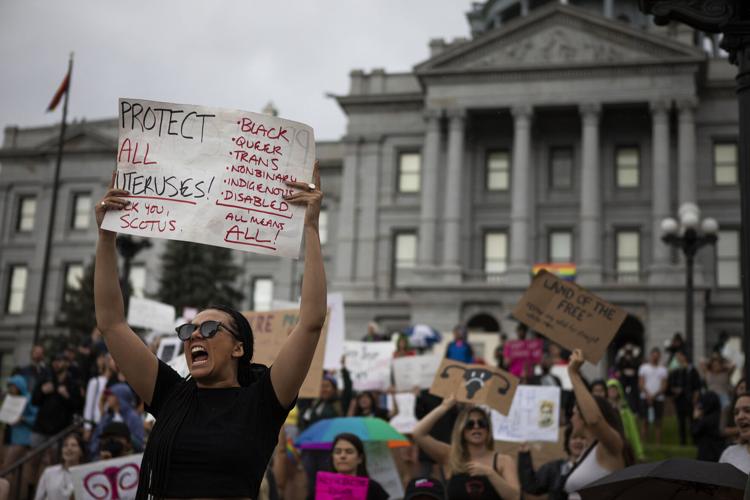 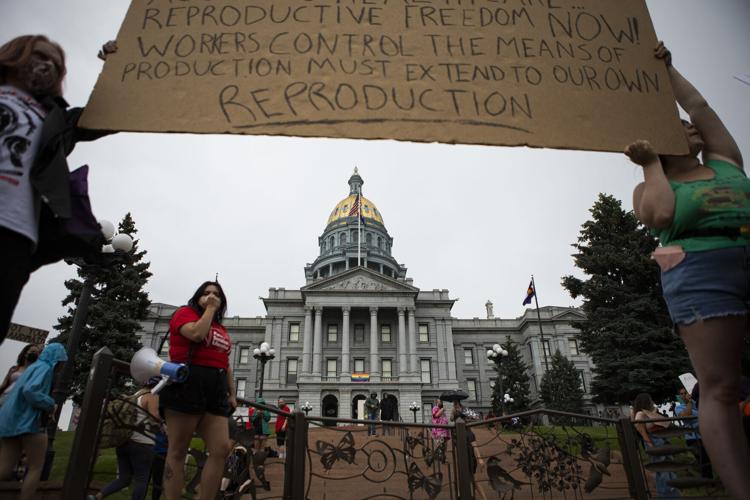 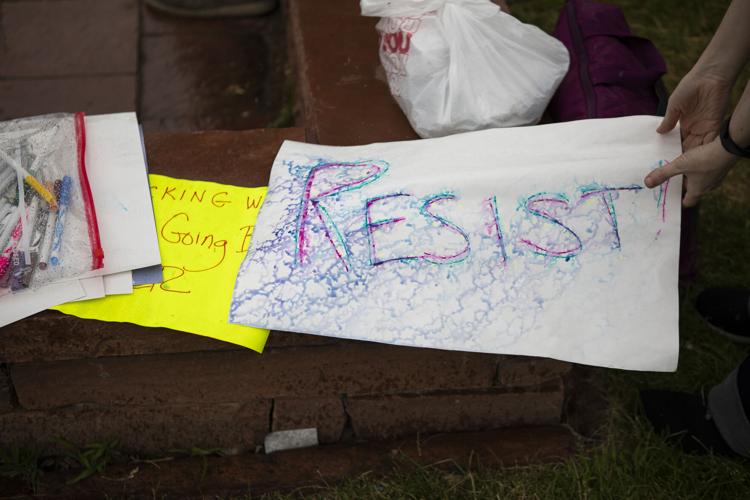 Rain causes the ink of a sign to run during an abortion rights protest outside the Colorado State Capitol Building in reaction to the U.S. Supreme Court overturning Roe v. Wade on Friday, June 24, 2022, in Denver, Colo. (Timothy Hurst/The Denver Gazette) 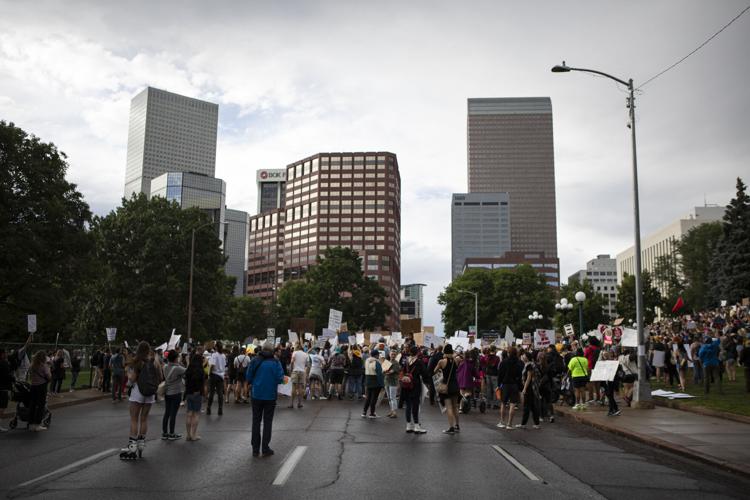 Organizers with the Party for Socialism and Liberation leads chants during an abortion rights protest outside the Colorado state Capitol building in reaction to the U.S. Supreme Court overturning Roe v. Wade on Friday, June 24, 2022, in Denver, Colo. (Timothy Hurst/The Denver Gazette)

Rain causes the ink on a sign to run during an abortion rights protest outside the Colorado State Capitol Building in reaction to the U.S. Supreme Court overturning Roe v. Wade on Friday, June 24, 2022, in Denver, Colo. (Timothy Hurst/The Denver Gazette)

Rain causes the ink of a sign to run during an abortion rights protest outside the Colorado State Capitol Building in reaction to the U.S. Supreme Court overturning Roe v. Wade on Friday, June 24, 2022, in Denver, Colo. (Timothy Hurst/The Denver Gazette)

Thousands of abortion-rights protesters marched into downtown Denver after converging at the state Capitol hours after the U.S. Supreme Court struck down two landmark decisions that gave women the legal ability to obtain an abortion.

"We won't go back. We will fight back," the protesters chanted.

The march and rallies have been peaceful and loud amidst periods of heavy rain. At the state Capitol, the crossing arms on the grounds were removed in favor of heavy metal barricades, but the police presence was minimal at best.

Initially, several different groups had planned to hold rallies at the state Capitol at same time, but they appeared to have merged into one, led mostly by the Denver branch of Party for Socialism & Liberation.

The crowd is primarily made up of women, many of them young – individuals who grew only knowing that abortion is legal nationwide. They carried signs saying only legal and safe abortions have been banned as a result of the court's decision.

Legislators a few months ago passed a law that enshrined abortion rights in the statutes, which means the court's decision –relegating the authority to define the parameters of abortion to the states – does not fundamentally change the status quo in Colorado.

"I know I should be angry but I feel so despaired. It's the first step backwards," she added, tears streaming down her face. "It's just sadness."

Robertson said she grew up in a place where – although it was before Roe – women had the choice to legally obtain an abortion. She's been fighting for that right since. She said she has been an abortion clinic escort in Pennsylvania. She also had an abortion in California, where she said it was safe. Her daughters and granddaughters attended Friday's rally with her.

Trista of Lakewood, who didn't give a last name, showed up in a costume from The Handmaid's Tale. She said she bought the costume several years ago but didn't think she'd need to wear it.

Many of the protesters were from the The League of Women Voters, which is holding its national convention in Denver this week. They adopted a resolution Friday saying the group "supports the rights of women and those who can become pregnant to self-determination related to, and including, but not limited to bodily autonomy, privacy, reproductive health, and lifestyle choice." The resolution was adopted on an 872 to 4 vote.

After about 90 minutes of chanting and brief remarks, the protesters marched up Lincoln St., turned on 16th St., and headed into downtown Denver.

The ruling expectedly reaffirmed the ideological lines that has divided the country since the U.S. Supreme Court adopted Roe in 1973. There was dismay and palpable anger on one side; ebullience and thankfulness on the other.

"Life wins," Jim Daly, President of Focus on the Family, wrote. "After nearly a half-century and over 60 million deaths, the horrifying and tragic ruling of Roe has finally been overturned ... This is a day to give thanks to God. It’s also a day to give thanks to the tens of millions who have marched in the snow and cold on the anniversary of Roe these last fifty years as faithful witnesses to the value of human life. It’s a day, as well, to give thanks to those who have committed their lives and their resources to serving mothers and protecting innocent children."

“By disregarding fifty years of legal precedent, the U.S. Supreme Court has effectively stripped away from 36 million women the freedom to control their own bodies and have handed that power, instead, to the politicians in their states," they said. "Every situation and pregnancy is different, and everyone deserves the power and freedom to make their own decisions about their health, lives and future. Yet now, as a result of today’s decision, women in nearly half of the states across the U.S. face a terrifying legal landscape when trying to access the abortion care they need – one that will undoubtedly put the health and economic futures of millions of women at risk.

In its opinion, the court's majority said the U.S. Constitution "does not confer a right to abortion" and "the authority to regulate abortion is returned to the people and their elected representatives."

In discarding Roe and Casey, the court said it reviewed the standard in cases used used to determine whether the Fourteenth Amendment’s reference to “liberty” protects a particular right, and whether the right to get an abortion is "rooted in the nation’s history and tradition and whether it is an essential component of 'ordered liberty.'"

The court also said what distinguishes the abortion right from the rights recognized in cases that Roe and Casey rely is something both decisions acknowledged – abortion is different because "it destroys what Roe termed 'potential life' and what the law challenged in this case calls an 'unborn human being.'"

"None of the other decisions cited by Roe and Casey involved the critical moral question posed by abortion," the court said.

Colorado's law, the Reproductive Health Equity Act, recognizes a fundamental right to continue a pregnancy and give birth, or to have an abortion. Fertilized eggs, embryos and fetuses do not have independent rights under the law, and it prohibits state and local public entities from denying or restricting a person's right to use or refuse contraception, or to either continue a pregnancy or have an abortion.

Abortion-rights advocates pushed the measure before a draft U.S. Supreme Court opinion showing that five Republican-appointed justices were poised to overturn Roe was leaked to POLITICO, arguing it would serve as a bulwark against any decision by the conservative court.

Unsurprisingly, Catholic bishops are targeting Colorado's new abortion law, which is among the most permissive statutes in the country.