A PDF of the Blue Book's short summary is here. Read the entire Blue Book here. 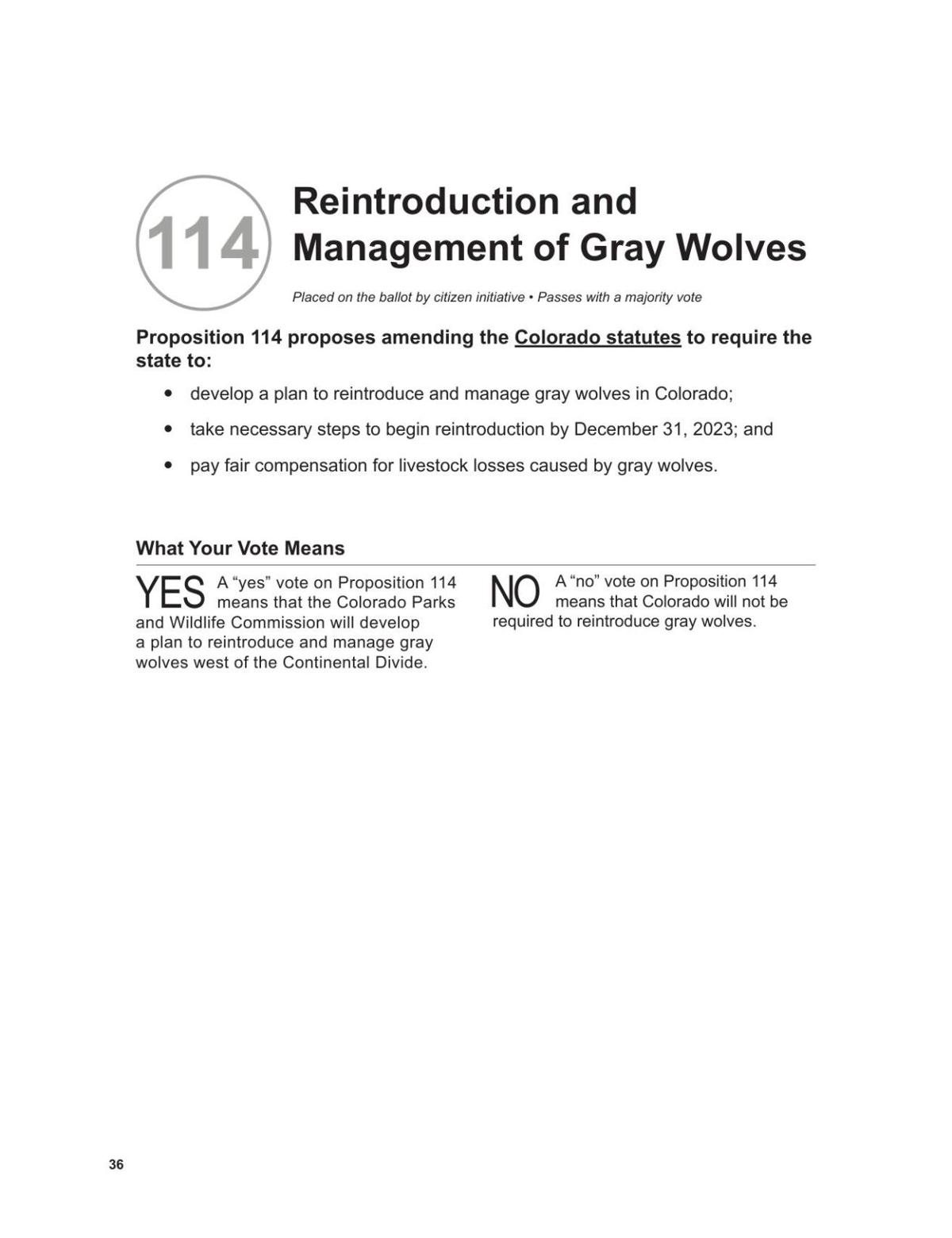 Gray wolves were hunted out of existence across the West by the 1940s, when they disappeared from Colorado.

Now state and national environmental causers are driving Proposition 114 to reintroduce the wild canines to the Western Slope, hopeful that Colorado's liberal voters on the Front Range will agree, even if many of the cities ban pit bulls in their neighborhoods.

They contend that restoring wolves to the wild will allow them to gobble up the overpopulation of deer and elk, who congregate in streams, gobble up vegetation and stir up silt. Wolves would move them on, and take out the sick and elderly in the herd.

Colorado, with its lean to the left in recent elections, is critical to the spread of the wolf across the West. Republican leaders in Utah have made clear they don't want the canines in their backyard, even passing a resolution in opposition to Colorado's efforts last spring.

Eleven Mexican gray wolves were reintroduced in Arizona and New Mexico in 1998, but the Center for Biodiversity estimates there are only 163 wolves surviving in the wild there as of last year, according the U.S. Fish and Wildlife Service.

Rob Edward, a volunteer who is president of the Rocky Mountain Wolf Action Fund, the group behind the ballot issue, said the vote is coming at a time of societal change.

“This new decade is already shaping up to be one where longstanding wrongs are redressed," he said. "Those who came before us felt righteous in their war against wolves. We are here today to say that such oppression has no place in America.”

He said the public, more than ever, is mindful of science.

“Science tells us that wolves are important," he said. "Science also tells us that it is possible for working ranches to coexist with wolves as part of the landscape. Science tells us that returning wolves can help restore balance to Colorado’s wild places. Colorado is excited to show the rest of the West what it looks like to welcome wolves home with open arms. Future generations expect us to get this right.”

Wolves are still an endangered species, though the question is under litigation, so killing one will be a big deal by the time state and federal penalties add up. In Minnesota, for instance, home to a healthy-sized population of wolves, killing one for any reason other than self-defense can net up to six months in jail and fines up to $25,000.

Opposition is led by farmers, ranchers and rural county commissions, who note the state wildlife commission has voted down the reintroduction in the past for good reason.

"The proposal to introduce wolves in Colorado might sound nice, but it doesn't stand up to the least bit of scrutiny," said Shawn Martini, vice president of advocacy for the Colorado Farm Bureau. "Only in a crazy year like 2020 would voters be asked to spend millions of dollars to forcibly introduce a species that is already here. Parks and Wildlife receives more than 100 reports of wolf sightings a year.

"Now officers have confirmed a pack of wolves in Colorado, and they are now having pups! Moreover, wildlife biologists at Colorado Parks and Wildlife and the U.S. Fish and Wildlife Service don't support forcing wolves into Colorado and have declined to do so four times in the past. Amid a global pandemic and economic ruin, let's work on getting back to normal, not spending scarce taxpayer dollars trying to do what nature has already done itself and against the advice of our wildlife professionals."

This past session, however, state Sen. Kerry Donovan, a Democrat from Vail, proposed legislation that would stall reintroduction until 2025, until it could be determined if existing wolves in the state could constitute a viable, permanent population and the state has a better handle on how much taxpayers could be on the hook for.

The wolves appear to have the public in its pack.

Joey Bunch: "This November Coloradans will decide a simple question on a complicated issue. Things have changed quite a lot since they were hunted into extinction in Colorado, like most places, 80 years ago."

El Paso County commissioners voted unanimously Wednesday to join a list of dozens of counties and oppose a ballot measure to reintroduce the gray wolf to Colorado.

Defenders of Wildlife planning program about living among predators

Defenders of Wildlife is putting the management before the wolves, announcing this week it's expanding its Working Circle Initiative to Colorado.

The guy who sang "Cat Scratch Fever" is asking Coloradans to scratch in the "No" oval on their ballot about wolves.

"That's a state initiative and it didn't factor in our delisting action," said Gary Frasier, the assistant director for endangered species for the U.S. Fish and Wildlife Service, "so we did not consider how it might be affected by our action."

The Colorado Department of Public Health and Environment designated 170 companies as achieving outstanding environmental responsibility and stewardship through a 22-year-old certification program.