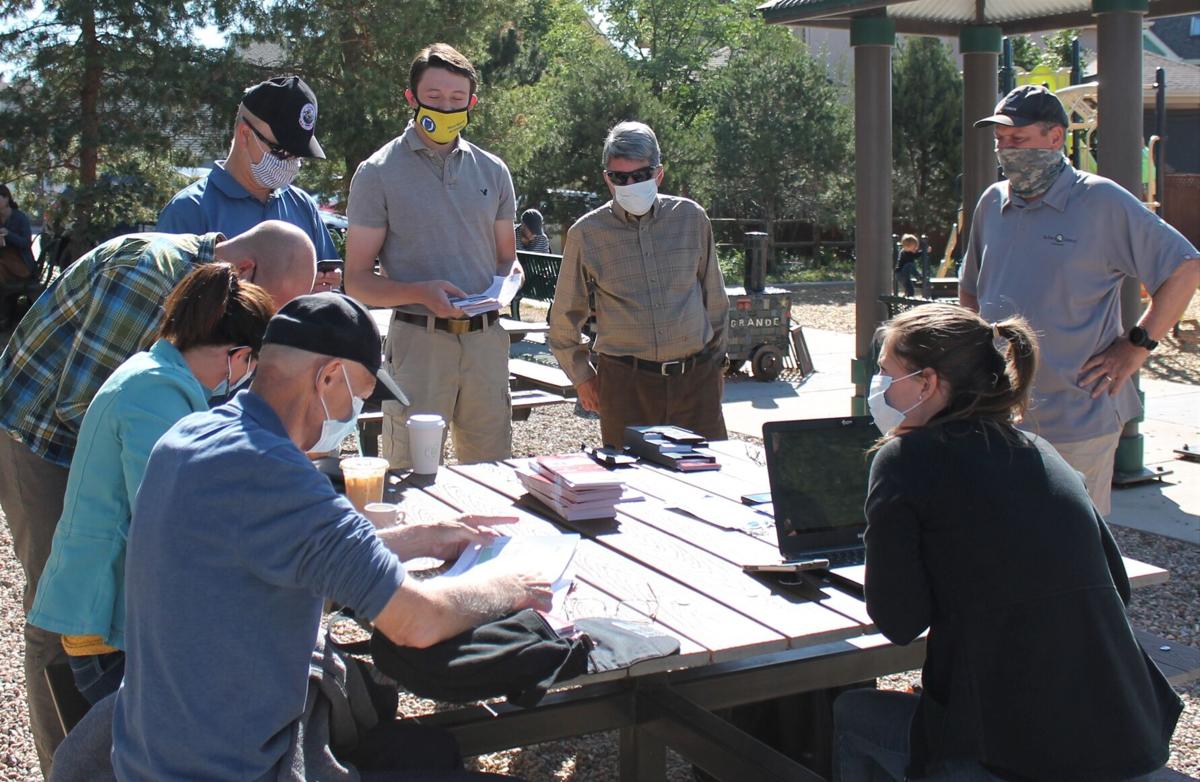 El Paso County Commissioner Stan VanderWerf, far right, works with volunteers with his campaign for reelection at the Good Neighbors Meeting House in September. The group planned to knock on doors and talk with voters later in the afternoon. 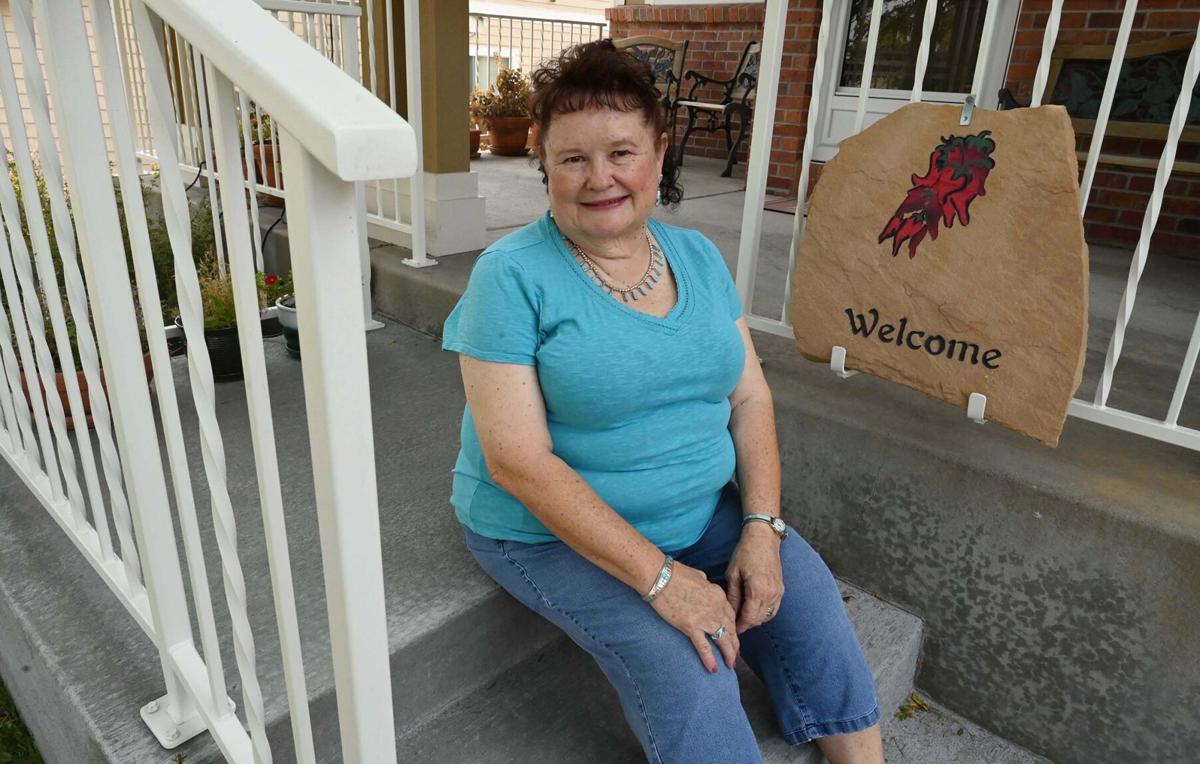 Candi Boyer, a local Republican, is working to reelect Donald Trump partially because of his position on public safety and support for the military. 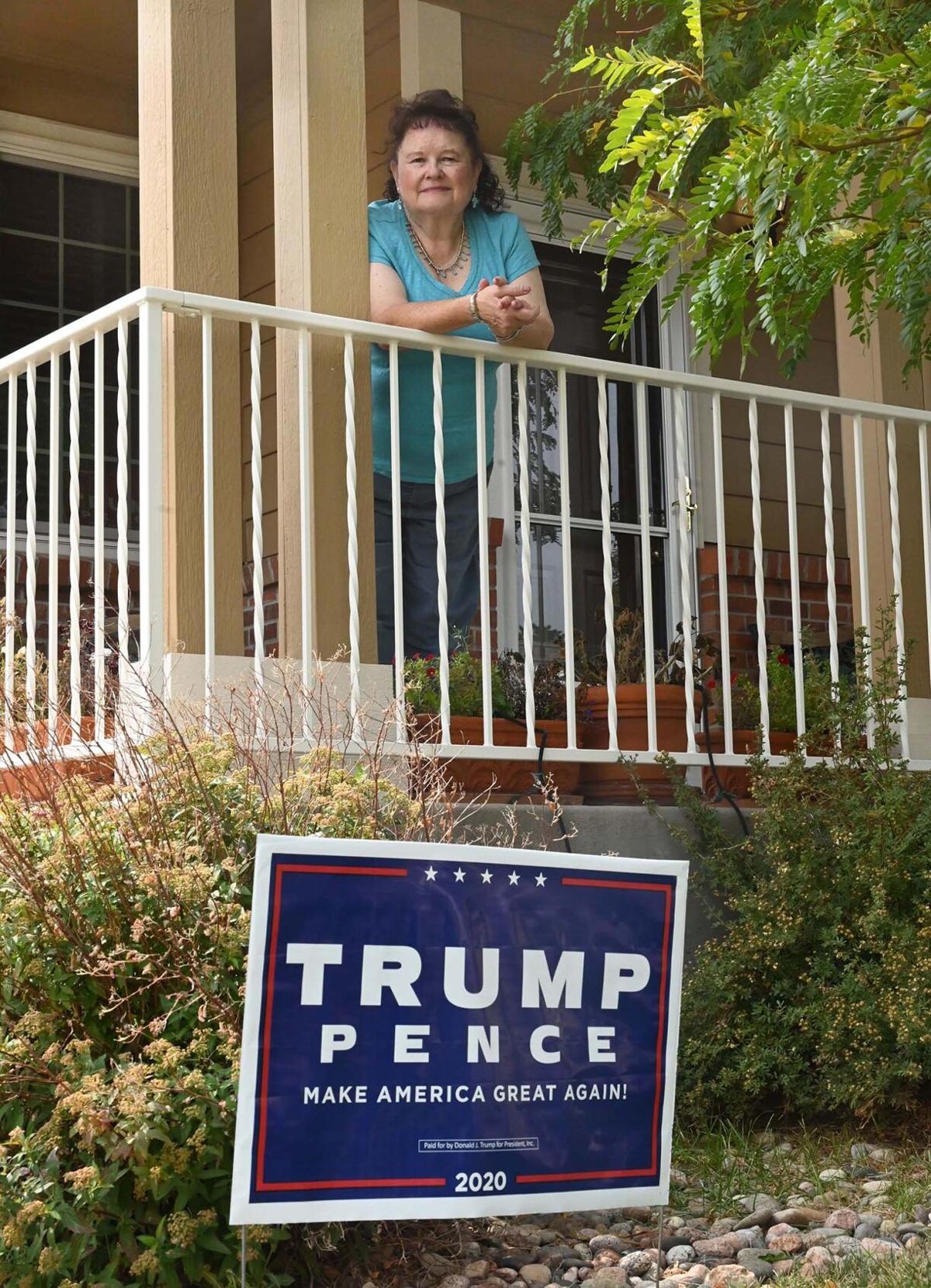 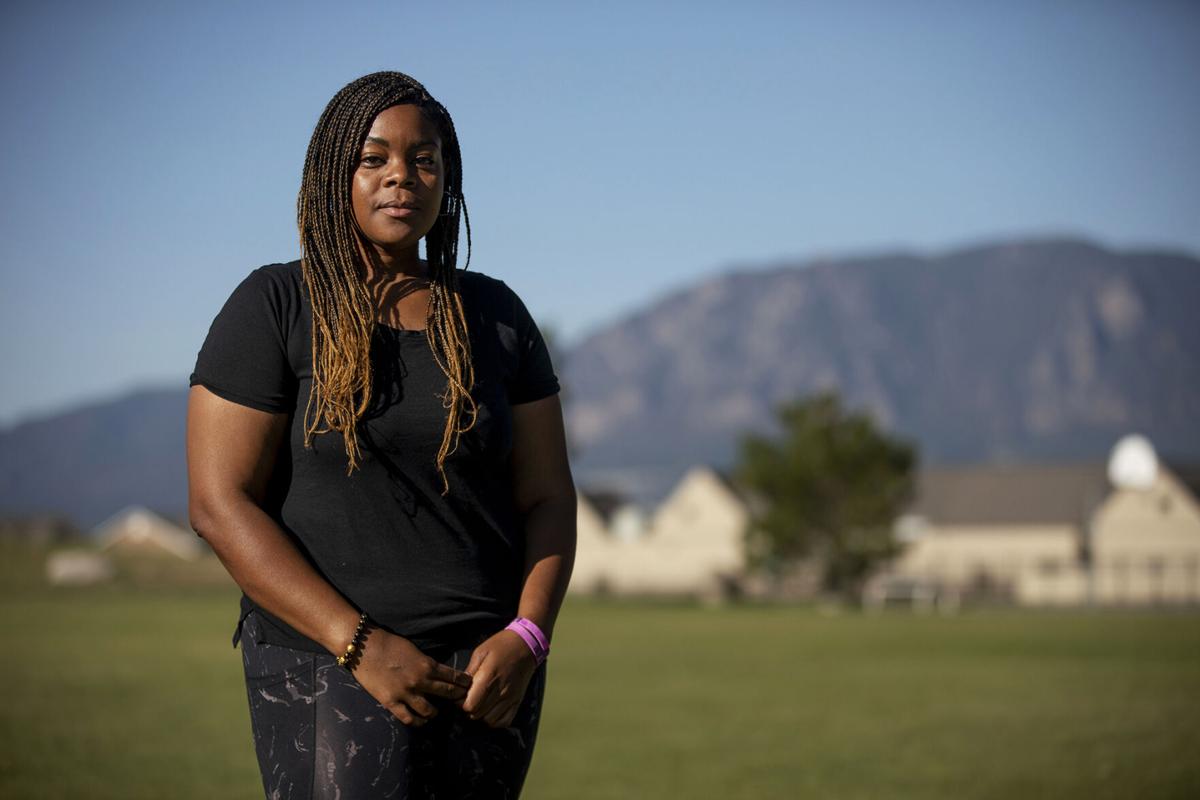 Unaffiliated voter Latrina Ollie has helped found Be the Change 719 after the Black Lives Matter protests this summer to help residents in southeast Colorado Springs get involved in politics and community activities. (Chancey Bush/ The Gazette) 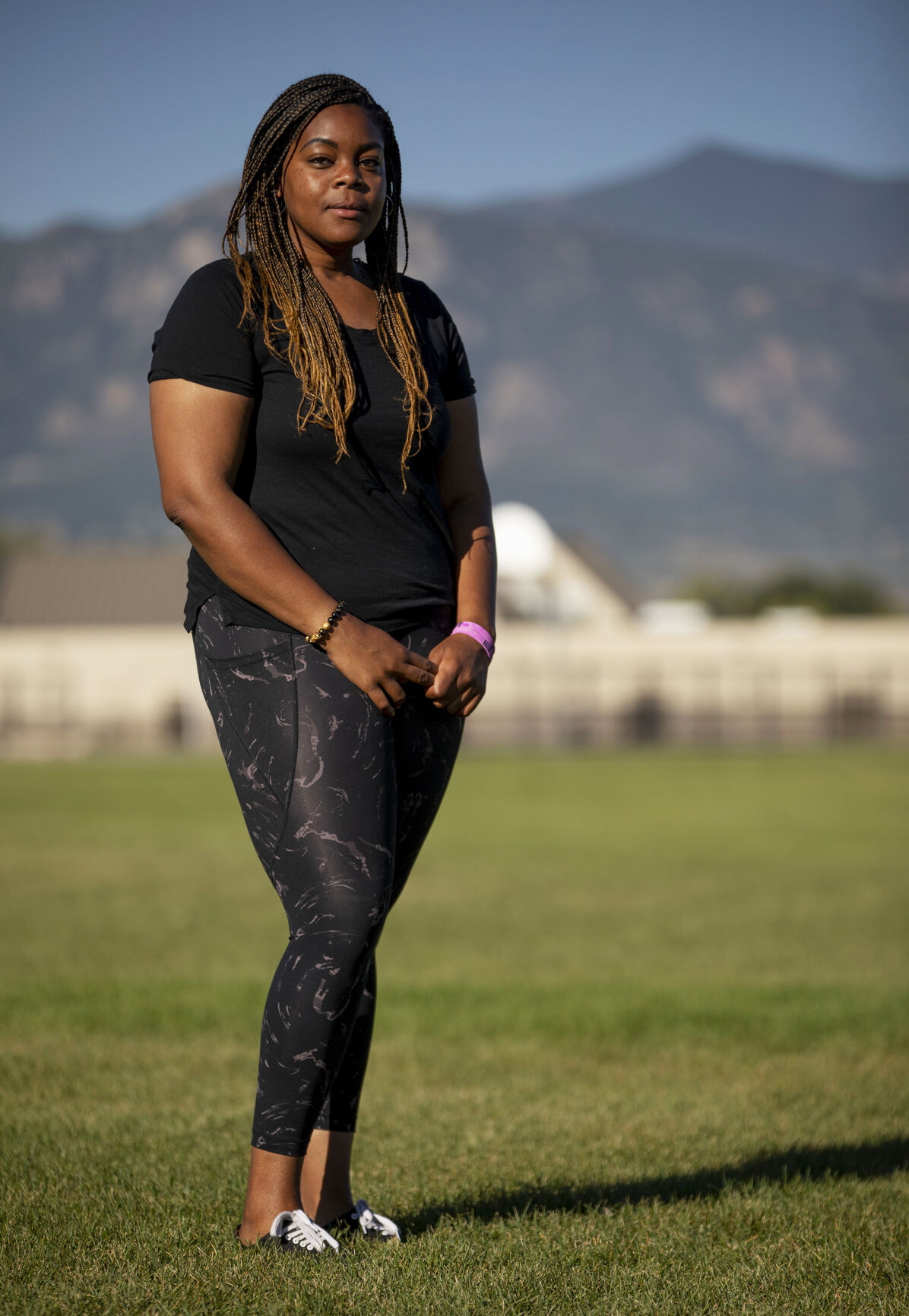 Unaffiliated voter Latrina Ollie helped found Be the Change 719 after the Black Lives Matter protests this summer. “If people keep being silenced you are not going to see change happen,” Ollie said.

El Paso County Commissioner Stan VanderWerf, far right, works with volunteers with his campaign for reelection at the Good Neighbors Meeting House in September. The group planned to knock on doors and talk with voters later in the afternoon.

Candi Boyer, a local Republican, is working to reelect Donald Trump partially because of his position on public safety and support for the military.

Unaffiliated voter Latrina Ollie has helped found Be the Change 719 after the Black Lives Matter protests this summer to help residents in southeast Colorado Springs get involved in politics and community activities. (Chancey Bush/ The Gazette)

Unaffiliated voter Latrina Ollie helped found Be the Change 719 after the Black Lives Matter protests this summer. “If people keep being silenced you are not going to see change happen,” Ollie said.

Editor's Note: This story is part of an occasional series to capture views among Coloradans.

As the presidential race enters its final weeks ahead of the November election, the Republican Party’s hold on El Paso County is strong, but perhaps not as tight as it once was, Democrats say.

The county is known as a GOP stronghold, and most of the county's voters weren't born the last time a Democratic presidential candidate won here. That was Lyndon Johnson, by a scant 4,000 votes over Barry Goldwater. Richard Nixon took El Paso County in 1960, beating John F. Kennedy by 30,000 votes.

Before Johnson, the last Democrat to win over El Paso County's presidential voters was Franklin Roosevelt, in 1936. The county had gone for Herbert Hoover in 1932 and shifted back to the GOP in 1940 and overwhelmingly stayed there.

El Paso County Republicans say they are, again, staunchly behind President Donald Trump, in part, because of how the economy was thriving prior to the spread of coronavirus nationally.

“There is an enormous amount of enthusiasm for President Trump,” said Republican County Commissioner Stan VanderWerf, who has been knocking on doors during his campaign.

Some other top issues for Republicans include reopening schools, public safety and opposing abortion.

However, it is discontent with Trump that is driving new volunteers to the El Paso County Democratic Party, said Electra Johnson, party chairwoman. She is hopeful the party can take a bite out of the strong support that Trump and Republican U.S. Sen. Cory Gardner need in El Paso County to win the state.

The Democrats don’t expect Joe Biden or Senate hopeful John Hickenlooper to win in El Paso County, but a good showing here would increase their chances at taking the state, Johnson said.

“El Paso County is the tipping point for Colorado that turns it red or blue,” she said.

The Democrats have also fielded challengers in all the El Paso County state and county races except district attorney, a first for the party.

Democratic Party volunteer Liz Hershberger is among those working hard to support Biden because she sees it as a moral imperative to remove Trump from office, in part, because of his response to the coronavirus that led to the deaths of about 209,000 Americans. Trump and first lady, Melania Trump, tested positive for the disease late last week and the president has since been hospitalized.

“Four more years of him, I just don’t know what this country would turn into. It scares the living hell out of me,” she said.

For Hershberger, working on Biden's campaign means making phone calls, writing postcards and selling yard signs, buttons, ribbons and banners to Democrats. The Colorado Democratic Party is forgoing knocking on doors this year to help prevent the spread of coronavirus.

In addition to removing Trump, Democrats say they are concerned about climate change, police reform, health care and better representation of communities of color among elected leadership.

Members of both parties want to see a strong economic recovery from the coronavirus, volunteers and party leaders say. The unemployment rate in El Paso County in August was 6.8% after 8,700 people left the job market.

Candi Boyer said she is working to reelect Trump in El Paso County because of his position on public safety, support for the military and record on the economy, including the trade deals he signed with China, Mexico and Canada.

“I feel like he is working to give us security and safety in our country,” said Boyer, the treasurer of the El Paso County Republican Women.

For Boyer, supporting Trump means looking beyond his “frailties as a human being,” such as how he uses his Twitter account, she said.

“He, maybe, could be more circumspect in how he phrases things,” she said.

Catherine Hendrix attended the Young Black Leadership Summit last year where she saw Trump speak and was convinced of his genuine intent as a leader.

"He truly believes what he is saying," she said.

She particularly supported Trump's appointment of Betsy DeVos as Secretary of Education.

"I believe many of her policies are to help educational choice in larger cities … (Where) families are stuck in failing districts, failing schools and they really can't do anything about it," she said.

Southeast Colorado Springs includes Colorado House District 17, an area that consistently sees the lowest turnout in the state, Johnson said. In 2018, House District 17 had a voter turnout of about 42% the lowest compared to the other 62 House districts, secretary of state data shows.

The district is also the most competitive in the county and has flipped back and forth between the Democratic and Republicans parties.

Ollie helped found Be the Change 719 to help educate and engage voters in southeast Colorado Springs.

“If people keep being silenced you are not going to see change happen,” Ollie said.

The group drew about 250 people to one of its recent voter registration events.

Gov. Jared Polis’ stay-at-home order in the spring sparked interest among residents particularly in racial issues and police reform because they were at home paying attention to the news when George Floyd, a Black man was killed by white police officers in Minnesota, Ollie said.

“A lot of people are more aware now than what they might have been before,” she said.

However, Be the Change 719 is not strongly aligned with either political party and Ollie said there is some hesitancy among voters to support Biden because he has backed longer criminal sentences in the past.

“I feel like a lot of people want to get away from the two-party system,” she said.

Marchman co-founded Colorado Springs Oversight, a group focused on racial equality locally and voter education, and she believes that the demographics in Colorado Springs are shifting as people from northern Colorado communities move in.

“We just really hope to see a voter turnout in the city that’s never happened before,” she said.

Colorado Springs Oversight, similar to Be the Change 719, is focused on issues like police reform and would like to see a zero-tolerance policy on police brutality in the city.

It is also interested in supporting candidates that are pro-women, pro-immigrant, support Black Lives Matter and have a strong plan for recovering from the coronavirus. In the future the group would like to educate residents on how to run for office.

"The highest priority would probably be leadership that is going to listen to their constituents and really represent a changing world,” Marchman said.

Republican Senate District 10 Chairman Eli Bremer and VanderWerf have confidence in a strong Republican showing in El Paso County even though the El Paso County Republican Party is not organizing many campaign events or activities because of internal conflicts.

"I think right now everything is going to come down to the economy and the government shutting down the schools. … People make decisions based on what’s right in front of them," Bremer said.

The GOP is best poised to deal with those issues, he said. Although, school decisions are most often left in the hands of local school district boards.

VanderWerf said GOP voters are energized and that any shift away from the Republican Party in El Paso County is many years away.

But the Democrats in El Paso County are focused on the fight, particularly the presidential and Senate races.

Johnson said while Biden was not the first choice for many Democrats, he is a moderate that will draw a broad base.

"We need to shift and change and we need to move quickly on things like climate change," she said.

A printing error included the Louisville city council’s Ward 3 race on all ballots in the city.