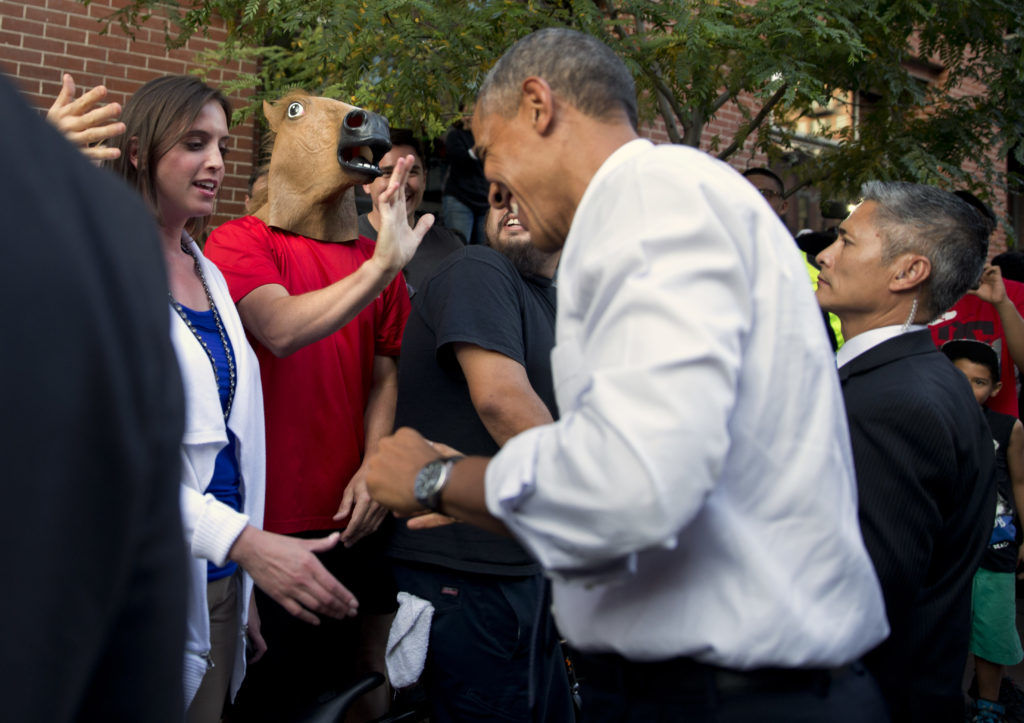 Then-President Barack Obama laughs as he spots a man wearing a horse-head mask during an impromptu walk down 15th Street after having dinner at Wazee Supper Club on July 8, 2014, in Denver. (AP Photo/Jacquelyn Martin-file) 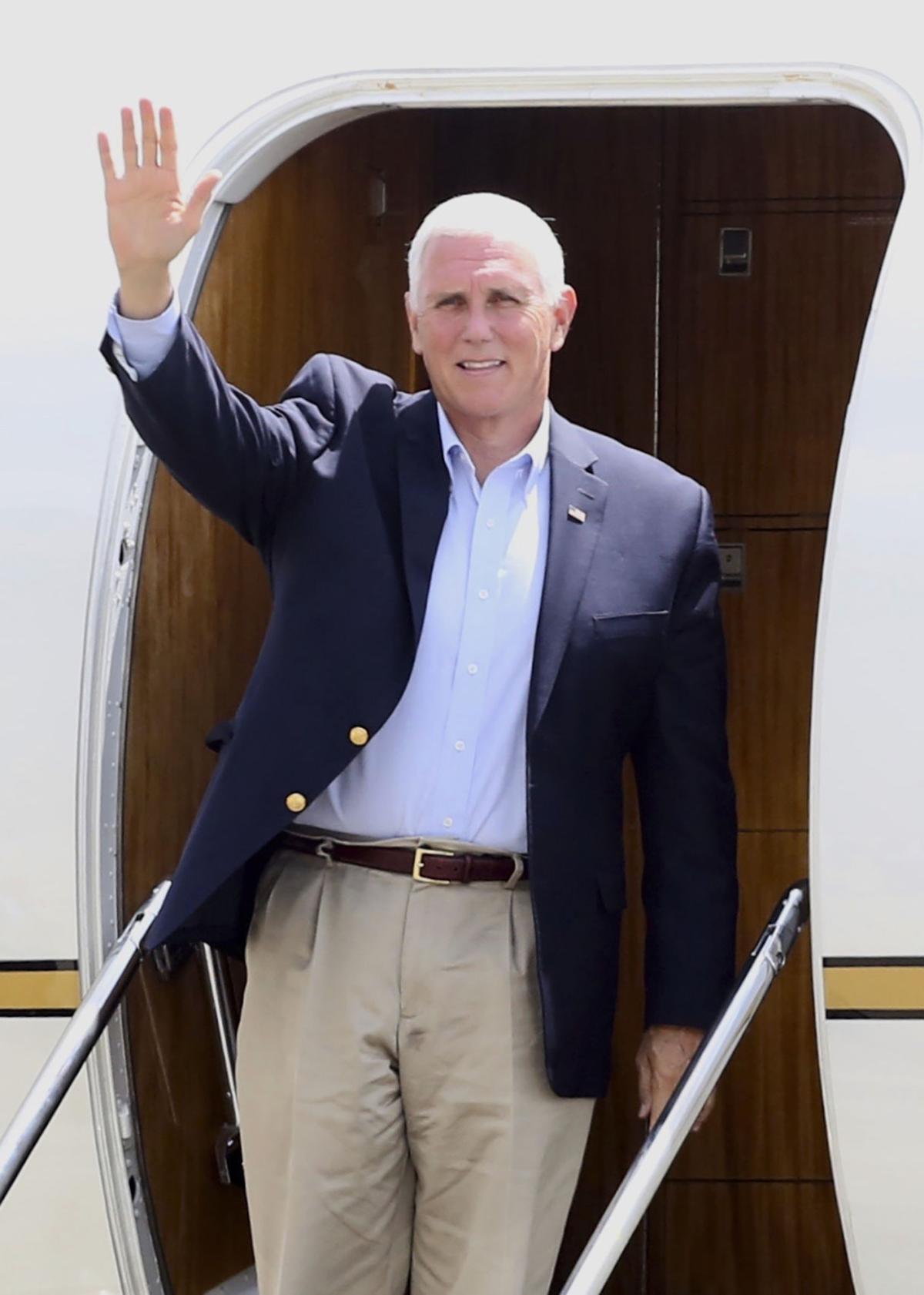 Air Force Two set down in Colorado on Monday, bearing Vice President Mike Pence on a mission to raise money for U.S. Sen. Cory Gardner, President Donald Trump and the Republican National Committee, as well as to partake in some kibitzing at the Republican Governors Association meeting in Aspen.

It was only when Pence was whisked from the tarmac to the isolated Windsor mansion of developer Martin Lind for the Gardner event, however, that news emerged that the state's junior senator — one of the most vulnerable Republican lawmakers on next year's ballot — would be skipping his own party.

Instead, Jaime Gardner, the senator's wife, would be on hand to thank donors, who ponied up as much as $25,000 for the chance to rub elbows with Pence.

Gardner, it turned out, was jetting back to the nation's capital for some important Senate business — including a vote on President Donald Trump's nomination of Mark Esper to run the Department of Defense. (With Gardner's support, the former lobbyist for top defense contractor Raytheon was confirmed on a 90-8 vote.)

It was the latest demonstration of Gardner's gymnastics in a state where polling consistently shows Republicans adore Trump but Democrats and unaffiliated voters abhor the president.

“Given Trump’s deep unpopularity in Colorado, it should come as no surprise that vulnerable Sen. Cory Gardner is avoiding a public event with Trump’s VP," scolded Morgan Carroll, chair of the Colorado Democratic Party, in a statement. "But hiding from a photo-op can’t erase Gardner’s record of staunch support of Trump’s divisive agenda, nor will it stop Coloradans from rejecting both Gardner and Trump in 2020.”

Mocking "Gardner’s conspicuous absence at his own campaign event," the Democratic Senatorial Campaign Committee poured on the brickbats.

"Vice President Mike Pence was in Colorado [Monday] to fundraise for Senator Cory Gardner," the DSCC's Stewart Boss said in a release.

"But there was one key person missing from the event: Sen. Cory Gardner. In the past, Gardner has proudly endorsed President Trump’s re-election, promised to campaign alongside him in 2020, and voted with the White House 99% of the time. Now, as the president’s approval continues to tank in Colorado, Gardner is trying to have it both ways, skipping appearances with Trump and Pence while continuing to vote in lockstep with their toxic agenda."

Trump thanks Cory Gardner for endorsement: 'We will all win in 2020'

Alice Madden, one of 10 Democrats running in a primary for the chance to take on Gardner, tweeted: "The Trump Administration is so embarrassing and out of touch with Colorado values Cory Gardner can't even be bothered to show up to his own fundraiser with VP Pence."

If the broadsides sounded familiar, it's because Gardner and his fellow Republicans leveled almost exactly the same attacks at then-U.S. Sen. Mark Udall five years ago when the Democrat stayed in DC for a Senate vote rather than attend his own fundraiser in Denver with then-President Barack Obama.

In July 2014, it was Gardner challenging an incumbent senator who appeared to be putting some distance between himself and an unpopular president ahead of a tough bid for a second term.

The Democrats have scored big wins at the ballot box in Colorado for the past two cycles, possibly obscuring how deeply underwater Obama was with state voters in 2014.

Even though the Democrat had carried Colorado twice, by the time he showed up to raise money for Udall in the summer of 2014, the president was averaging a 41% approval rating among Colorado voters, with an average of 55% disapproving — only a couple percentage points healthier than Trump's 2019 approval rating in the state.

All year, Udall — as consistently loyal an Obama supporter in the Senate as Gardner has been a supporter of the Trump administration — had been drawing jeers at his attempts to distance himself from the president, starting the night of Obama's 2014 State of the Union address in January when Udall couldn't say whether he wanted Obama to campaign for him in Colorado that fall.

That was the backdrop when Udall announced at the last minute that he had cancelled plans to return to Denver for the Obama fundraiser and instead would stay in DC to vote to confirm Julian Castro as housing secretary, which passed on a 71-26 vote.

A spokesman for Gardner's campaign tore into Udall.

“The only difference between President Obama’s campaign speech today and every other one he has given was that Sen. Udall wasn’t standing by his side,” said Alex Siciliano. “Sen. Udall has been more than willing to follow the president on everything from healthcare and gun control to energy and out-of-control government spending. Make no mistake about it, a vote for Sen. Udall is a vote to reinforce President Obama’s old and tired policies.”

The National Republican Senatorial Committee — the DSCC's counterpart — piled on:

“Actions speak louder than words. It’s clear that the president is beyond toxic, and Mark Udall’s campaign is running scared.”

Later that summer, Udall provoked more mockery when he talked tough about standing up to the Obama administration during the first general election debate — and went on to lose to Gardner in a squeaker, trailing the Republican by 1.9 percentage points in what turned out to be a national wave year for the GOP.

There were a few differences between the Pence's July 2019 campaign swing through Colorado and Obama's visit in July 2014.

Unlike Pence, Obama didn't exactly slip in and out of the state.

In addition to the fundraiser for Udall, which was closed to the public, Obama held a rally in Denver's Cheesman Park, where he touted the country's recovering economy and blasted congressional Republicans for filibustering Democratic legislation and threatening government shutdowns when they couldn't get their way.

The night before the Udall fundraiser, Obama got plenty of attention — and made national and international news — when he ate dinner with supporters at Wazee Supper Club tand later beat then-Gov. John Hickenlooper playing pool at the Wynkoop Brewing Company, which the governor had founded.

After he forked over the $20 he'd lost to the president — it eventually found its way to a charity — a smiling Hickenlooper later said, "The man is a shark," and added: "I didn't know that people in Hawaii played that much pool. But evidently they do."

On the way to the Wynkoop, Obama greeted crowds as he strolled the streets of Denver's Lower Downtown, and even made some history when he became the first U.S. president to shake hands with a man wearing a horse mask.

TRAIL MIX | A zag is bound to be ahead for GOP

If history is any guide, Colorado won't be under one-party control for long.

“I'm going to keep fighting the fight for the communities and the neighborhoods and the issues out there,” she told Colorado Politics.

TRAIL MIX | Hancock is no stranger to mudslide runoffs

Runoffs for Denver mayor are full-contact contests, thick with flying elbows, plenty of fur and the occasional mud.

President Trump will win a second term if Democrats choose a "professional politician" to run against him, the filmmaker and liberal rabble rouser says — and he includes in that category a certain former Colorado governor.

There are examples of Colorado politicians who lost big elections only to return and win, and they're among the towering figures in our political history.

TRAIL MIX | 'Government in the Grocery': Shopping for a connection to Congress

More than a dozen constituents showed up on a recent sunny Saturday morning to speak with U.S. Rep. Ed Perlmutter inside a classroom next to the dairy aisle at a Natural Grocers in Lakewood.

TRAIL MIX | Latest sign of McCaskilling in the Rockies

Republicans are trying to brand the Democrats as harebrained liberals ready to drive the country off a cliff toward full-blown socialism.

The field of Democrats vying to unseat Republican U.S. Sen. Cory Gardner is beginning to sort itself out, though what promises to be a crowded race still appears entirely up for grabs.