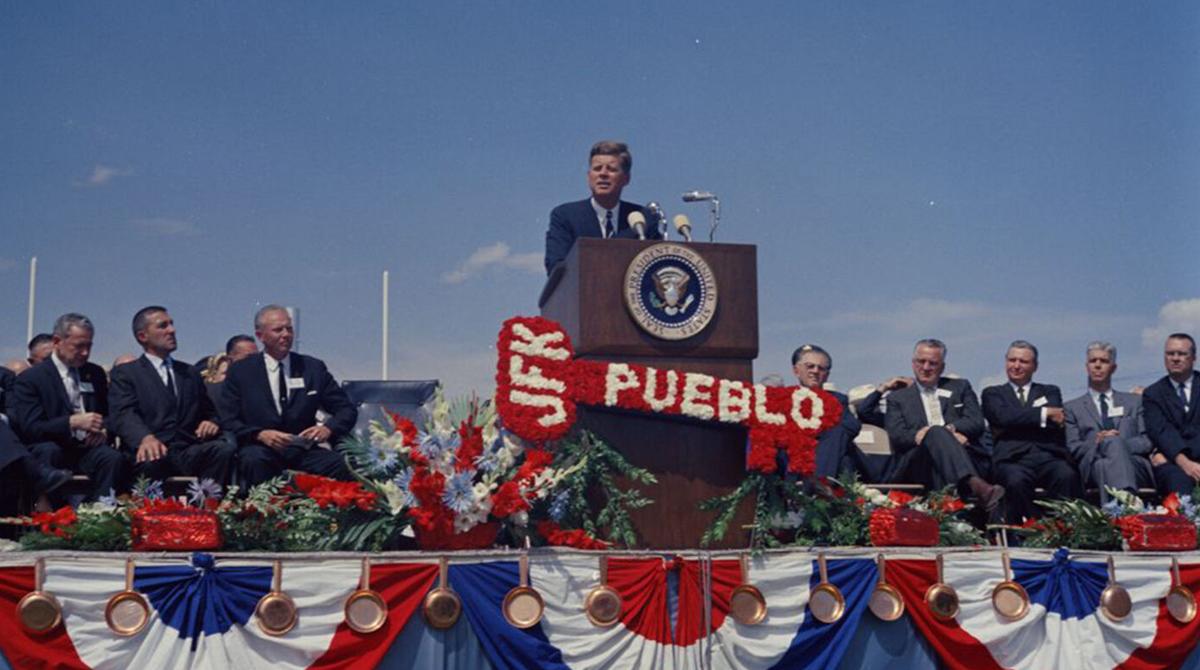 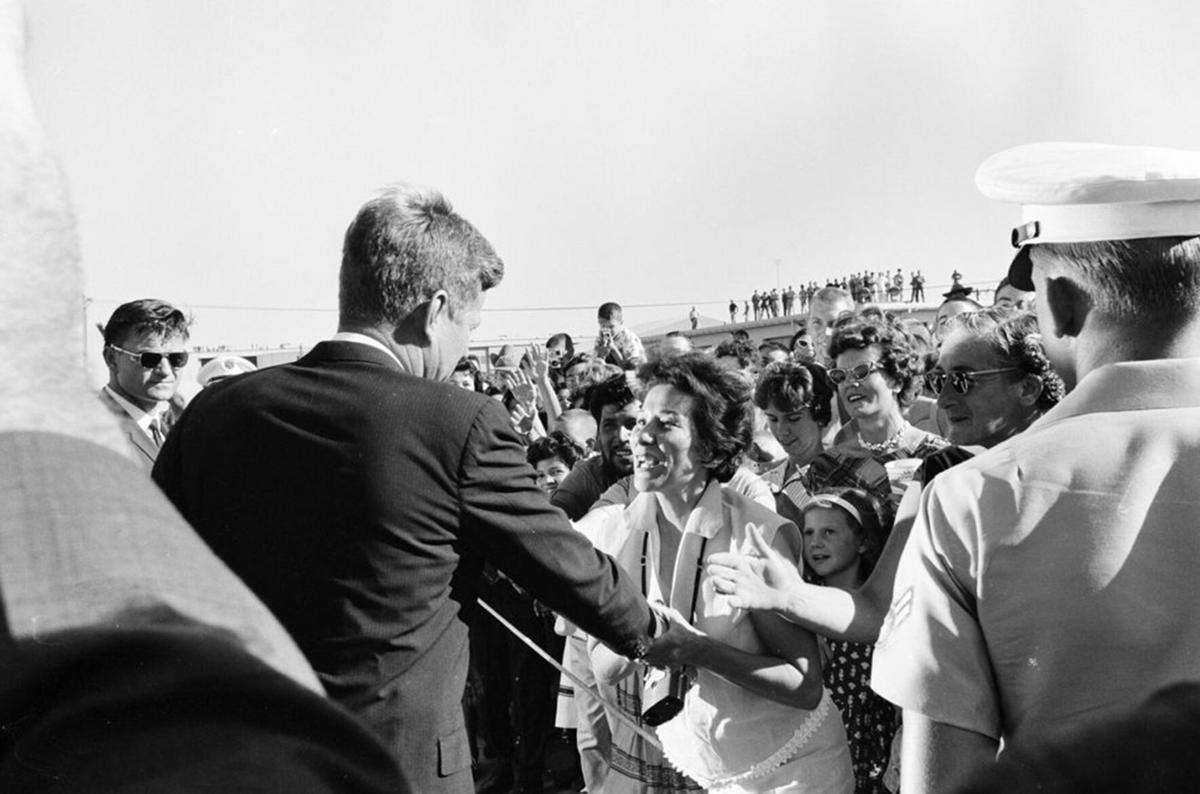 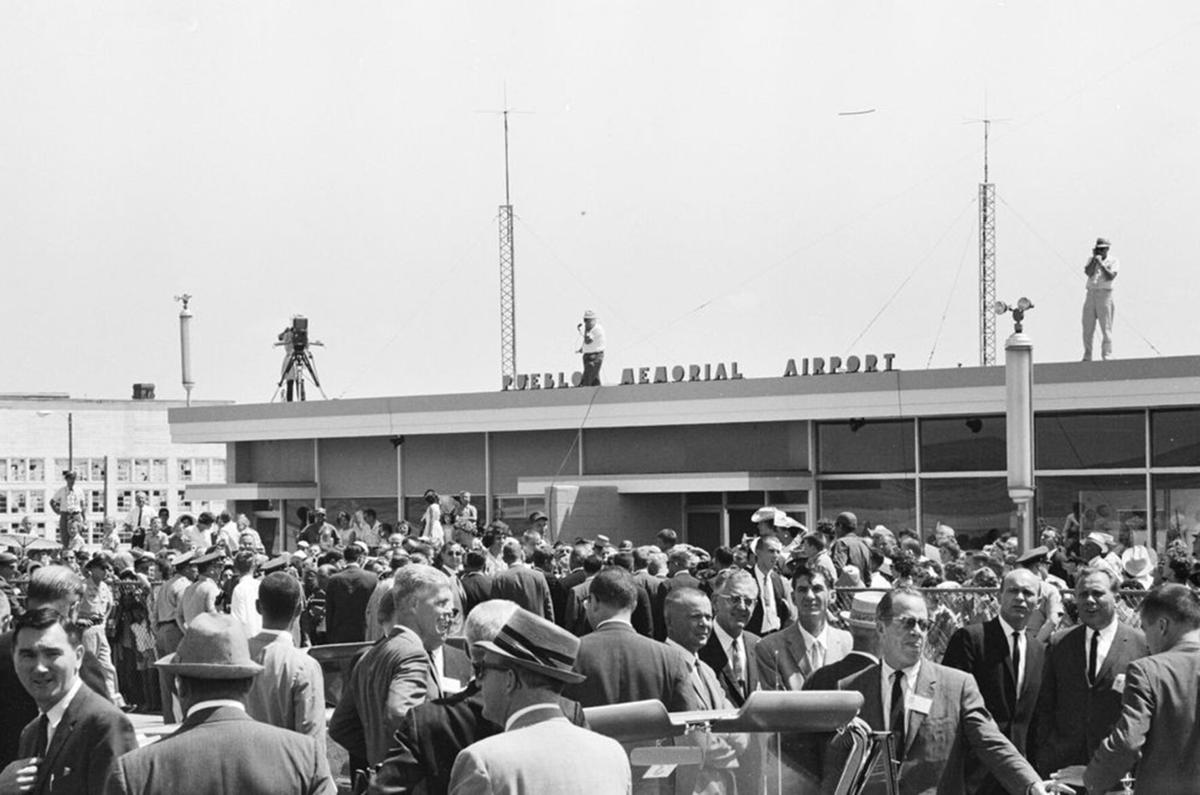 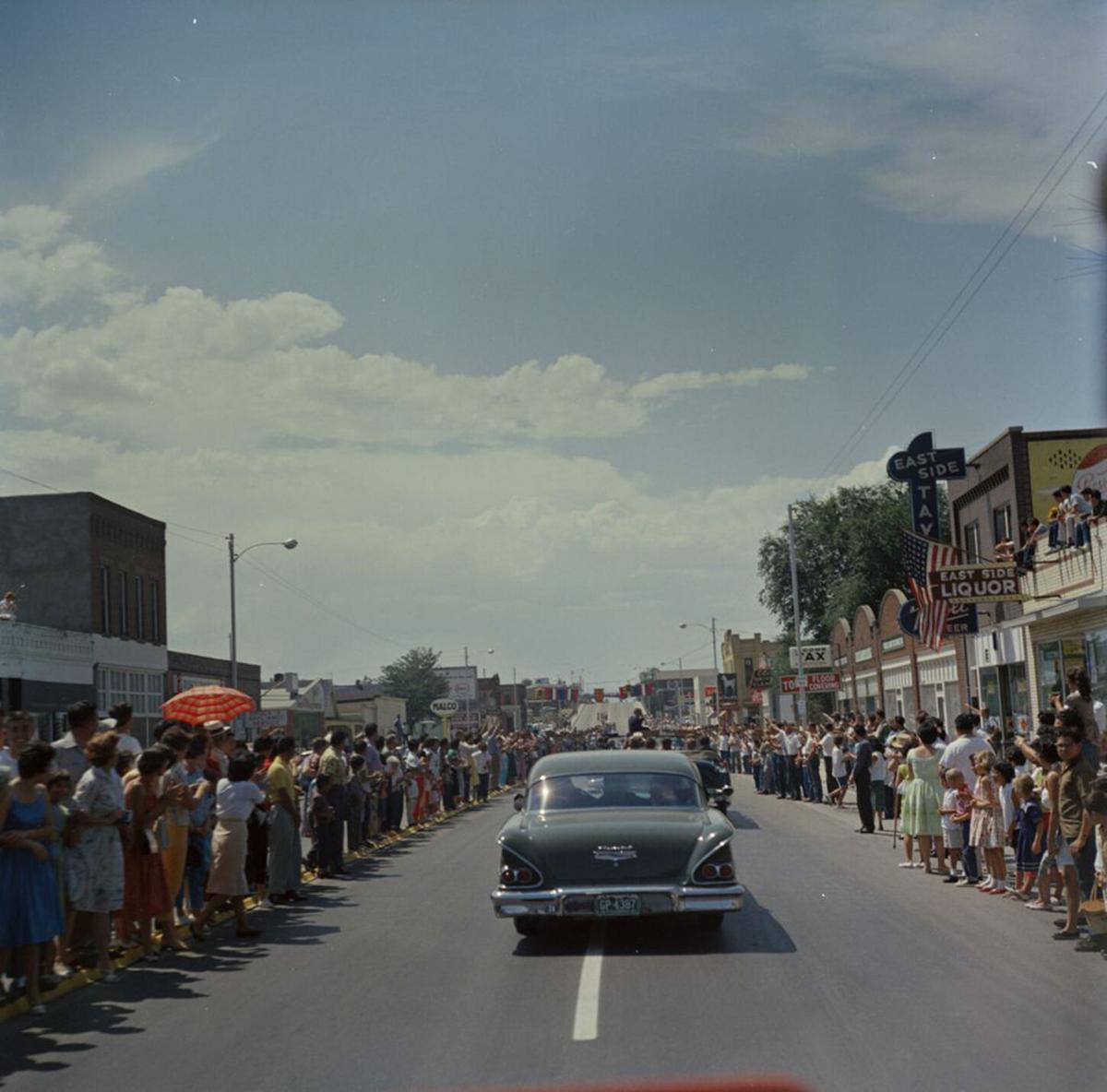 President John F. Kennedy (center right, in background) stands in a convertible as his motorcade travels down 4th Street in Pueblo, Colorado. Crowds line the street. [Blemishes on image are original to the negative.] 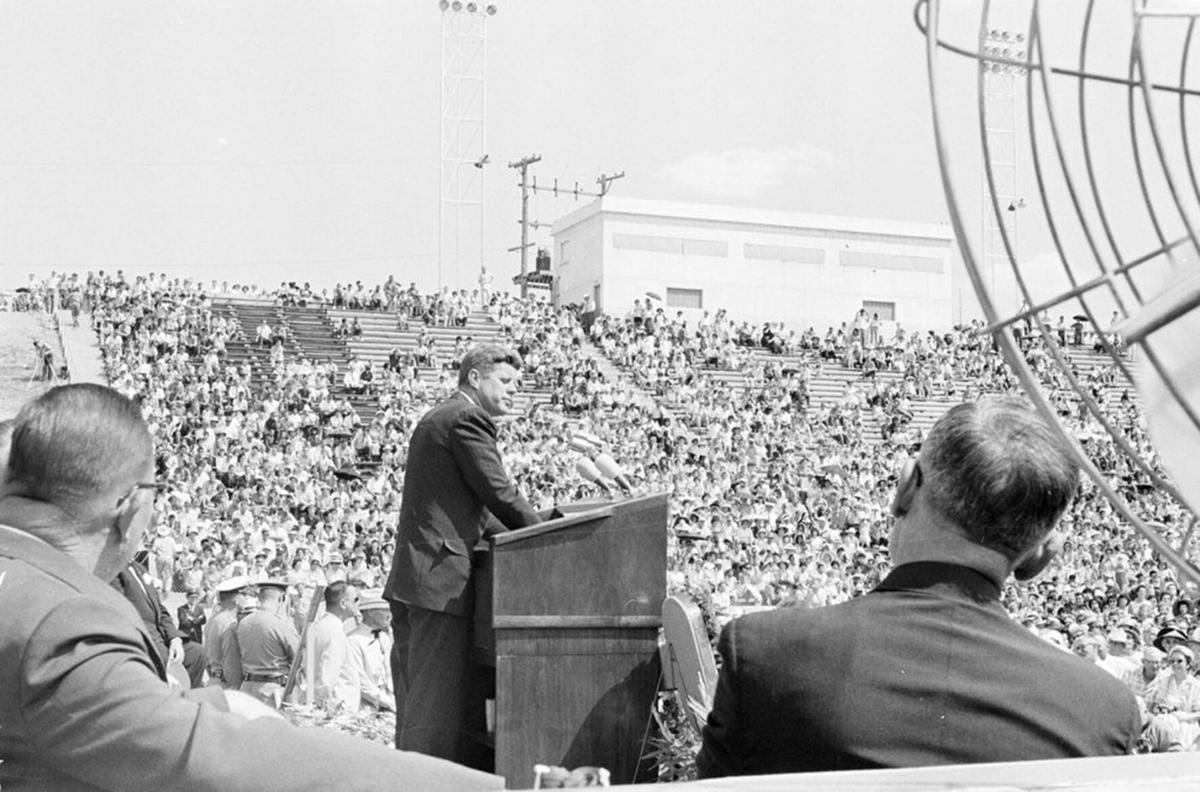 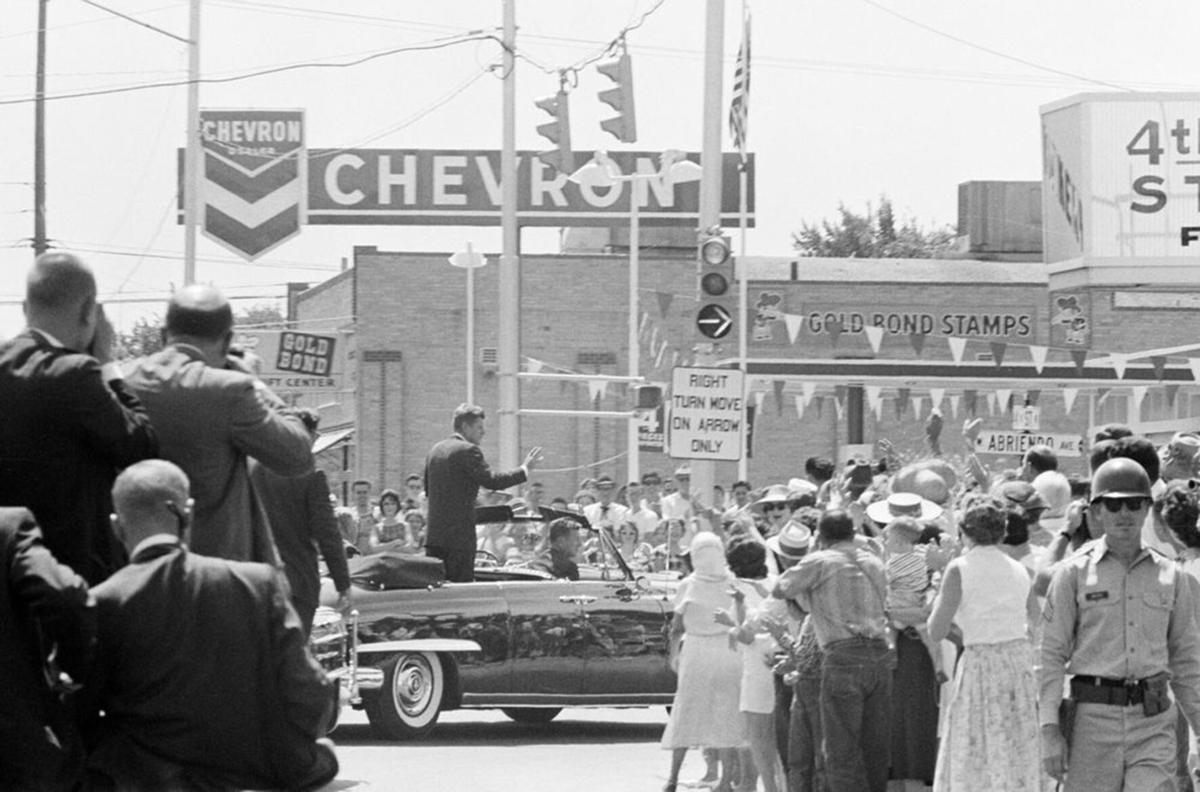 President John F. Kennedy (standing in car) waves from a convertible as his motorcade travels through Pueblo, Colorado. Crowds line the street. [Scratches on image are original to the negative.] 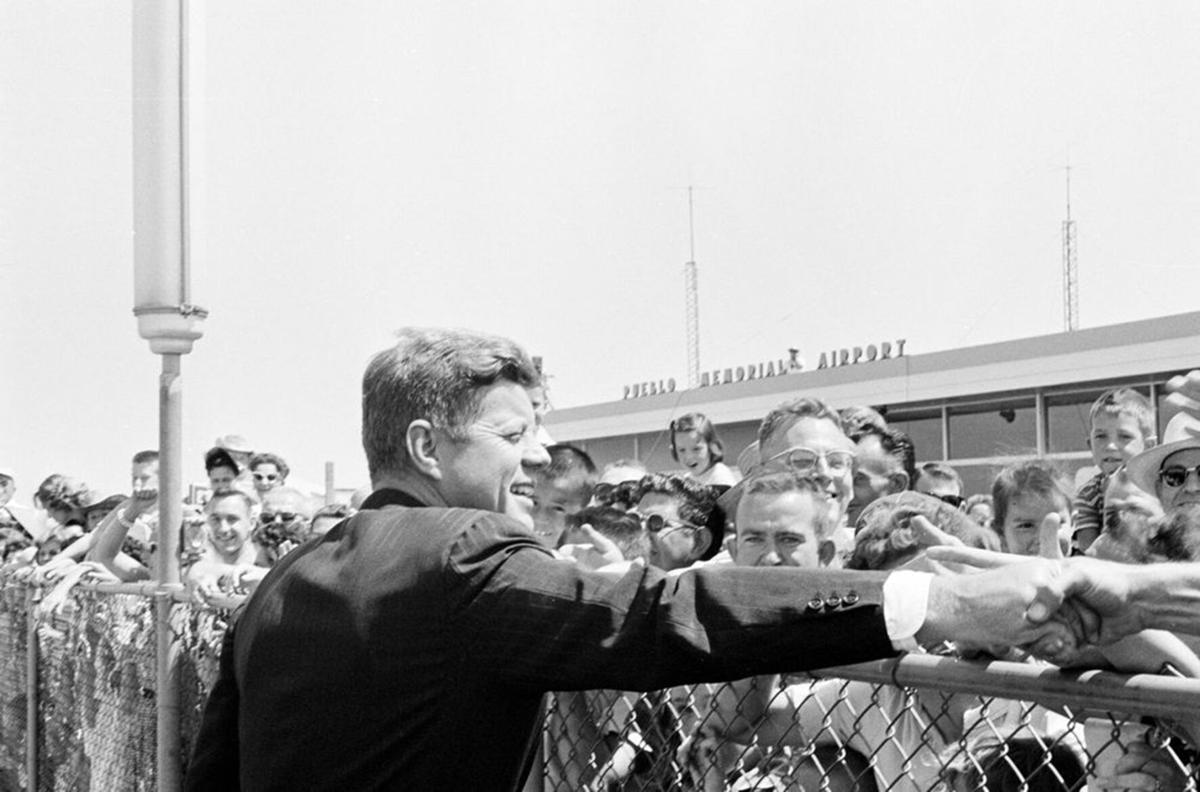 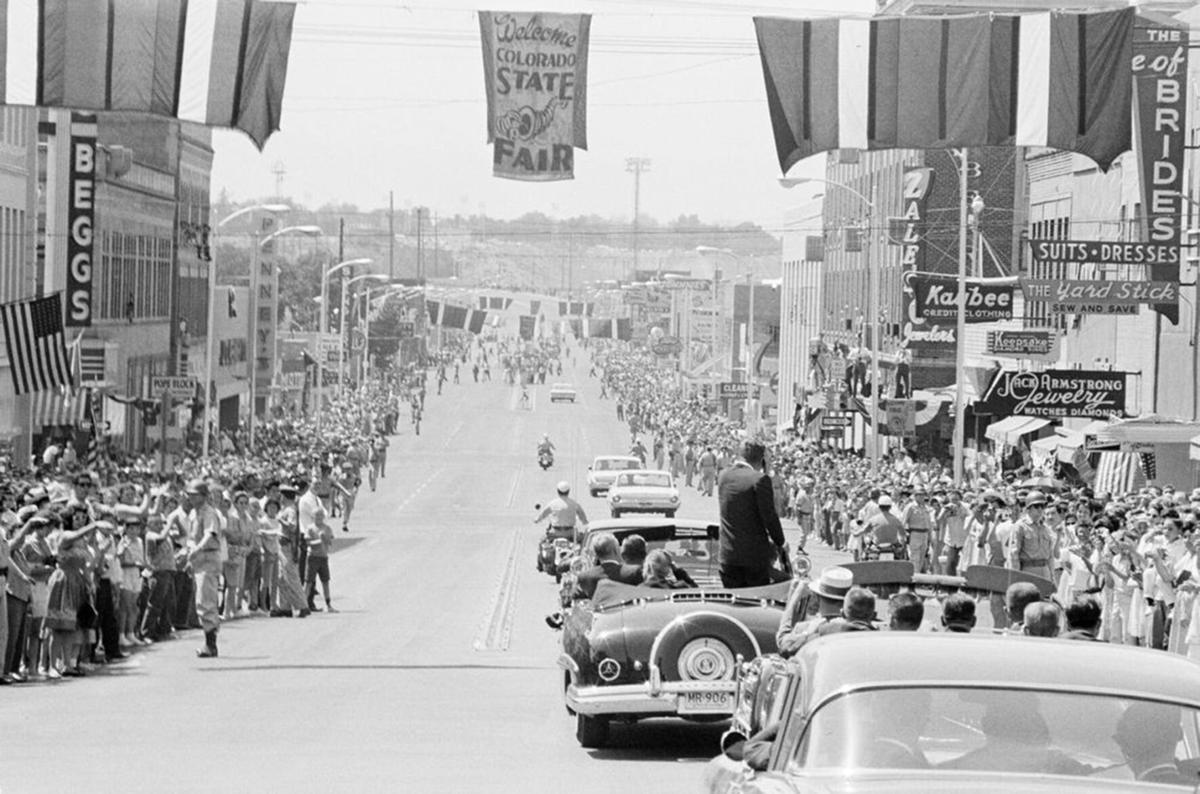 President John F. Kennedy stands in a convertible as his motorcade travels down 4th Street in Pueblo, Colorado. Crowds line the street.

President John F. Kennedy (center right, in background) stands in a convertible as his motorcade travels down 4th Street in Pueblo, Colorado. Crowds line the street. [Blemishes on image are original to the negative.]

President John F. Kennedy (standing in car) waves from a convertible as his motorcade travels through Pueblo, Colorado. Crowds line the street. [Scratches on image are original to the negative.]

President John F. Kennedy stands in a convertible as his motorcade travels down 4th Street in Pueblo, Colorado. Crowds line the street.

In its closing weeks, Colorado's grueling U.S. Senate race between Cory Gardner, the Republican incumbent, and John Hickenlooper, his Democratic challenger, witnessed a surprise guest appearance by a politician in an unexpected role — President John F. Kennedy, stumping alongside Gardner in a TV commercial.

JFK is only the latest prominent Democrat to land a starring role in a Gardner commercial, joining Gov. Jared Polis, U.S. Sen. Michael Bennet, former President Barack Obama and even Hickenlooper, who gets a nod for some nice things he said about Gardner before they were running against each other.

Hickenlooper, of course, has appeared plenty more times in Gardner ads since June as the brunt of Gardner's mockery and attacks — usually in brief clips from interviews when the Democrat said he wasn't cut out for the Senate, and once in footage from the famous 2010 ad Hickenlooper released when he was mayor of Denver and jumped in the shower with his clothes on because he didn't like negative political ads.

While both candidates aired their share of negative ads — "contrast ads," Hickenlooper maintained for a while before acknowledging he'd gone on the attack — they spent more of their own campaign dollars on positive ads highlighting their accomplishments, leaving the most blistering attacks to outside groups.

Gardner's first ad, outlining his efforts to secure protective equipment in the early months of the COVID-19 pandemic, included a testimonial from Polis, who said the senator had done everything he'd asked to help with the state's response.

Bennet showed up earlier this month in a Gardner ad touting the benefit of having a senator from each major party, a bipartisan arrangement he said in a tweet embodies "the true spirit of Colorado."

"Colorado gets two senators — one a Democrat and one a Republican — and it works," Gardner says in the ad.

"I’m pleased once again to have the chance to reiterate my strong endorsement of John Hickenlooper," Bennet tweeted back at Gardner.

The same ad quotes Hickenlooper, when he was governor, saying, "You've got Cory Garner, a moderate, and he's very collaborative, working with Michael Bennet all the time."

Obama showed up about a month ago in a Gardner ad boasting about the senator's success seeing more bills signed into law than the rest of the state's congressional delegation combined — "half under President Obama and half under President Trump," the announcer says as the two presidents sign bills in a split screen.

So it's only natural that Gardner's closing ad, a 60-second opus that plucks nearly all the feathers in the incumbent's cap, should feature archival footage of JFK orating in Colorado in 1962 about a project Gardner helped push toward fruition 58 years later.

"I brought both parties together to finally fulfill a conservation promise John F. Kennedy made in Pueblo, CO more than 50 years ago," Gardner said in a statement announcing the ad's release. "From the 'holy grail' of conservation laws to the Bureau of Land Management to U.S. Space Command and more, I've dedicated my time in the Senate to delivering great results for our state, and another term will ensure that Coloradans have a fighting voice in Washington."

While on a swing through Western states, Kennedy squeezed in a speech in Pueblo on Aug. 17, 1962, between stops at South Dakota's Oahe Dam on the Missouri River  and Yosemite National Park in northern California.

In Pueblo, Democratic U.S. Sen. John Carroll presented JFK with an engraved frying pan to symbolize the recently approved Fryingpan-Arkansas water project the president had come to town to celebrate.

The water diversion project, which had been in the works for some three decades by the time Kennedy declared it was on its way to becoming a reality, moves more than 50,000 acre-feet of water annually from the Fryingpan River basin on the Western Slope to the Arkansas River basin, supplying Pueblo, Colorado Springs and downstream locations.

It was a storied day when Kennedy, the nation's first Catholic president, came to visit then-predominantly Catholic Pueblo. According to local accounts, the city's schools and businesses closed for the occasion, and more than 100,000 people lined the highway and Fourth Street for the president's motorcade from Pueblo Memorial Airport to the Pueblo High School Stadium — since renamed Dutch Clark Stadium — where 18,000 people cheered JFK's speech.

On a podium decorated with frying pans and a key to the city made of what looked like carnations, Kennedy delivered a rousing, 12-minute speech about the country's history of interdependence, making a case for the residents of each state to work for the betterment of every other state, with an eye toward the future, since some projects wouldn't be completed until their instigators were long gone.

The Gardner commercial runs the footage of Kennedy's speech though some sort of digital filter that makes it look like it's appearing on an old cathode-ray television set, probably one with an oak veneer exterior and hi-fi sound, though would someone get up and knock the side of the set to adjust the vertical hold?

"I hope that those of us who hold positions of public responsibility in 1962 are as far-seeing about the needs of this country in 1982, in 1992 as those men and women were 30 years ago who began to make this project possible," Kennedy said, surrounded by dozens of dignitaries, most wearing hats.

"The world may have been built in seven days, but this project was built in 30 years and it took labor, day in and day out, week in and week out, month in, month out, year in and year out, by congressmen and senators, and citizens, and the residents of the states, to make this project possible, and it will be some years before its full benefits are made available to all of you."

In that familiar Boston-accented cadence, Kennedy continued: "What I preach is the interdependence of the United States. We are not 50 countries. We are one country of 50 states and one people, and I believe that those programs which make life better for some of our people will make life better for all of our people. A rising tide lifts all of the boats. As Colorado moves ahead, as your steel mill produces, it is benefiting all the people, as they are benefiting you. That is the lesson of this project."

Near the end of his speech, JFK mentioned another item on his wish-list, one Gardner had a hand in seeing finally completed this year with the passage of the Great American Outdoors Act, nearly six decades after Kennedy called for it.

"And I hope we will provide for the land conservation fund which will open up a whole new area of conservation," Kennedy said, describing funding for the program the Gardner-sponsored bill finally fulfilled.

Critics maintain Gardner is taking too much credit for legislation that, like the Frying Pan-Arkansas Project, had been in the works for years and had many parents, but the Republican was the one carrying the ball when it crossed into the end zone.

Social media wasn't kind to Gardner when he posted the ad online, with dozens of variations of the line Lloyd Bentsen flung at Dan Quayle during the 1988 vice presidential debate, when Quayle compared himself to the young Jack Kennedy.

President Donald Trump’s administration failed to meet the Nov. 2 deadline to submit a list of conservation projects to be funded by the Great American Outdoors Act, putting in jeopardy the bill that Sen. Cory Gardner touted in his unsuccessful reelection campaign.