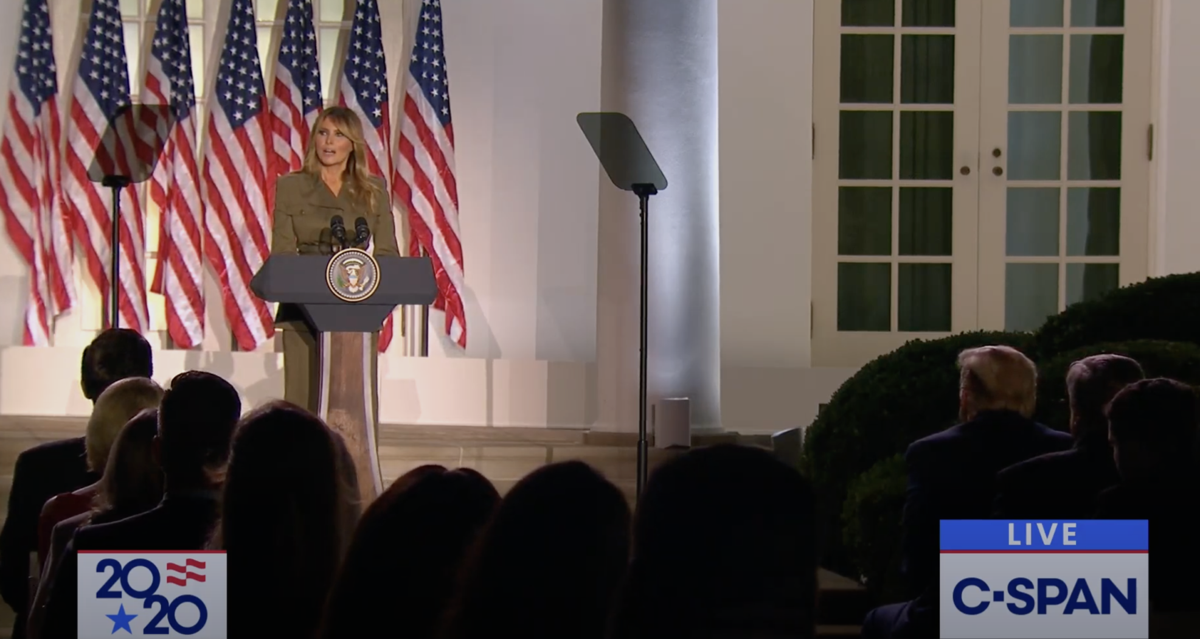 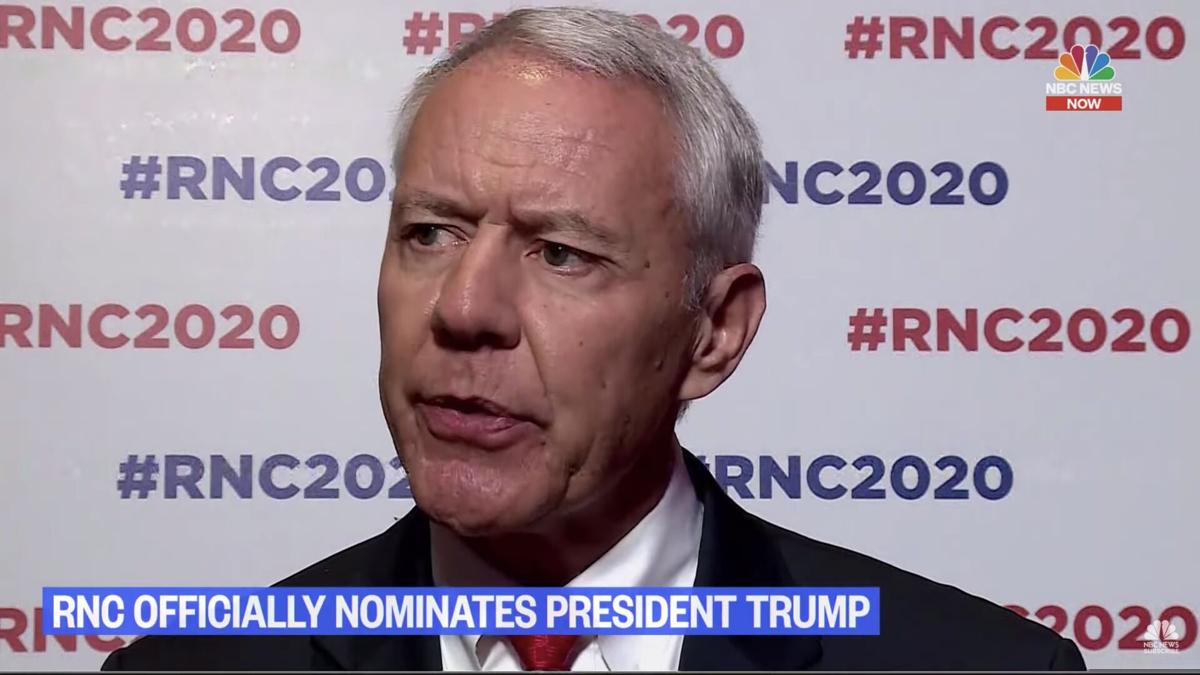 U.S. Rep. Ken Buck of Colorado, the state's GOP chairman, pledges all of Colorado's delegates to Donald Trump at the Republican National Convention on Monday, Aug. 24, 2020. 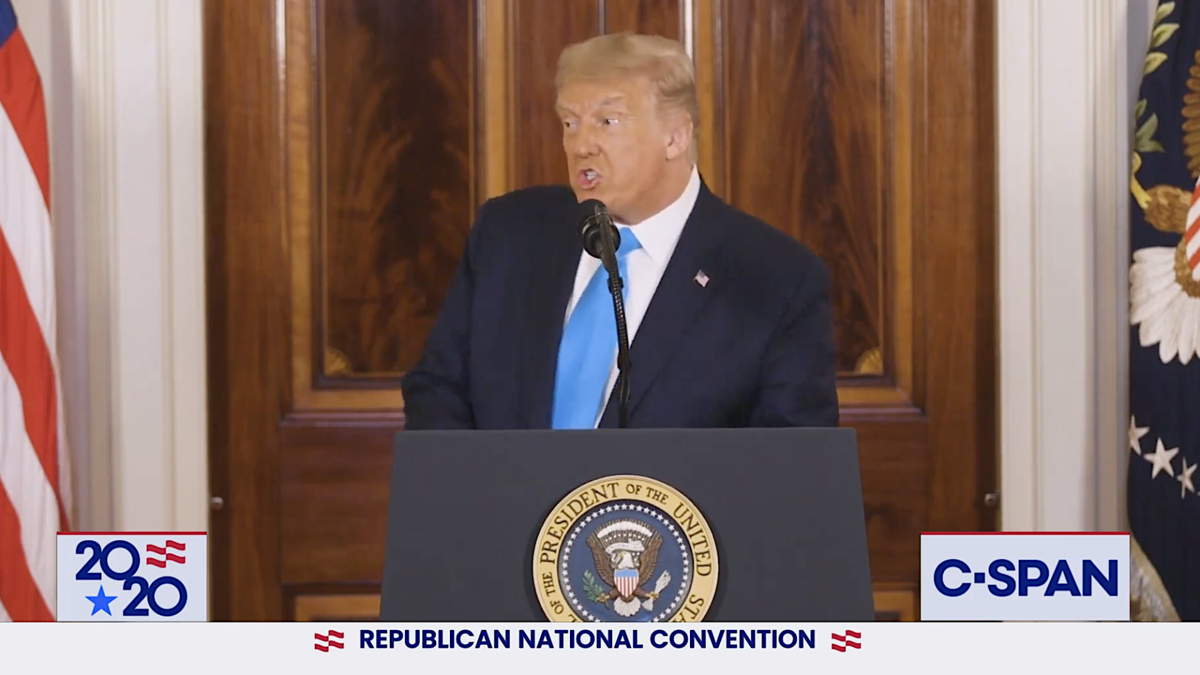 President Trump speaks at a naturalization ceremony for new citizens shown during the Republican National Convention on Tuesday, Aug. 25, 2020.

U.S. Rep. Ken Buck of Colorado, the state's GOP chairman, pledges all of Colorado's delegates to Donald Trump at the Republican National Convention on Monday, Aug. 24, 2020.

President Trump speaks at a naturalization ceremony for new citizens shown during the Republican National Convention on Tuesday, Aug. 25, 2020.

Let’s not avoid the, er, elephant in the room.

Four years ago, most of Colorado’s contingent to the Republican National Convention in Cleveland walked out in protest of President Donald Trump, who was not the first choice of any of the state’s delegates. That was Ted Cruz, who had a terrible relationship with Trump back then.

Colorado’s role in this year's event came down to Ken Buck, who on Monday, took to the brief limelight to pledge all 37 of Colorado delegates to Trump “to keep America great again for President Donald Trump and Vice President Mike Pence."

Besides being a former district attorney, an author and a congressman pledged to the uber-conservative Freedom Caucus, Buck is chairman of the Colorado Republican Party and chairs the state's delegation to the RNC.

Few were in Charlotte this year, so if any Republicans walked out this year, they went out in their yard to breathe the smoky Colorado air.

The convention is Trump's chance to reenergize his campaign, which has been knocked off its wheels by the pandemic, recession, social unrest and Trump's scandals and flubs.

If Trump is in trouble, then hanging on to the U.S. Senate is paramount to slowing the left's agenda. That means Republicans have to defend Colorado's U.S. Sen. Cory Gardner against the perceived political tide.

Trump can't simply rally his MAGA army to help out in states such as Colorado. He lost by 5 percentage points four years ago. Now Trump has a record to run on and troubles to explain.

It would be a tough backdrop for any incumbent, however: 178,000 dead and more than 57 million Americans seeking unemployment benefits since March, plus a gridlocked Congress.

Sunday on "Meet the Press," former Wisconsin Gov. Scott Walker, born to a Baptist minister in Colorado Springs, said his party should look forward, not back, and shelve the grievances and grandstanding.

So far, however, the convention has been the usual menu of economy, immigration, guns, abortion, cancel culture, fake news and the Family Trump.

"He built a thriving economy once and he'll do it again," said rarely seen first daughter Tiffany Trump, before turning on the media and tech giants to allege bias against conservatives Tuesday night.

She took an indirect shot at the portrait painted of Democratic nominee Joe Biden via last week's Democratic National Convention.

"They mask themselves in disguises of decency, as they try to pressure us to mask our own identities and beliefs," Tiffany Trump said.

First lady Melania Trump was the star attraction Tuesday night in the White House Rose Garden she redesigned. Yes, there are plenty of questions about the legality of using the White House for a political campaign event.

"I'm here because we need my husband to be our president and commander in chief for four more years," she said. "He is what is best for our country. We all know Donald Trump makes no secret about how he feels about things. Total honesty is what we as citizens deserve from our president."

Trump will give his official address from the White House Thursday night.

In the audience will be Lauren Boebert, the maverick Republican nominee in Congressional District 3. Trump, however, endorsed incumbent Scott Tipton in the primary. Things change.

This week, Gardner, one of the most endangered Republicans in D.C., had no luck piercing the national spotlight to associate with the president, for better or worse.

Gardner is doing everything he can to localize the race, to make his reelection a campaign about his ideas, his likability and his accessibility against those of his Democratic challenger, former Gov. John Hickenlooper.

As the convention started on Monday, Gardner was visiting an energy co-op in Akron, the hospital in Wray about a $50,000 grant for COVID-19 testing, then a stop in Brush to talk about small businesses, before heading home to Yuma to do Zoom calls. Tuesday was more campaigning, including a live online chat with the Colorado Water Congress.

“I’d rather be in Colorado any day,” he joked Monday night on his car phone about the convention in Charlotte.

The senator said he was unconcerned about the party’s decision not to have an official platform for Trump this year. Not one to agitate the irksome president, Gardner said he has his own platform: Colorado.

If he had been asked to speak at the RNC, he would have talked about what the state has accomplished under Republicans in Washington.

“How we’ve grown Colorado’s economy, how we’ll get back to that growing economy after COVID-19, how we’ve opened up Space Command, moved the Bureau of Land Management here, beginning construction on the Arkansas Valley Conduit, returned Anvil Points energy dollars, finished the VA hospital, new Stryker Brigade Combat Team at Fort Carson, expanded the operations at Schriever Air Force Base; you name it, the work we’ve done on the Great American Outdoors Act.

“There’s a lot of things we could talk about that’s made Colorado more successful.”

That wouldn't have been a welcome deflection from the party for Trump, just guessing. Gardner, however, has proven to be skilled at creating space from controversy when he needs to, yet spreading his arms when he needs a Republican embrace.

That is exactly the kind of convention this needed to be, but Charlotte ain't Yuma.

Joey Bunch: "I had a candid chat with a friend of mine who is a notable Republican pollster recently. He was worried, he confided."

INSIGHTS | Colorado voters of color lead the way to D.C.

Joey Bunch: "Soon after she announced she was running for president, Hillary Clinton met with 350 supporters at La Rumba night club in Denver on a hot summer night in 2015."

Joey Bunch: "More and more relief from the economic devastation of the coronavirus feels like a pipe dream, but politics has always had a way of making the blind see and the lame dance, if you listen to operatives tasked with creating an Election Day reality."

INSIGHTS | The John Bolton we knew in Denver

Joey Bunch: "I've never understood Donald Trump’s foreign policy, other than to negotiate from a position of strength, even if the position disregards what comes after. The Trump Doctrine is like a drawing up a football play in the dirt."

INSIGHTS | The less Hick says, the better his chances

Joey Bunch: "You're giving people the wrong idea at an unfortunate time with some of the things you're saying and doing, like ditching a subpoena and flubbing your take on race at a tense time in our political conversation."

Joey Bunch: "The life of Donald Trump is nothing if not a testament to the art of the deal. The deal on the table is the United States Space Command. Colorado will have to wait longer."

As the 2020 campaigns enters their final stretch, Coloradans are poised to pick a senator, who could determine which party controls the upper chamber amid a historic pandemic and the resulting economic downturn. Reporter Ernest Luning breaks down all the key races statewide.

Joey Bunch: "What you think is fair and what Washington thinks is fair are probably two different things. In a democracy you could do something about that. In reality all you can do is cast a ballot on Nov. 3 and complain a lot, not necessarily in that order."

Randy Corporon, who is an Aurora-based lawyer, radio host and new Republican National Committee member, has spread conspiracy theories about Democrats, claimed that former President Barack Obama’s “whole life story is such a scam,” and made sexist comments on Twitter.