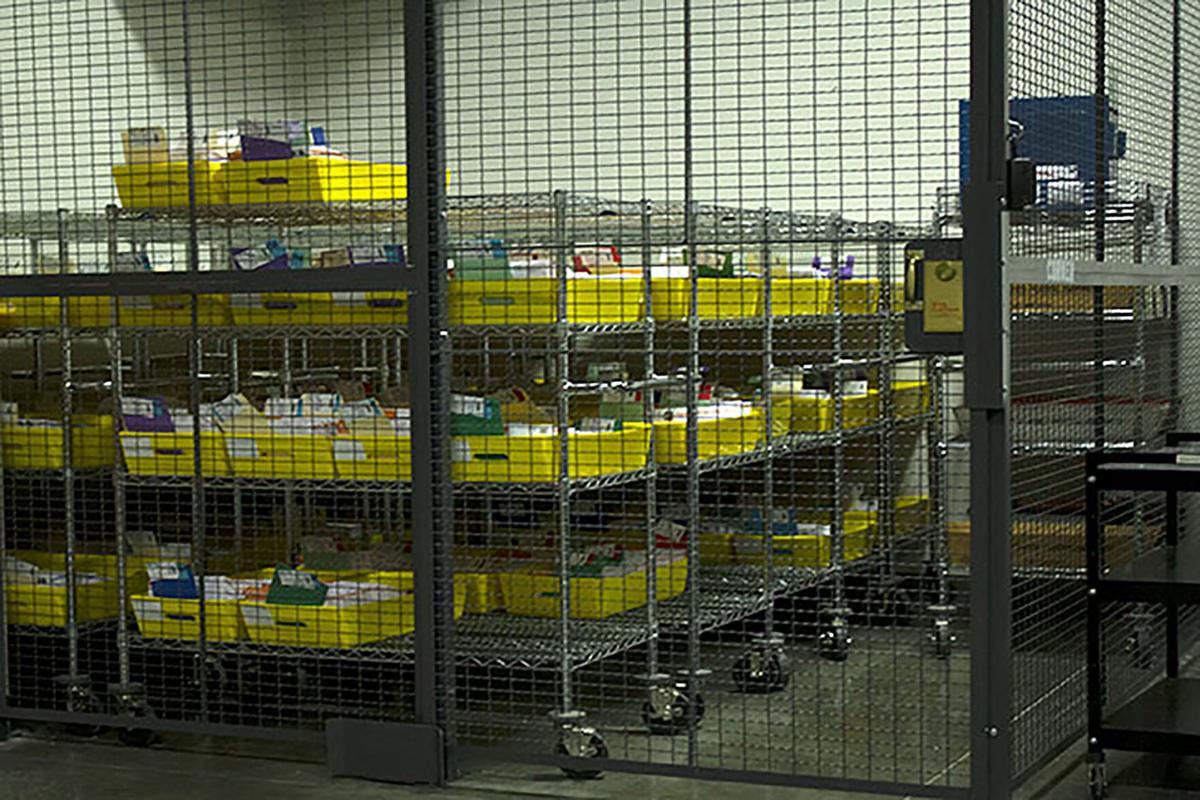 The Adams County elections team stores ballots on June 19, 2020, in preparation for the primary election at the Adams County Clerk and Recorder facility. With mail-in ballots, security is a top priority for them. 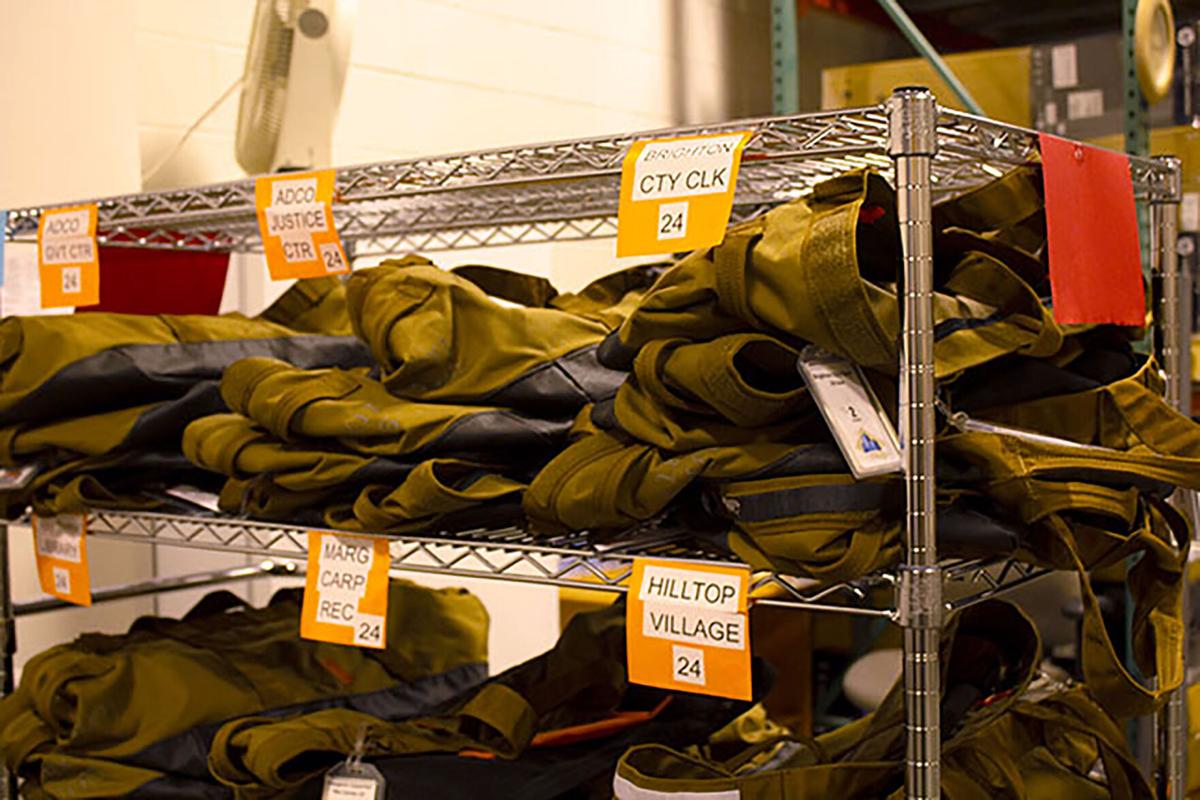 The Adams County Clerk and Recorder facility prepares ballot bags for one of the busiest days of the year. Ballot bags are color-coded and rotated after each delivery shift to ensure anonymity. 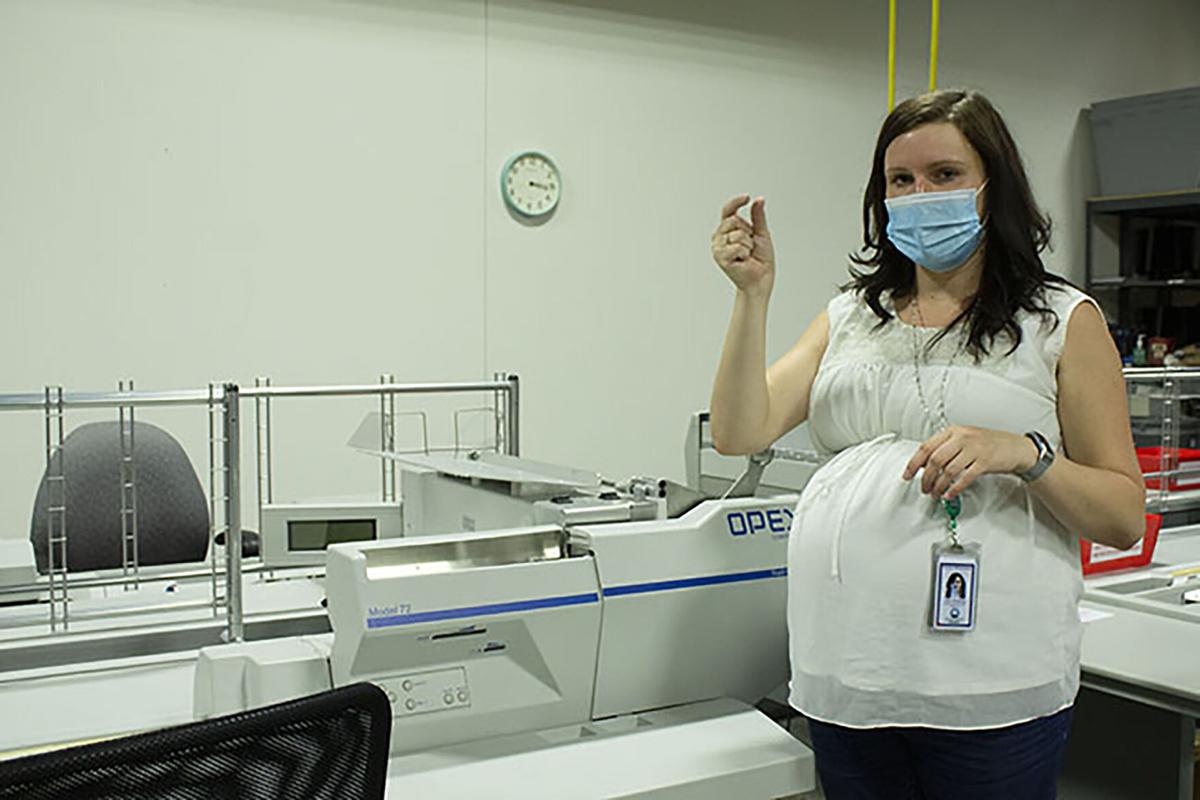 Elections administrator Jami Gaultney shows how workers do not touch ballots to open them on June 19 at Adams County Clerk and Recorder facility. This is especially important during the COVID-19 pandemic. 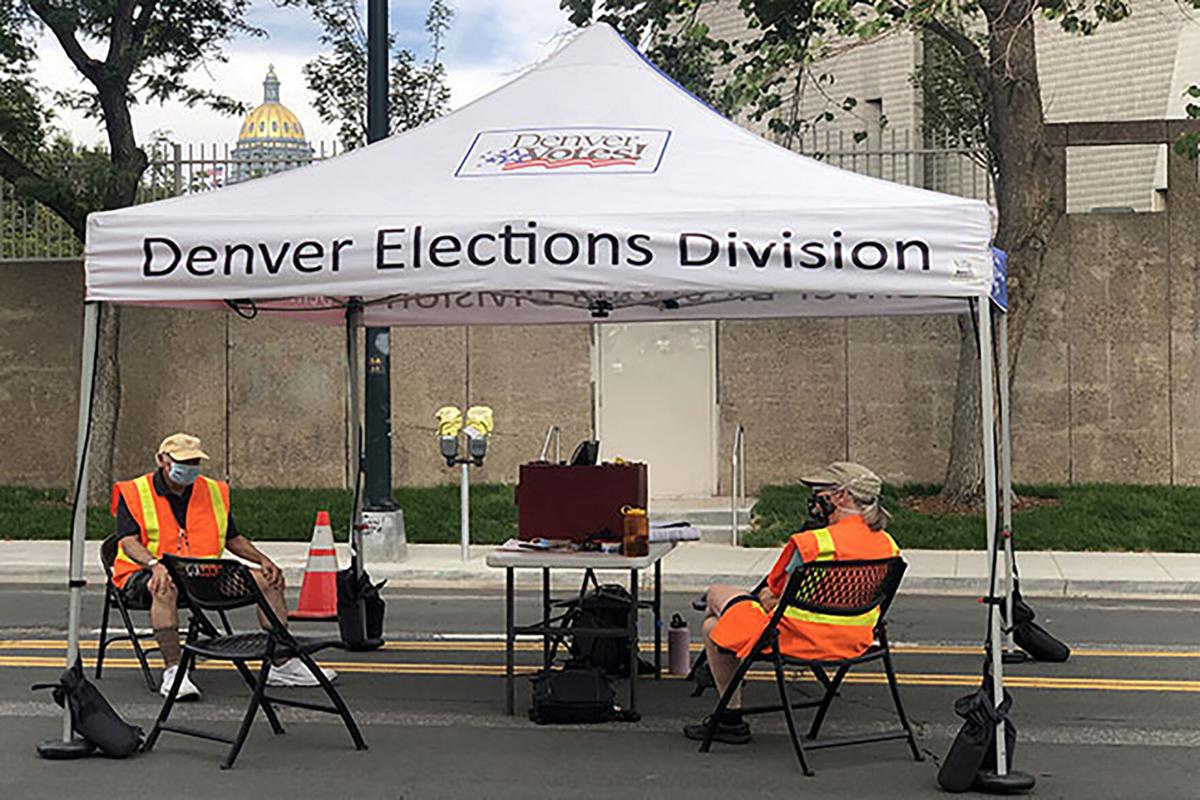 City workers watch over a Denver ballot drop-off location on June 29, 2020. Without the typical poll centers, dropbox locations filled up the city for the primary election on June 30.

The Adams County elections team stores ballots on June 19, 2020, in preparation for the primary election at the Adams County Clerk and Recorder facility. With mail-in ballots, security is a top priority for them.

The Adams County Clerk and Recorder facility prepares ballot bags for one of the busiest days of the year. Ballot bags are color-coded and rotated after each delivery shift to ensure anonymity.

Elections administrator Jami Gaultney shows how workers do not touch ballots to open them on June 19 at Adams County Clerk and Recorder facility. This is especially important during the COVID-19 pandemic.

City workers watch over a Denver ballot drop-off location on June 29, 2020. Without the typical poll centers, dropbox locations filled up the city for the primary election on June 30.

Think of Fort Knox — but with ballots instead of gold.

The door to the election room in Steamboat Springs is locked with a numbered plastic tag that breaks if it’s tampered with. A log shows when the room was sealed, what the seal number is and a record of everyone who enters. The election equipment inside is also sealed. The room is equipped with cameras that record continuously for 60 days before the election and 30 afterward. The recordings are kept for 25 months after the election has concluded.

“You would be blown away at the security requirements,” Kim Bonner, Routt County clerk and recorder, said of Colorado’s vote-by-mail system.

Colorado has found a solution for voting that is secure, convenient and appears ideal for the unusual circumstances created by a pandemic. Since 2013, the state has implemented and fine-tuned a mail-in voting system that is nearly tamper-proof and partially responsible for making the state second in the nation for voter turnout.

“Our system is set up to meet any sort of contingency,” said Pam Anderson, executive director of the Colorado County Clerks Association. “So it's not surprising to us that we’re perfectly positioned for a year like this.”

Colorado’s Secretary of State Office declared the state’s vote-by-mail model a success, even in a pandemic, noting record turnout for the state primary. Held at the end of June, in-person voting centers did not see lengthy lines or wait times. Nearly all voters, 99.3%, chose to return their ballots by mail or 24-hour drop box.

“Despite misleading attacks, disinformation and attempts to make vote-by-mail a partisan issue, Colorado’s election proves that mail ballots are the key to accessible voting during this health crisis,” Secretary of State Jena Griswold said in a July 1 press release.

Critics of mail-in ballot voting assert it's prone to fraud. But according to a Washington Post analysis, officials identified only 372 possible cases of double voting or voting on behalf of deceased people out of the 14.6 million votes cast by mail in the 2016 and 2018 general elections in the mail-ballot states of Oregon, Washington and Colorado. That’s 0.0025%. The clerk’s association says fraud is extremely rare, and Colorado’s model is designed to catch it when it happens.

Colorado and 29 other states work with the Electronic Registration Information Center to cross-match deceased voters, address changes and possible duplicate files. This results in a well-maintained voter registration list that ensures each voter gets a ballot in their mailbox.

After completing that ballot, Colorado voters must sign their ballot return envelope. Every signature on every envelope is reviewed by both Republican and Democratic election judges and is compared with the voter’s signature in the state’s database.

Once the election is over and the results tallied, an audit is conducted. The closer the race, the more ballots inspected. According to a press release from the clerks’ association, Colorado was the first state in the nation, back in 2017, to implement a publicly appointed statewide audit such as this.

“Since we have this audit, we can 100% stand behind our election results,” Koppes said.

“It's so much more convenient,” said Bill Skinner of Denver after walking his ballot to the drop box located in Washington Park. “Sitting down. Doing it at home where you don't have to worry about distractions.”

Mike Fehrenbacher, a 36-year-old software technology consultant, said getting a ballot in the mail is itself a reminder and makes him much more likely to learn about the candidates.

Voters receive ballots about 22 days in advance, which gives them the opportunity to know exactly what they’re voting on, become educated and make the best decision for themselves, Koppes said.

“A lot of things impact turnout. Getting a ballot in the hands of voters is certainly one of them,” she said.

Jill Thompson, a working mother in Denver, likes the ease of mail-in ballots. She recalled spending hours in line at her polling center when she lived in Houston.

Jackie Smith, a 39-year-old product designer, lost her opportunity to vote one year when a sudden business trip took her away from her Boston home. Massachusetts, which doesn’t vote by mail, did offer absentee ballots to voters. However, Smith’s trip was assigned after the deadline to request one had passed. Smith, now living in Denver, is appreciative of Colorado’s model.

Only Colorado and four other states offer vote-by-mail for all elections, according to the National Conference for State Legislatures. At least 21 other states allow some local elections to be conducted by mail, which is often an early step toward going all-mail, all the time.

In light of the pandemic, Colorado elections officials have been fielding calls from their colleagues in other states as many in the nation consider remote options. Koppes has had 2- and 3-hour conversations with people interested in moving to her state’s model.

“That is how complicated and secure mail-in ballot elections actually are,” she said.

But Bonner noted that there’s conflicting opinion among Colorado’s election officials about whether its system could be implemented in other states before this year’s general election.

“We are very quickly approaching the go / no-go for major changes,” Anderson said.

Sara Rosene, clerk and recorder for Grand County, suggested other states look at all the pieces involved and realize that it’s a slow process.

“It wasn’t an overnight thing,” Rosene said of Colorado’s current system, which evolved over time starting with counties getting the option to conduct mail ballot elections in 1993. The state had building blocks ready, such as a solid base of voter registrations with scanned signatures on file and experience with running mail-in elections in odd years, before the 2013 Voter Access and Modernized Elections Act passed.

It really depends on what each state already has in place and what resources they will need to implement something new. Anderson recommended policy makers, politicians and interest groups ask their local election officials what’s doable.

While many Colorado voters tout the convenience of their state’s system, some of them also pine for the feeling of community they remember getting when voting in person on Election Day.

“I think the only downside is that people like the social aspect of it. And it’s kind of tradition for them to vote on Election Day,” Bonner said.

“Sometimes I have a feeling that people don’t participate or follow politics as much,” Smith said. “That’s just how I perceive it because there’s not that conversation of ‘Oh, did you vote today?’” People may have cast their ballot two weeks earlier, diluting that sense of camaraderie.

Christina Kreps, an anthropology professor at the University of Denver, said she used to enjoy going to the polls and seeing her neighbors in line. But she likes the ease of her neighborhood dropbox more.

Further, she was concerned this year for voters in other states like Wisconsin, Pennsylvania and Indiana who encountered long wait times and difficulty maintaining social distancing during their primary elections.

“They’re literally risking their lives,” she said. “I just think that’s absurd when we have alternative means.”

“I think you’re going to see the rest of the country looking at more remote options and access points for voters, given the pandemic,” Anderson said. “For Colorado, we have so many options. I think we have a model that is hard to beat.”

Boulder County Republicans allege they're not getting a fair look at ballots being examined as part of a route audit of the Nov. 3 election.

Colorado’s use of drop boxes and the timeline for sending ballots make the state more prepared to weather a postal service slowdown this election, Secretary of State Jena Griswold said on Wednesday.