Two former Republican secretaries of state are asking a judge to block an order issued by the Colorado GOP to add a second candidate to an El Paso County legislative primary ballot, arguing the state party is trying to force a volunteer to violate the law.

Scott Gessler, an election law attorney who served as Colorado's chief election officer from 2011 to 2015, asked for an injunction in Denver District Court late Monday to prevent the Senate District 10 Republican chairman from filing a document designating David Stiver to the primary ballot for the district, which covers north-central Colorado Springs.

Reacting to what governing bodies of the Colorado Republican Party determined last week were "election irregularities" in the GOP assembly that put state Rep. Larry Liston on the senate district primary ballot, the state party ordered district chairman Eli Bremer to submit a form saying that both Liston and Stiver, a veteran party activist, had qualified for the primary. Stiver hadn't received the votes of at least 30% of the delegates, as the law requires.

Wayne Williams, a Colorado Springs at-large city councilman and Gessler's successor as secretary of state, said he'll ask to intervene in the lawsuit on behalf of Liston, who is so far the only Republican running in the June 30 primary for the seat held by term-limited state Sen. Owen Hill.

"The attorneys say they believe I’ve been asked to do something illegal," Bremer told Colorado Politics after learning the lawsuit had been filed. 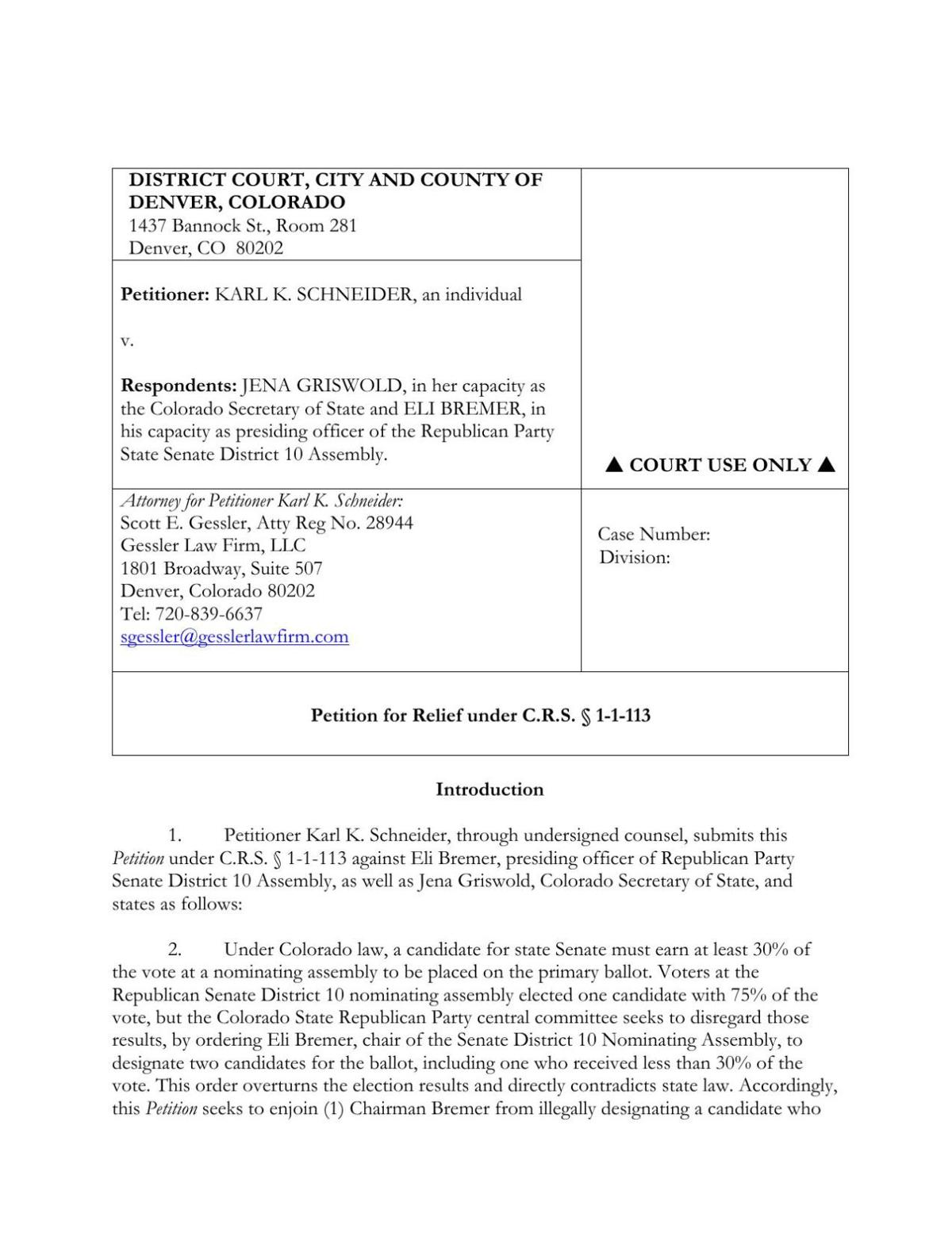 He stressed the lawsuit isn't alleging he did anything wrong, but that he's being sued in his official capacity so a judge can determine whether complying with the party's order is within the law.

"It wasn't a surprise. We’ll await whatever the court says," Bremer said.

In a court filing submitted on behalf of Karl Schneider, the senate district's Republican vice chairman, Gessler argued the sworn document Bremer was ordered to sign on Friday by U.S. Rep. Ken Buck, the state Republican Party chairman, would amount to a violation of state law, which says only candidates who meet the 30% threshold can be included on the ballot.

At the Senate District 10 assembly, which was held online on March 22, Liston received about 75% of the vote, and Stiver received about 25%. After it concluded, Stiver and several GOP allies filed a complaint with the state party alleging the assembly had been riddled with difficulties, including violations of party bylaws.

The state GOP's executive and central committees last week sided with Stiver and said the only "equitable remedy" would be to put him on the ballot, which led Buck to tell Bremer to file the designation of candidacy over Bremer's objections.

A spokesman for the Colorado GOP declined to comment on the lawsuit.

"I am very much looking forward to having this go outside the political arena," Bremer said. "I’m going to let the attorneys duke it out, and I’ll do what the court says."

The lawsuit also asks the court to prevent Secretary of State Jena Griswold, the Democrat who unseated Williams in the 2018 election, from certifying Stiver as a candidate, because he didn't receive the necessary support at the Republican assembly.