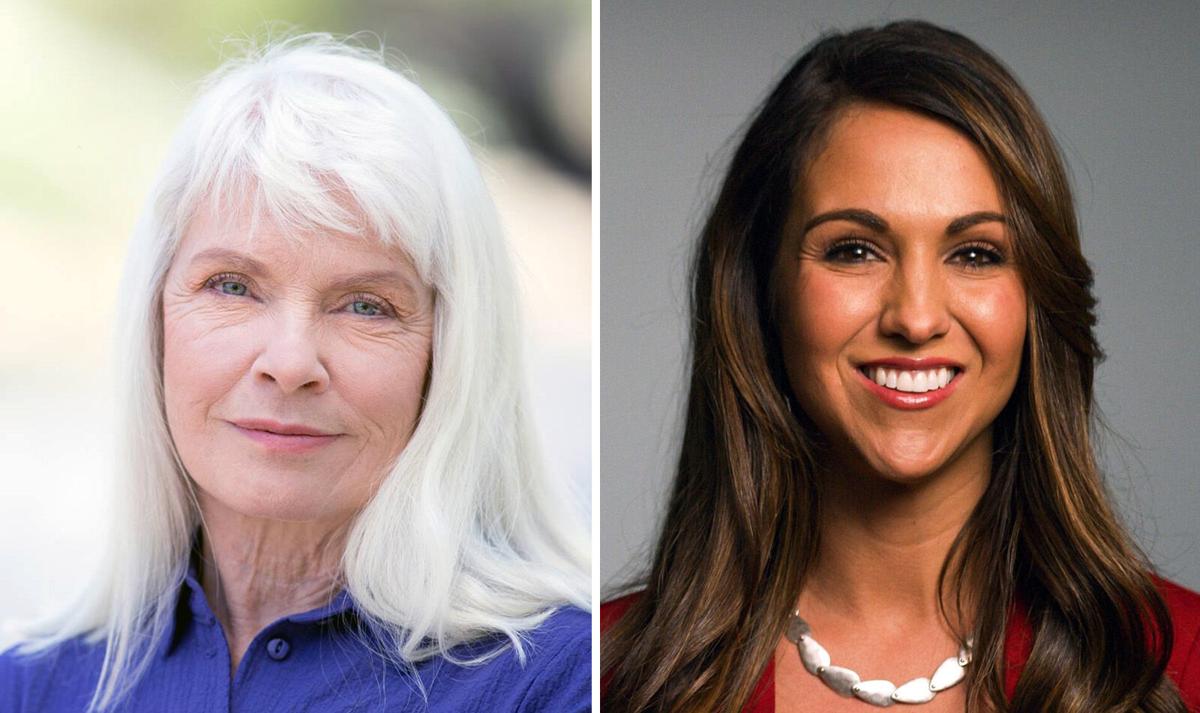 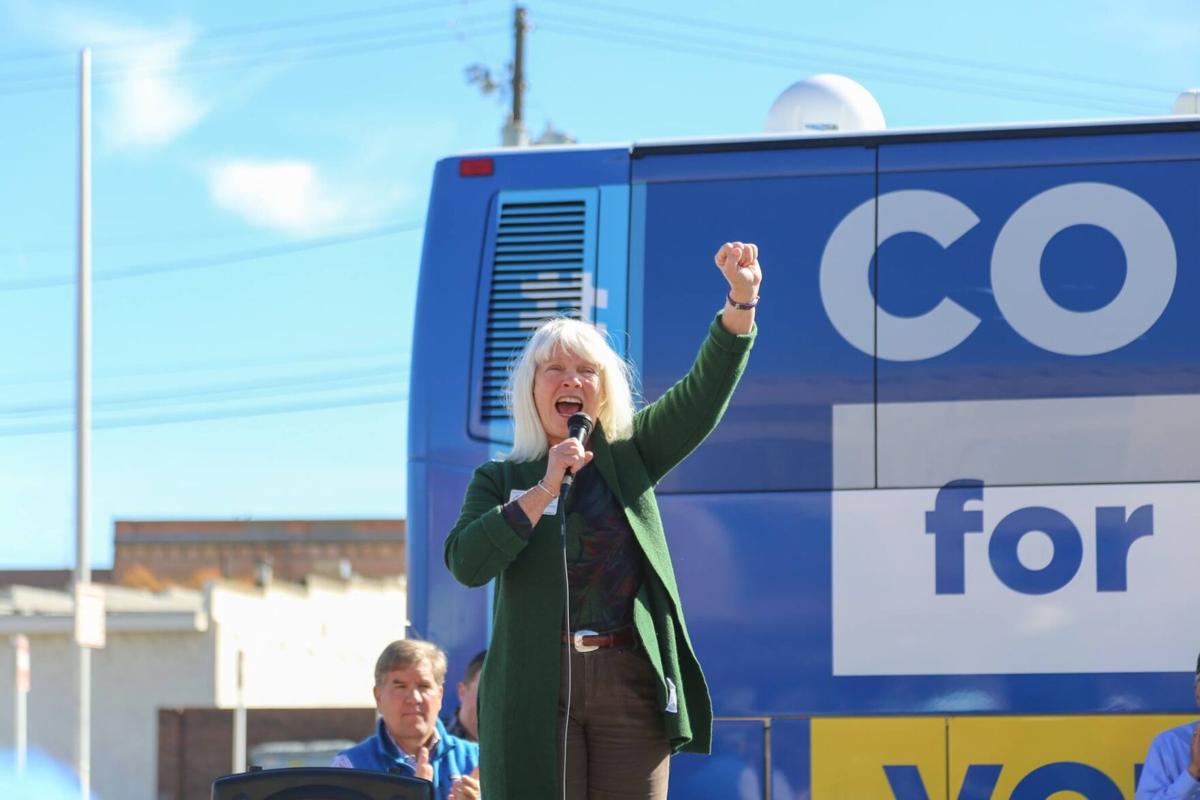 Diane Mitsch Bush campaigns for Congress in this undated 2018 photo. In her 2020 campaign, Mitsch Bush has not held public events because of the coronavirus outbreak. 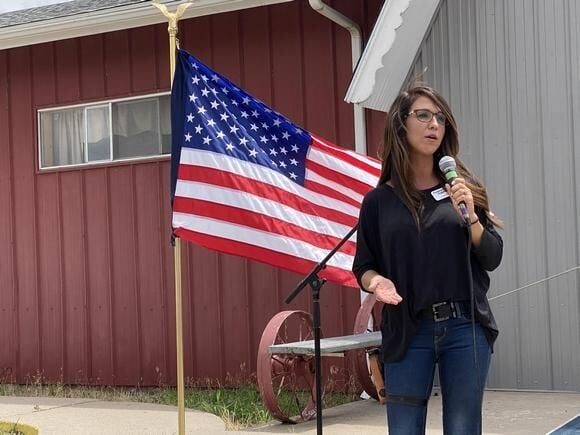 On July 27, 2020, Lauren Boebert, congressional candidate for Colorado’s 3rd Congressional District and political newcomer, brought her campaign to Pueblo — a place she called “the most energetic in the district.”

The two major-party candidates running for Colorado’s suddenly open 3rd Congressional District seat attacked swiftly after their primary wins, each scrambling to portray their opponent as a dangerous extremist.

From the moment Lauren Boebert, the owner of Rifle’s Shooters Grill and a longtime gun-rights activist, shocked U.S. Rep. Scott Tipton with a 9-percentage-point win in the June 30 GOP primary, Democrats depicted the novice politician as out of step with the sprawling, largely rural district’s values.

Mitsch Bush accused Boebert of palling around with members of “far-right militia with connections to violent white supremacists,” and Boebert’s campaign has taken to referring to the Democrat as a “social worker,” which at least shares a syllable with the career the former sociology professor had before winning election to the Routt County Commission.

On July 30, in a tweet retweeted by Boebert, national Republicans called Mitsch Bush a “sleazy liar,” claiming the Democrat is attempting to backtrack from previous statements of support for the single-payer Medicare for All proposal and the Green New Deal, a sweeping set of policies to tackle climate change.

The choice before voters is also being framed as between a Democrat with a record of public service — including bipartisan legislation on matters important to the district, like agriculture, transportation, and conservation — and the upstart, media-savvy Boebert’s vow to take on U.S. Rep. Alexandria Ocasio-Cortez, the firebrand New York Democrat known as AOC.

Although she said she was running to be the conservative “antidote to AOC,” Boebert told Colorado Politics she wants to get things done in Congress and represent her district.

“I’m fine with working with anybody,” she said. “The problem is when I have to compromise my beliefs in hopes of getting what I want done. That’s what Republicans have been doing, and we never get what we want out of the deal. We are always the ones compromising our beliefs, and the Democrats always want more. It’s never enough for them. That’s the whole reason I got into this. I didn’t see many of our representatives standing up for freedom. I saw them giving our freedoms away.”

THE RACE FOR CD3 | About the candidate: Diane Mitsch Bush

Mitsch Bush sounded skeptical that her opponent wanted to campaign on the issues.

“From Day One, they used the word ‘socialist’ four times in one sentence," she said. "That’s what they say, and that’s what they’ll continue to say. ‘Crazy, looney lefty.’ Well, excuse me, tell that to all the Republicans that I co-primed bills with in my years in the Colorado House. I was known as one of the most bipartisan legislators around, and I worked with primarily rural legislators” — she named a number of Republican lawmakers from the Western Slope — “on pragmatic bills.”

Both sides appear to be happy to make the election, in part at least, a referendum on President Donald Trump, whose support even among Republicans has been slipping but who remains popular with rural voters.

Boebert told Colorado Politics she would welcome a visit by Trump to the district but acknowledged that could depend on the course of the coronavirus pandemic and whether the president resumes his signature campaign rallies before Election Day.

She added that she nonetheless expects to see Vice President Mike Pence and other Trump surrogates campaigning in the district, with stops likely in Pueblo and Grand Junction, the two largest population centers in the district.

Mitsch Bush said she would be happy if presumptive Democratic nominee Joe Biden campaigns in the district but sounded a bit puzzled at the suggestion.

Neither has yet been invited to join the candidate-boosting programs their national parties run for House challengers — on the Republican side, it’s the National Republican Congressional Committee’s Young Guns program, and on the Democratic side it’s the Democratic Congressional Campaign Committee’s Red to Blue program — but both organizations have embraced the nominees and say to expect a vigorous, well-resourced campaign.

A DCCC aide noted that the organization put the district on its list of battlegrounds early last year and plans to remind voters that Boebert has flirted with the unfounded, far-right QAnon movement.

During an online interview earlier this year, Boebert said she hoped the conspiracy theory was real, but after her primary win issued a statement saying that she was “not a follower.”

THE RACE FOR CD3 | About the candidate: Lauren Boebert

A spokesman for the NRCC didn’t respond to an inquiry from Colorado Politics, but the organization has said it plans to put its resources behind Boebert to keep the seat in the GOP column. She’s also been met with a warm embrace from Trump, who cheered her primary win and called her a “dynamo” when she met Trump back stage before he delivered his Independence Day speech on July 3 at Mount Rushmore.

Boebert has said a top priority if she wins a seat in Congress is to join the ultra-conservative House Freedom Caucus.

“I just love that they debate the constitutionality of a bill before they vote on it,” she said, noting that U.S. Rep. Ken Buck, a member of the group and chairman of the Colorado Republican Party, has put her in touch with some of its key players.

“Even with this pandemic, it’s not government’s role to go in and shut everything down, to go in and shut down small businesses,” said Boebert, who got national attention when she reopened her restaurant in May in defiance of public health orders.

“That’s not the proper role of government. Government’s role is to inform us of the risk, and just like with anything else, we have personal responsibility and make a decision of what risks we want to take, along with every other risk we take in life.”

Mitsch Bush said she also believes the election is about the Constitution.

“We have so much more that unites us than divides us,” she said. “We’re at a real tipping point in our country. Our democracy’s in danger. We have to remember what the Constitution really is — it’s checks and balances, it’s separation of power, and it’s the rule of law. With regard to the rule of law, nobody is above the law — all of us, we have to abide by the rule of law.”

Mitsch Bush said she sees three broad problems: “We need to reclaim our democracy, we need to recover from COVID, and we need to rebuild our communities. And that’s why I’m running for Congress.”

She added: ““Our economy here in Colorado’s 3rd district depends on the conservation of water, protecting our public lands and our environment. They are essential to our outdoor recreation, manufacturing, and tourism industries, and they sustain our farmers and ranchers. I’ll always protect our public lands and our water. People in this district know it’s not an issue of the economy or the environment, it’s the economy and the environment.”

Whichever candidate wins, Colorado’s 3rd CD will send a woman to Congress for the first time in the district’s 106-year history, making Mitsch Bush or Boebert only the fifth woman elected to Congress to Colorado. One of them will join Pat Schroeder, the Denver Democrat who represented the 1st Congressional District from 1973-1997, her successor, Democratic U.S. Rep. Diana DeGette, and the two women who represented the 4th Congressional District last decade, Republican Marilyn Musgrave and Democrat Betsy Markey.

THE RACE FOR CD3 | This got a lot more interesting, observers say

THE RACE FOR CD3 | About the 3rd District: Voters lean Republican, but Democrats have made inroads

3RD CD OPINION | How to win the 3rd? Look back to John Salazar

Time in the campaign season might be running short, but better late than never for President Trump to embrace U.S. House candidate Lauren Boebert.

Just over a month after she upset five-term incumbent U.S. Rep. Scott Tipton in the Republican primary, Lauren Boebert landed a spot Wednesday in the top tier of the House GOP's campaign support program for candidates in competitive districts.