Secretary of State Jena Griswold is asking the Colorado Supreme Court to overturn a decision that added a U.S. Senate candidate to the Democratic primary ballot despite her failing to collect enough petition signatures, saying the lower court ruling was unfair to those who did.

Late Friday night, Griswold appealed a decision handed down Tuesday by Denver District Court Judge Christopher J. Baumann, who ruled that Michelle Ferrigno Warren had qualified for the ballot with 5,383 valid signatures — just over half the 10,500 signatures required for statewide candidates — because her petition efforts were stymied by the coronavirus pandemic.

The ruling added Warren to a primary ballot that already listed former Gov. John Hickenlooper, who qualified by petition, and former state House Speaker Andrew Romanoff, who emerged from the caucus and assembly process.

The winner of the June 30 primary will face U.S. Sen. Cory Gardner in a contest that could determine which party holds the Senate majority after the November elections.

Baumann ruled that Warren "substantially complied" with signature requirements, considering her circulators "had to collect petition signatures in the shadow of a global pandemic and looming public health emergency."

Petitions were due March 17, a week after Gov. Jared Polis declared a state of emergency in response to a growing number of coronavirus cases.

Griswold, represented by an assistant attorney general, argued that Baumann's ruling was unfair to candidates who complied with statutory requirements, as well as candidates who who failed to collect enough signatures but didn't ask a judge to overlook their shortfalls.

A spokeswoman for the Secretary of State's Office said in a statement that Griswold "recognizes the challenges posed by the coronavirus" but wants the courts to "apply a uniform standard across the board out of fairness to all candidates."

“That’s why the Secretary of State’s Office is appealing the Ferrigno Warren District Court case. Given the gravity of this decision, the Colorado Supreme Court should have the opportunity to weigh in and we hope it will issue a uniform standard that can be applied to all similar cases," said Betsy Hart, Griswold's spokeswoman. 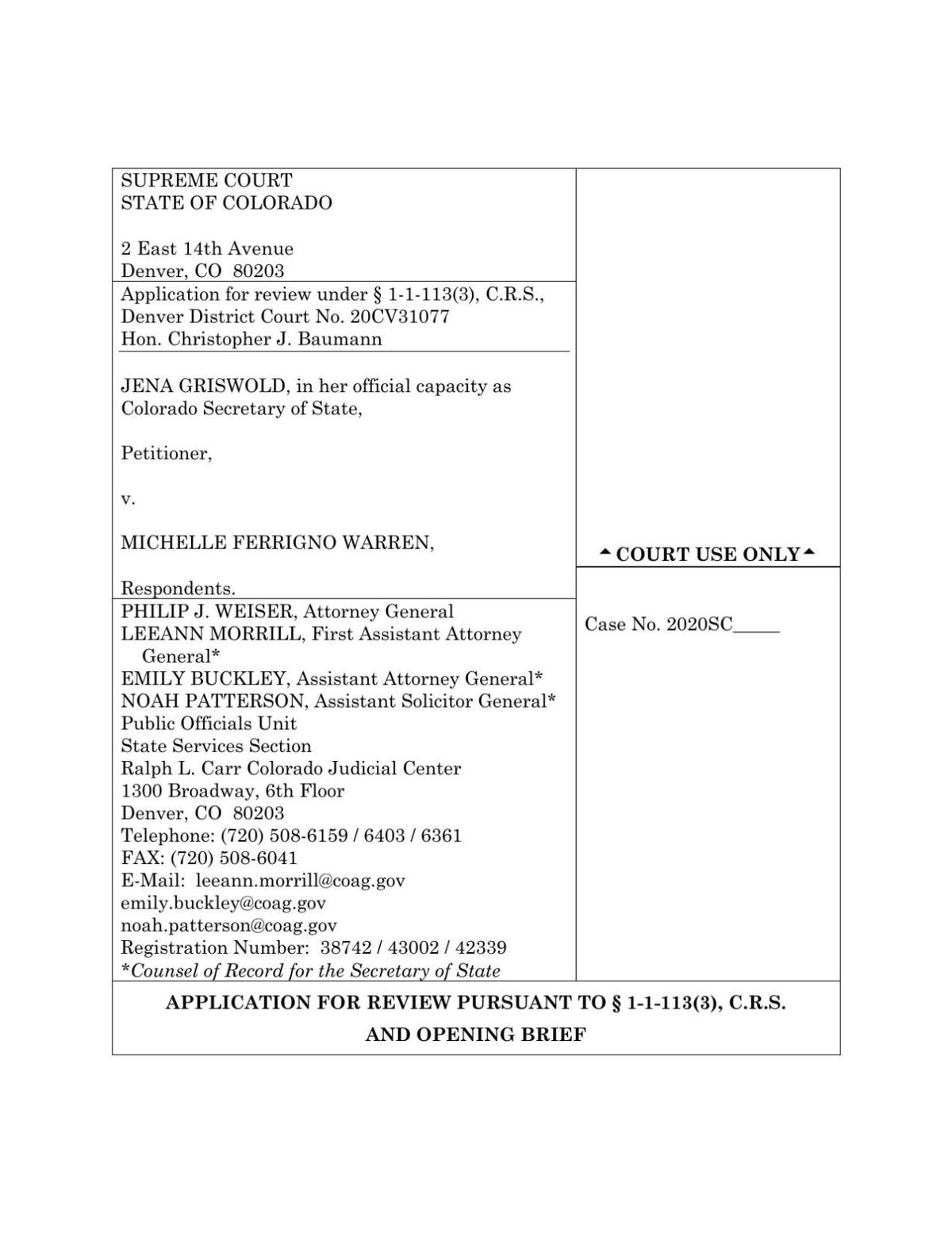 The appeal asks the state's high court to establish a stricter standard than the one adopted by Baumann to determine whether petitioners who faced difficulties caused by the pandemic can get by with fewer signatures than the law requires. Under Griswold's proposed formula, Warren wouldn't qualify for the primary.

“It’s very telling the Colorado Secretary of State waited until the late hours of Friday night to release this appeal,” Warren said in a statement.

“This reeks of D.C-style politics and everything wrong with our government. The role of the Colorado Secretary of State is to oversee fair and just elections and empower voters at the voting booth, not cherry pick who makes the ballot in the midst of a pandemic.”

She added that she is confident the Supreme Court will agree with Baumann's ruling and keep her on the ballot.

Bray, with fewer than 3,000 signatures ruled valid by the Secretary of State's Office, argued her case before Baumann on Friday and expects a ruling before the end of the month. Garcia, who collected 9,428 valid signatures, filed her challenge on Friday.

The secretary of state must certify ballots by May 7, and they start going in the mail to most state voters on June 9.

"I cannot think of a better way to extend equity in the Democratic process than doing so in the middle of a global pandemic," Bray said.