People shelter in the House gallery as protesters try to break into the House Chamber at the U.S. Capitol on Wednesday, Jan. 6, 2021, in Washington. 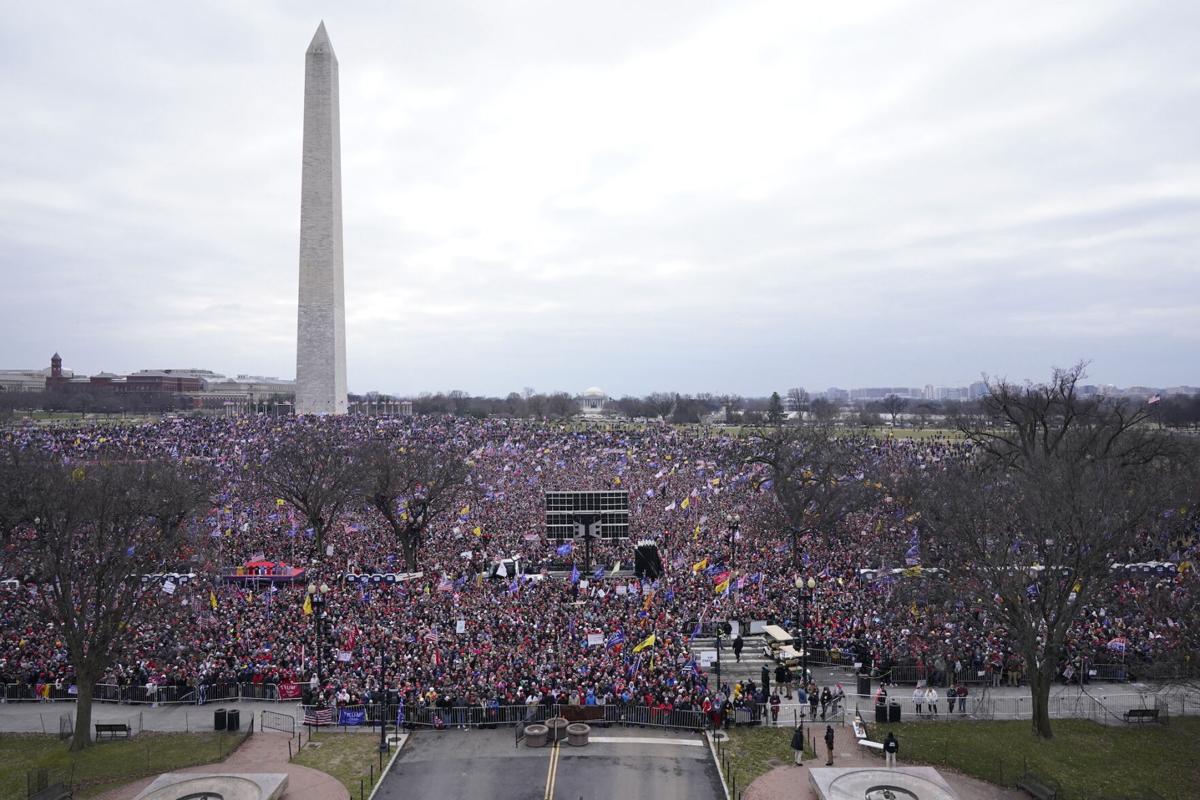 With the Washington Monument in the background, people attend a rally in support of President Donald Trump on Wednesday, Jan. 6, 2021, in Washington.

People shelter in the House gallery as protesters try to break into the House Chamber at the U.S. Capitol on Wednesday, Jan. 6, 2021, in Washington.

With the Washington Monument in the background, people attend a rally in support of President Donald Trump on Wednesday, Jan. 6, 2021, in Washington.

A mob that breached the U.S. Capital Wednesday disrupted a debate over the Electoral College votes supporters of President Trump don't trust.

That distrust and acrimony in the Capital flowed in from the outside, yet the business of seating Joe Biden as president has to go on.

That means the debate was interrupted and the path forward will be inevitably historic, as the Republican president tries to remain in the White House behind a dedicated base that is likely alienating those not quite so passionate for Trump.

The way forward was not immediately clear in the immediate aftermath.

The fractious day on Capitol Hill shaded the news that Democrats clinched control of the new Senate, after narrow wins in a George runoff Tuesday. That fact provided a backdrop to the federal power struggle, after Trump had warned of among claims he was cheated since the Nov. 3 election.

Early in the day. U.S. Rep. Doug Lamborn of Colorado Springs Lamborn was out front of the fight early Wednesday on the president's love-hate medium, Twitter.

"I take my oath to the Constitution seriously," he tweeted, over a video of him signing a petition. "This is why I signed the objections of the Electoral College results from 6 states. We must fight for the future of our republic & our democracy. Millions of Americans voted for @realDonaldTrump. Their voices must be heard. #JAN6."

Colorado has relied on mail ballots since 2013. Lamborn has won four re-elections since and registered no notable complaints about cheating in Colorado.

Joey Bunch: "Congress holds investigations, but our legislature only writes and votes on bills. The best the Legislative Audit Committee could do is order a performance audit of the Secretary of State's Office."

A half hour earlier, Lamborn retweeted a post from Louisiana Rep. Mike Johnson in support of the ill-fated congressional insurgence.

"Today is the day," Lamborn tweeted, "I will stand up to defend the Constitution and fight for @realDonaldTrump."

The Colorado Democratic Party also was arguing ahead of the big fight in Washington, namely calling out Lamborn and freshman Rep. Lauren Boebert of Rifle for marching to Trump's beat.

“Trump, Boebert, and Lamborn are trying to overthrow an election because they don’t like the outcome," state party chair Morgan Carroll said. "They are setting a new and dangerous precedent unseen in this nation’s history — to refuse to accept election results if your preferred candidate does not win. This is an affront to our basic principles of democracy, free and fair elections, and it is a waste of the taxpayers’ time and money.

‘These attacks have a cost,’ Weiser says of Trump, lawmakers’ plot to overturn election results

“For anyone who believes in our Constitution and our commitment to federalism, you need to oppose this,” said Attorney General Weiser.

"Boebert and Lamborn need to do their jobs and actually serve their constituents — not Donald Trump and Rudy Giuliani.”

She added, "... Boebert and Lamborn continue to embarrass themselves by pushing conspiracy theories about supposed 'voter fraud' with zero evidence to show for it."

Boebert, however, foreshadowed a presentation of evidence Wednesday, though without committee hearings there won't be witnesses who can present that evidence, have it vetted by questions and cross-examination, as things happen in congressional investigations or court proceedings.

"Please listen very carefully to the evidence today," said the controversial new conservative member. "Wanting America to have free and fair elections should not be a partisan issue."

She spoke on the House floor before the disruption and lockdown.

A day earlier, she released commercial depicting going armed at the Capitol and talking about her rights to do so. She began her speech on the House floor with a joke about guns.

"To ease everyone's nerves, I want you to know I'm not here to challenge anyone to a duel, like Alexander Hamilton or Aaron Burr," she said of the famous 1804 pistol duel between the treasury secretary and vice president, resulting in Hamilton's death and Burr's arrest.

U.S. Rep. Diana DeGette, a Democrat from Denver said Wednesday morning she expected "ranting and raving," she said in an early tweet Wednesday.

She followed up after GOP members, led by Texas Sen. Ted Cruz, objected to certifying the electors in Arizona, the formerly red state Biden won by 10,457 votes.

"The Arizona Supreme Court has already unanimously rejected the GOP’s attempt to challenge the election there," DeGette said, nodding to Cruz's likely run for the party's nomination in 2024. "This is nothing more than a shameful publicity stunt."

Rep. Ken Buck from Windsor was less strident than other partisans, however.

"I share the concerns of many voters across the country about irregularities in the presidential election," said the high-profile member of the House's ultra-conservative Freedom Caucus. "I also share their disappointment with President Trump’s loss.

The Lafayette Democrat, serving his second term representing Colorado's 2nd Congressional District, is one of four lawmakers tapped by House Democratic leadership to manage the response to efforts by at least a dozen GOP senators and more than 100 House Republicans to block certification of Biden's 306-232 Electoral College win.

"However, the Founders trusted the states to decide elections, not members of Congress."

Buck wrote an op-ed in The Washington Post Tuesday calling on fellow Republicans to ease off the accusation throttle, which he said is how Democrats play the political game.

"Republican members of Congress may soon regret that they have adopted not only the rhetoric but the actual tactics from that playbook in their attempt to reject the 2020 election results," he wrote.

Post subscribers can read that op-ed by clicking here.

Rep. Jason Crow said it was a matter of duty and commitment to American ideals.

"We swore an oath — in the military and in Congress — to support and defend our Constitution," he tweeted. "Our vote today is bigger than a single election. It’s about honoring that charge and preserving the future of our democracy.

"And we will never back down when our democracy is threatened."

Rep. Ed Purlmutter said it was about Congress doing its job Wednesday.

"Our job is not to overturn the will of the voters or the states, it's to certify their decision," the Arvada Democrat tweeted. "I urge all of my colleagues to reject these frivolous & dangerous objections to the vote of the #ElectoralCollege & join w/ the country in supporting a peaceful transition of power. "

Colorado Democratic Secretary of State Jena Griswold, a defender or mail ballots, put out a statement Wednesday after the day's doings in Washington.

“American voters, not DC politicians, are responsible for choosing the President of the United States," she stated. "Suggestions that the Vice President or a member of Congress could unilaterally change the electoral results--which the states have already certified--are incorrect, undemocratic, and aim to disenfranchise

"Americans voters. Throughout history, America has endured many threats to our democracy, and our democracy will continue to prevail.”

Support grew Tuesday for an argument spelled out by U.S. Rep. Ken Buck opposing an attempt by fellow Republicans to undo the results of the presidential election.

Jimmy Sengenberger: "Let’s be real: The 2020 presidential election is over."

The Army Ranger combat veteran recounted the harrowing stretch when he was trapped in House chambers with more than a dozen other lawmakers and Capitol Police officers, who barricaded the doors and drew their guns to keep the rioters at bay.

Colorado Politics obtained an email string Thursday that included Dale Anderson's communication with other House chiefs of staff, exchanging information about the crisis, including when it would be safe to come out of sheltering in place.

The freshman Republican from Rifle was one of the last House members to speak before protesters stormed the Capitol and forced lawmakers to halt debate over objections by some Republicans to certifying Joe Biden's election win over President Donald Trump.